Los Angeles, CA, (The Hollywood Times) 8/19/2021–“The Dodger uniform is an iconic part of the franchise’s identity. While our traditional look has and will always be worn by the franchise-great players, the City Connect program offered us the opportunity to recognize the impact and importance of our multicultural fanbase,” said Lon Rosen, Dodger Executive Vice President, and Chief Marketing Officer. “We’re excited to debut these City Connect uniforms on the field and know our fans will enjoy seeing ‘Los Dodgers’ on the uniforms as well as our new murals, which bring Los Angeles’ street art culture to Dodger Stadium.”

The Los Angeles Dodgers unveiled their Nike MLB City Connect Series uniforms today, which will be worn on the field against the New York Mets tomorrow (Aug. 20) and Saturday (Aug. 21).

The uniforms are part of Major League Baseball and Nike’s City Connect Series, which is meant to explore a franchise’s relationship to its city as well as the unique personalities, values, rituals, and traditions of its fans.

The Dodgers’ City Connect uniforms, which commemorate the 40th anniversary of Fernandomania, include ‘Los Dodgers’ on both the uniform cap and jersey-front, to honor the team’s bond with its Latino fans.

With the classic team lettering and red numbers on the jersey-front, the design honors the club’s uniform tradition, but for the first time in franchise history, the team wears Dodger blue jerseys and pants.
A splash of spray paint on the uniform’s sleeves is a tribute to the city’s street art culture and the murals that provide color to buildings all throughout Los Angeles.

Edward James Olmos, a film actor, director, and producer, narrates the team’s City Connect premiere video, which features the murals. Starting at tonight’s game, the murals will be on display.

Roggin & Rodney will broadcast live from the Santa Monica event on the home of the Dodgers, AM 570 LA Sports, on Friday from 12:00 p.m. to 3:00 p.m. iHeart Los Angeles will be providing live entertainment at both events. 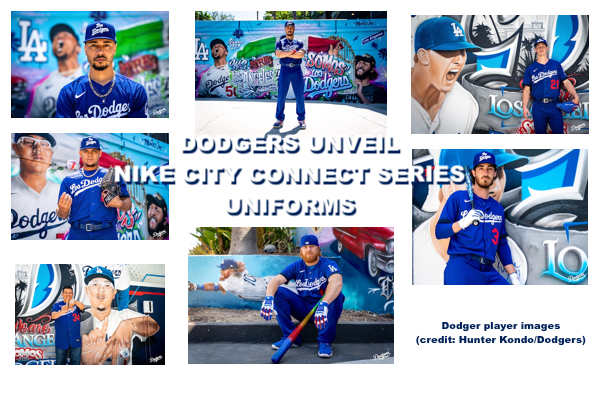 Dodgers.com/CityConnect has further details for fans.