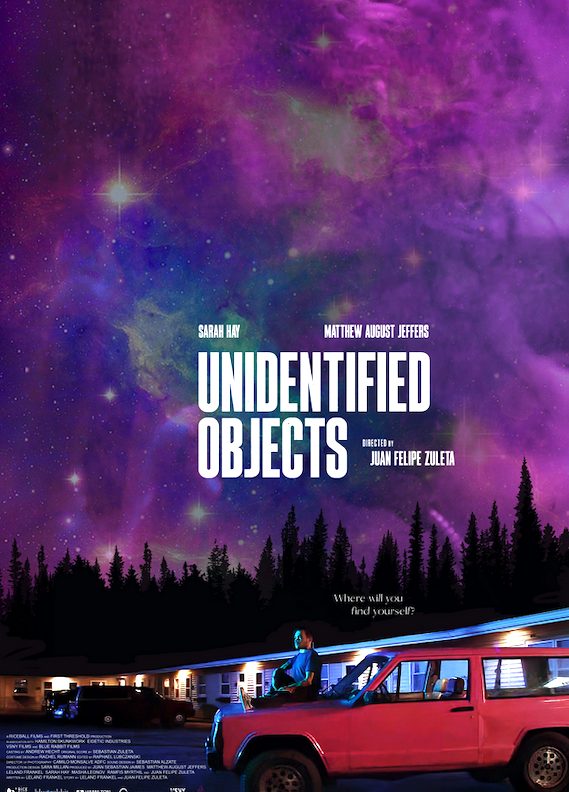 Los Angeles, CA (The Hollywood Times) 9/20/22 – Gracing Cinema Diverse 2022 is Juan Felipe Zuleta’s quirky but moving character piece Unidentified Objects (2022), which screens on Thursday 9/22 T 5:15 pm and Sunday 9/25 at 3 PM at the Palm Springs Cultural Center. Peter, a self-described “college-educated, homosexual dwarf,” keeps to himself in his apartment as he reels from the recent loss of his closest friend. His solitary existence is up-ended when his quirky neighbor Winona shows up at his door with a favor to ask: she’d like to borrow his car so she can drive to the remote Canadian field where aliens are due to beam her aboard their spaceship. Led by a sensational pair of performances from Matthew Jeffers and Sarah Hay, this disarming and wholly original take on the road trip comedy finds its charm and its power in spotlighting characters who rarely get the lead roles. Directed with a fabulous visual flair by Juan Felipe Zuleta, this film brings a previously sidelined character to take center stage.

In our interview with director Zuleta, shared: “Our film is a platonic love story about finding connection in a divided world that reflects my own experiences adapting to a new country. If Unidentified Objects can show even one restless soul how much they matter, then all of our work and sacrifice was absolutely worth it.” Lead actor Jeffers is a 30-year-old little person (LP) who was born with a form of dwarfism so rare that it was initially only referred to as “Matthew’s Disease.”  Unidentified Objects is his feature film debut, following an acclaimed theatre career in New York City, and TV work including The Marvelous Mrs. Maisel and New Amsterdam.

“Aside from Unidentified Objects, every part I have played on stage and screen was written for a person of average height,” says Matthew Jeffers. “I’ve always had to go into the audition room and change a director’s mind about how they see a role. But this project marks a change for me and for all of us in the LP community. So, I’m here with my shovel to try and pave the way for others as much as I can.”

Peter Hobbes (played by Matthew Jeffers) is a quiet man who prefers to avoid his neighbors. He’s tired of being objectified because of his dwarfism, and at this point in life he’s also dealing with unemployment and the recent loss of a much-loved friend. He’s also gay, which ought to offer some defense against the in-your-face yet whimsical charms of Winona Jordan (Sarah Hay), who lives in the same building and uses this flimsy pretext to try to talk him into giving her a ride to Canada – yet try as he might, he just can’t persuade her to give up. As it turns out, he has his own reasons to head in that direction anyway, so he reluctantly agrees, whereupon she makes it her mission to provoke him into loosening up and having some fun enroute. The film is, in some ways, a COVID era film both in its topicality and its making. Peter is usually seen wearing his COVID mask, which in some ways, is an extension of his own social distance from others.

In a café along the way, Peter tells Winona: “Sometimes, I feel like I know everything, and I am not a part of anything.” When she tries to get Peter to talk about himself, he finally blurts out: “Who and what I am:  I am a circle inside a circle inside a circle. I am a college-educated homosexual dwarf in a world with little to no patience for intelligence, for men who fuck other men, or for bodies of specific make and model. I am unemployed, balding, prone to illness, statistically I am going to die sooner or later, and I am so goddamn smart.” In response, Winona tells Peter: “I used to have a lot of self-pity,” adding later: “I am a human being that does sex work.”

Winona’s reason for traveling is an unusual one. She was, she says, abducted by aliens many years ago, and now they have contacted her again and told her to meet them so that they can take her away for good. Peter is not convinced, assuming that she’s delusional, but gradually comes to realize how important it is to her emotionally to see this through. Whilst much of this engagement is played for laughs, Winona is not treated unsympathetically and her role is played brilliantly by Susan Hays. There are hints that she might have been institutionalized, or in an abusive situation, until very recently. In one scene where she becomes convinced that somebody is coming for her, she reveals real terror, throwing everything else into sharp relief.

Peter’s journey is lower key and more nuanced. Rather than obliging him to open up completely and revise all his ideas about life, the film acknowledges that he has reason to be guarded – what’s important for him is processing his grief and recovering his ability to invest in the close friendships which shore up his world. As Winona seeks to escape the world, either physically or mentally, he grapples with the task of carving out a space within it and regaining confidence in his own worth. Little people have been used to create a sense of quirkiness in any number of films (and television series), but here director Juan Felipe Zuleta flips that around. It’s Peter whose gaze informs the film, and part of the way he reduces the emotional burden created by other people’s prejudice is by acknowledging the absurdity of it, seeing people’s assumptions about him as the things that are odd and, sometimes, amusing.

What exactly is their destination on this road trip? Winona is convinced that she needs to to a specific place in the wilderness of rural Canada which she believes to be the site of an upcoming alien visitation. On their increasingly-surreal odyssey, Peter and Winona encounter bickering lesbian cosplayers, shroom-addled survivalists, and even extraterrestrial highway cops. But the further they go and the more their trauma comes to light, it becomes clear that the only thing more nerve-wracking than being abducted is being alone in the universe.  Throughout the crazy road trip, Peter is always reading from his copy of Chekhov’s stories and, in some fact, the Chekhovian theme of unfulfilled desires and life’s disappointment shares much with the story behind Unidentified Objects. In Peter’s words: “I am so sorry that the universe doesn’t work like you want it to, but, Winona, we get put in our bodies in this place and we live and we die and we decompose here. This world, this fucking frame, the world – we do not fit. We do not have a place because we are mistakes.”

Directed by NYC-based Colombian filmmaker & commercial director Juan Felipe Zuleta and written masterfully by Leland Frankel (longtime creative collaborators), Unidentified Objects marks their feature film debut, and is also an important milestone in the history of complex cinematic representation for Little People (LP). Sarah Hay was nominated for a Golden Globe for her first ever acting performance as the lead as Starz in Flesh and Bone. She was also nominated for a Critics Choice Award and won Best Actress Satellite Award. Her more serious acting career started in 2016 when she was in Darren Aronofsky’s Black Swan.