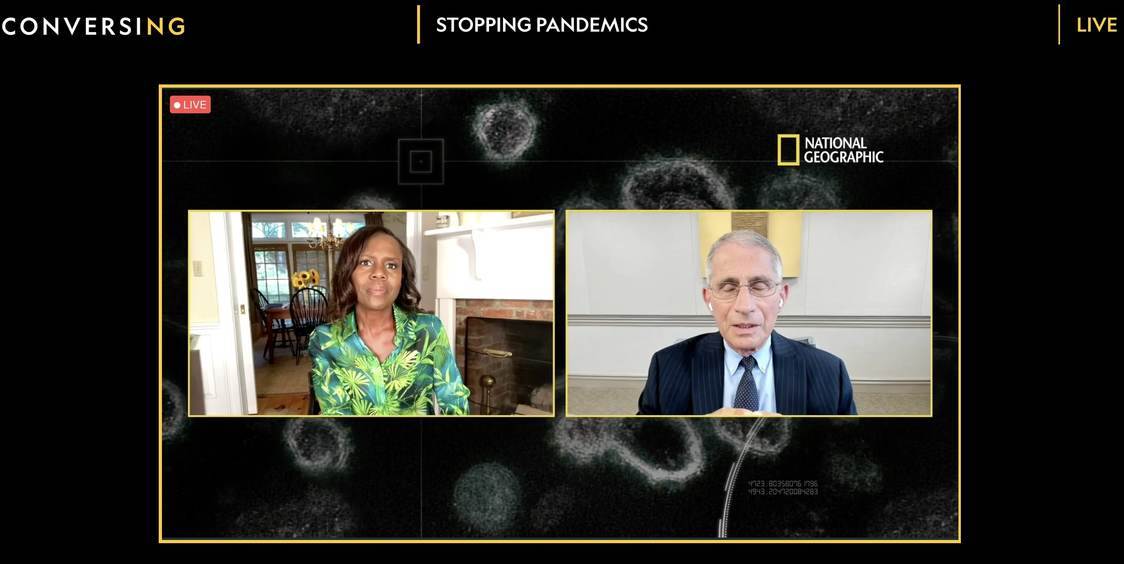 Los Angeles, CA (The Hollywood Times) 8/13/20 – On Thursday 8/13/20 afternoon National Geographic streamed a live panel discussion on the Covid-19 crisis. Of course, the main attraction was a live Q&A with Dr. Anthony Fauci, The White House infectious disease expert for over four decades. In a national maelstrom of fear, misinformation and political malpractice, he remains a comforting presence; dispensing facts, figures and sage advice with a splash of diplomacy.

Fauci has been effectively muzzled by the Trump administration from speaking to major media outlets. However, Fauci has done what he can by carrying his message to alternate platforms, podcasts, and now National Geographic’s live stream event; and reading between Fauci’s carefully calibrated statements, he ain’t happy.

Predictably no silver bullets were revealed, and Fauci reasserted that our best offense is still a good defense. Masks, distance, hygiene, testing and responsible public policy regarding re-opening. Uh…yes, a word about all that.

He remains skeptical of Russia’s vaccine absent stage three testing protocols. He realistically appraised any vaccine as a 55 to 75 percent solution that will be a useful tool in overcoming the virus, but hardly a panacea. Fauci assured us that the CDC and NIH is already working on a prioritization strategy for any immerging vaccine. He is clearly frustrated by the patchwork strategy of mitigation that is still guided by geography and political affiliation. Fauci further pointed out that our percentage of positive test results against number of tests is a recipe for more surges, and our cocktail mix of guidelines across state and county borders is not likely to be effective. Fauci also pointed to the American spirit of independence (expressed by a refusal to wear masks) as a crucial factor in community spread; and further suggested that a little coordinated leadership between Federal and local government might help.

Fauci came as close as he is likely to come in calling out the Trump administration for its ineptitude, indifference and avarice. Fauci stated that the national atmosphere of divisiveness must end. Gee…wonder what he meant by that?

Fauci went further and candidly stated the threats he and his family have endured is far worse than the homophobic backlash he experienced in the 1980’s during his work on the HIV-Aids crisis. He seemed dumbfounded that he and other public servants (whose only concern is saving lives) can be the objects of so much hatred.

After Dr. Fauci, Nat Geo spoke to a panel of four commentators that included medical professionals, historians and civic leaders.

Dr. Jennifer Ashton delivered some sobering truths, confirming that Russia has not even bothered to conduct stage 3 testing before distribution of their vaccine. Moreover, to date, the current world record for vaccine testing and efficacy is four years. She also noted that a quarter of all teachers have pre-existing conditions and are vulnerable to Covid-19. Additionally, the ripple effect of a system underwater from Covid-19 could adversely impact patients with conditions totally unrelated to Covid-19.

Author- Richard Conniff updated viewers on the brief history of the vaccine that started post WWII. Vaccines eliminated the scourge of Polio and was a fairly routine and uncontroversial aspect of our medical health care system until present day. Conniff bemoaned our short memory regarding consequences of an unvaccinated world and how our complacency has allowed public health services to deteriorate in America. Conniff stressed the importance of an International policy on pandemics – not just national policy. Conniff gave us historical perspective, citing the successful international response to H1N1 as an example of how it can (and should) be done.

Nsikan Akpan, National Geographic’s science editor suggested that a viable vaccine should be seen as a tool to achieve herd immunity if the vaccine could achieve a 60 to 70 percent success rate. But stressed that a vaccine should not obviate other practices to break the chain of transmission, such as masks and distancing.

DC Mayor Muriel Bowser pointed out the disparities in the access to quality of healthcare by race and reminded us that it’s not too late to institute a Federal plan for Covid-19 testing and mitigation. Seventy percent of the fatalities from Covid in the DC area are African American.

We now live in a world where taking an evening walk is a potentially life-threatening activity. Our cathedrals of Sport sit empty and the bonds of family have been stretched and strained. 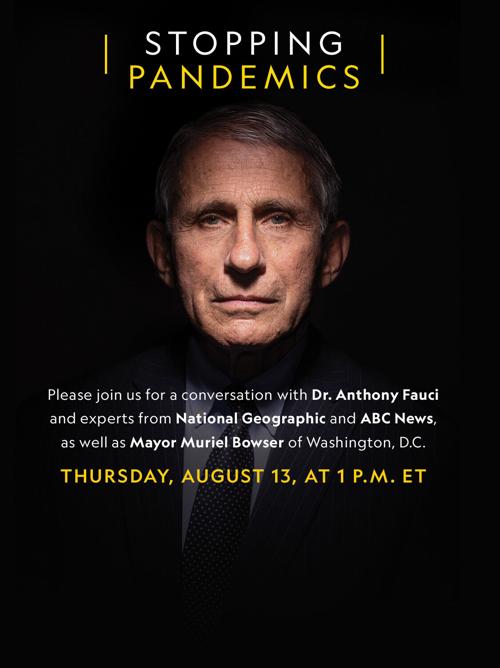 As of 8/13/20 we have over 5 million infected people in this country. 167,000 plus now dead with the year-end projections constantly being adjusted upward as leaders and citizenry continue to stumble in a minefield of ignorance, chaos and conspiracy theories.

Hey Dr. Fauci, while you’re at it, can you maybe come with a vaccine for stupidity?