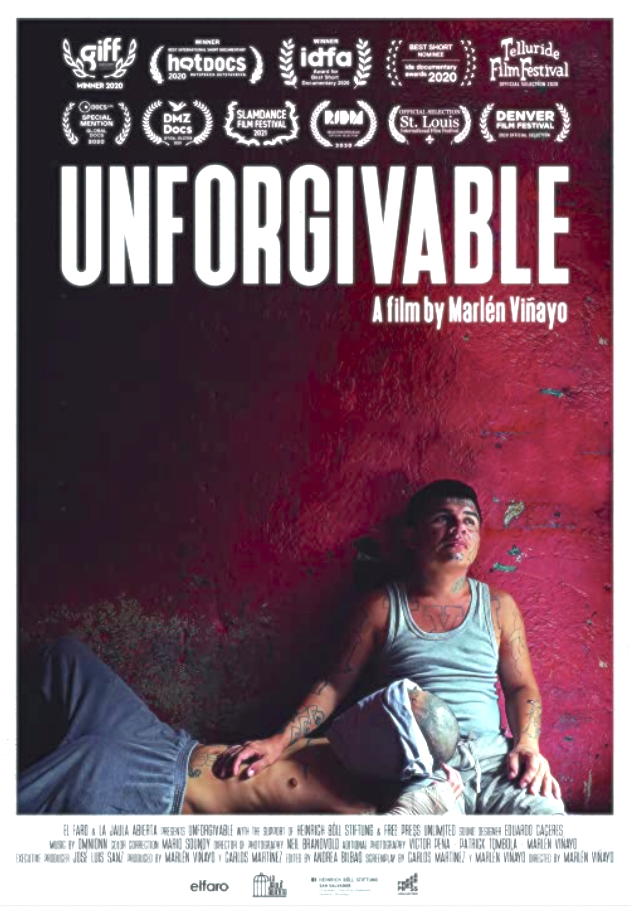 Los Angeles, CA (The Hollywood Times) 2/13/22 – Unforgivable, which premiered worldwide via Video on Demand from Feb. 5 to Feb. 8, is a fascinating and disturbing look at what it’s like to be gay and a former gang members in a Salvadorean prison. A ruthless hitman for the 18th Street gang deals with his sexuality inside an evangelical Salvadoran prison, where he is not just guilty of crimes, but of an unforgivable sin under God and gang: being gay. In this particular prison in El Salvador, San Francisco Gotera, in the east of the Central American country, gang culture was not the only source of virulent homophobia. Starting in 2015, evangelical pastors had converted almost all of the prisoners there to Christianity, and convinced them to leave their gangs. The state had effectively ceded control of daily life inside Gotera to church leaders, who preach that homosexuality is a sin as grave as violence. The 35-minute short film was awarded Best of Fest at the Palm Springs International ShortFest 2021 and Grand Jury Prize for Best Documentary at Slamdance Film Festival 2021.

In April 2019, Carlos Martinez was visiting a prison for gang members in El Salvador, having gained rare access to help with a photography project. A reporter for national newspaper El Faro, Martinez, 41, was used to dealing with the gangs that have over decades made his country one of the most violent in the world. But this time he saw something that shocked him. The prison director showed him an isolation cell, where nine former gang members – from each of the country’s three main organized crime groups, MS-13, and two factions of Barrio 18 – had been moved after coming out as gay. “It was completely unheard of,” Martinez says. “Because in the gangs, if there’s even the suspicion that you’re gay, you pay for it with your life.”

As soon as Martinez left the prison and got in his car, he called Marlén Viñayo, 33, a Spanish director living in El Salvador, to tell her what he’d seen. The short documentary they produced, Unforgivable follows Geovany, a gay man who worked as a hitman for Barrio 18 and left the gang in 2016. Living in the isolation cell with his partner and other gay inmates, he grapples with both his sexuality and his violent past. “I think killing a person, yes it’s bad but it’s not that difficult,” he says at one point. “But loving another man, that’s not natural.”

The film’s nuanced portrayal of the former gang members’ experience won it international praise and prizes at a string of major film festivals in 2020, making it the first Salvadoran film to be eligible for an Oscar. But it is likely to be controversial at home. Evangelical churches are a growing influence in El Salvador, far outstripping the state and just pipping the Catholic Church to become the country’s most trusted institution in 2016, according to public research institute IUDOP. Homosexuality remains taboo and violence and discrimination against LGBTQ people is rife. And sympathy for gang members is a tough sell. Though gang violence and murder rates have plummeted over the past two years – which many suspect is the result of a secret pact between the gangs and President Navib Bukele – there are an estimated 60,000 gang members in a country of 7 million, and they have killed tens of thousands over the past decade. This week police arrested three gang members for an armed attack on a Doctors Without Borders ambulance.

Martinez, though, says Unforgivable isn’t a film “about gangs,” or an attempt to redeem their members, but an examination of the culture that allowed Geovany to arrive at his twisted moral conclusion. “We want to create a reflection – from this extreme place of the prison isolation cell – of the kind of society we have built,” he says. “How is it possible for a country to have its moral compass so broken that homosexuality and murder can feel the same?”

Viñayo and Martinez were granted twelve days to film inside the prison in May 2019. Conditions in the cell, where overcrowding means nine prisoners live 24 hours a day in just a space of one by two meters, made for a difficult shoot.

But four inmates agreed to participate and began to speak about their lives with surprising candor, according to Viñayo. She says she kept reminding them the film would be shown in El Salvador and available online, and asking if it would put them at risk. “But the truth is that they are already condemned: they’ve left the gang; they’ve lived with former members of other gangs; and they’ve lived openly as gay people,” she says. “If they ever got out of prison, they’d have nowhere to go. One of them said the only solution would be to live in the sewer.”

Evangelical churches offer a rare way out of gang life in El Salvador. For several decades, evangelical Christianity – practiced by around 16% of the country in the 1980s –has been spreading rapidly, displacing Catholicism. Annual surveys by national newspaper La Prensa Grafica have found the proportion of Salvadorans identifying as evangelical grew from 28.7% in 2004 to 39.5% in 2019, while the percentage identifying as Catholic fell from 55.1% to 40.5% over the same period. Analysts say gangs appear to respect evangelical churches because of their emphasis on personal transformation and forgiveness of past crimes, with more than half of gang members identifying as evangelicals compared to 17% as Catholics. According to Martinez, if a gang member asks to leave to live a more religious life, gang leaders will often let them – though they will watch out for “bad behavior,” including smoking and cursing, which can undermine the former member’s claim to be religious and result in punishment, he adds. 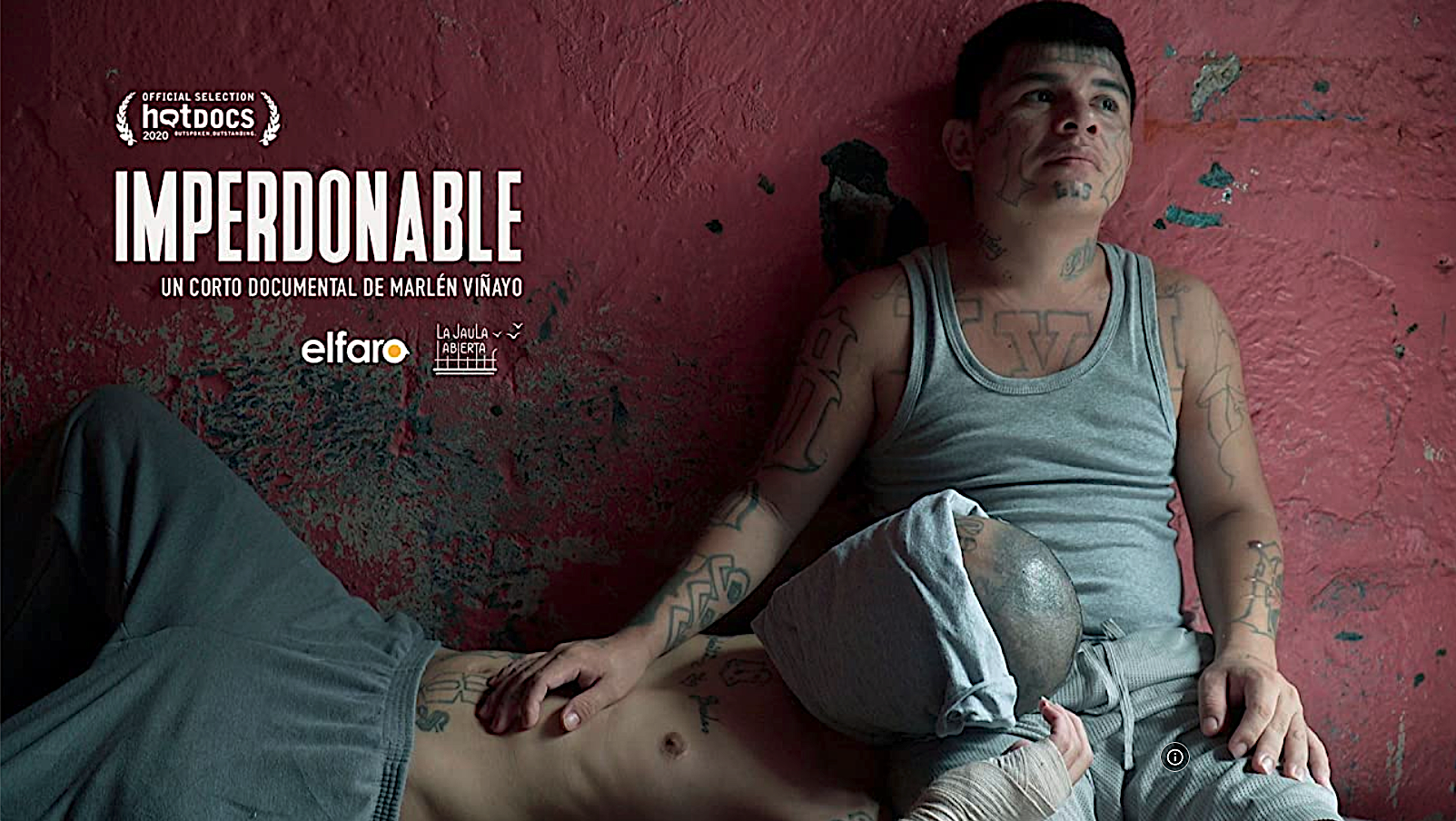 In Gotera, the evangelical churches’ growing role in daily life sharply reduced violence, and enabled members of different gangs to live peacefully together – a rare phenomenon. But church leaders also preach some troubling messages. “God knows that the gang member went astray, committing endless atrocities […] because he was like a beast, an animal. The homosexual is the same,” says a pastor in one interview laid over a scene of him preaching to rapturous crowds in the prison courtyard. “In God’s eyes, no sin is bigger than another. Sin is sin.”

Much of the narrative revolves around Geovany’s attempt to be transferred out of Gotera because of the church’s dominance, and his fear of being separated from his partner, Steven, who is more religious and even more conflicted about his sexuality. (Soon after filming ended and a new government took over in July 2019, a reshuffle of the penal system led to the closure of San Francisco Gotera and all the prisoners were transferred to other prisons. Viñayo and Martinez have not been able to contact Geovany or their other subjects since, but they believe he and Steven were likely split up.)

Martinez says the film is not an attempt to redeem the subjects “just because they’re gay, just because they can show love or tenderness.” Scenes of the couple worrying about the future, quietly embracing, or laughing with friends over a magazine, are juxtaposed with brutal descriptions of the crimes Geovany committed while in the gang – including murder and rape – both from him and officials. “The important thing was to complicate characters in a country where the predominant narrative is of good and bad; perfectly good and perfectly bad people.”

Viñayo says the team continued a “constant debate” about balancing different aspects of their subjects in producing and editing the documentary. If it makes for uneasy watching, that’s because it reflects the experience of having met these people, landed in this unusual position, she says. “We kept asking ourselves, what do we feel for them? We never managed to reach a conclusion.”