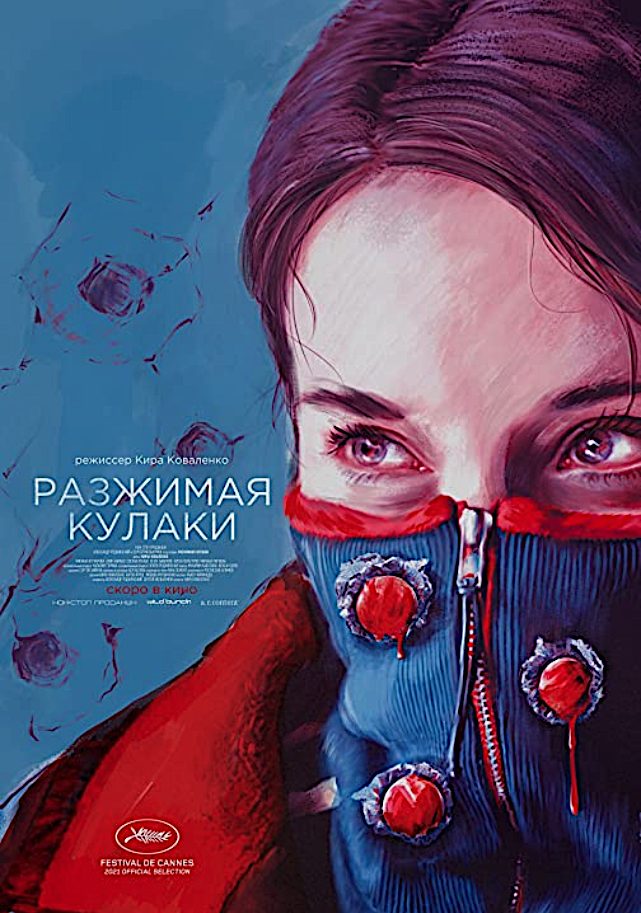 Los Angeles, CA (The Hollywood Times) 11/14/21 – On Friday, October 12 at the AFI Film Festival in Hollywood was a screening of Kira Kovalenko’s Unclenching the Fists (Russia, 2021), a tense and disturbing film about a dysfunctional Ossetian family living in a mining town in North Ossetia in the Caucasus region of southern Russia.  It is a heartbreaking film about a family being torn apart and director Kovalenko has created a film so strong that Russia decided to make it the official submission for the Best International Feature Film at the 2022 Oscars. Kovalenko based this on a real incident when Chechen separatists held hostages to demand recognition from Russia for their country’s autonomy. It ended with Russian tanks storming the sites and the ensuing fight killed 331 people and injured hundreds more. Ada is supposed to have been in those attacks and her body is still marked by the event from the plentiful visible wounds to the fact that she wears a diaper because she can’t control her bladder. This obviously codes her as suspended in her own childhood. Her terror of her father, her love for her older brother Akim and her loveless relationship with her boyfriend place her in a mid-air freewill, that way adulthood, this way regression to the safety net of childhood.

Ada (Milana Aguzarova) is the middle child of a lonely widower (Alik Karaev), and she wants out. Out of her family, out of her hometown, out of her cramped house, out of her unbearable life. Every day, she sits by the road out of town waiting for the return of her elder brother Akim (Soslan Khugaev). Her younger brother Dakko (Khetag Bibilov) has cognitive challenges: He is old enough to drive but emotionally a child in his mind that he insists on sleeping next to Ada as if she were his mother or a stuffed animal. Her boyfriend (Arsen Khetagurov) wants to take her virginity, but she’s embarrassed to be seen out of the house with anyone because her father also has a jealous fixation on her. He won’t let her leave the house most days and needs to know where she is all the time. Ada herself has unusual fixations too, and, when Akim returns home, there’s a sense of something deeper than sibling longing in their endless embraces.

In Unclenching the Fists, men are horrible – and beyond pathetic. Misery seems to be the inevitable destiny for Ada and just about everyone in this gloomy part of Russia in the Caucasus region of North Ossetia near the Republic of Georgia. Unclenching The Fists is steeped in its references to similarly incest-minded Fists in the Pocket (1965) by the Italian neorealist director Marco Bellocchio. The final camcorder shot final image of two people on a motorcycle seems to echo the spirit and technique of the Iranian master filmmaker Kiarostami. As Kira Kovalenko’s explained in the Zoom Q&A after the screening, Uncleaning the Fists is the first film to be spoken in Ossetian, an Iranian dialect native to one sliver of the shadow of the Caucasus mountains. Also impressive are the performances of the actors that Kovalenko has in the film. All non-professionals, they are local Ossetian people from the actual mining town that she selected based on her observations of the community and its inhabitants.

The cinematography seems reminiscent of some films of Béla Tarr, such as the saturated colors that at times capture Ada’s state of mind, evoking the grainy blue hues of Tarr’s Almanac of the Fall (1984). The final scene of Ada riding on the back of a motorcycle, barely holding onto her bag by its strap, recalls the indelible image that closes The Prefab People, of Judit Pogány’s dejected wife riding on the back of a truck holding onto her mini washer. In both Tarr’s and Kovalenko’s films, a cherished object is symbolic of the desire to catapult away from so much agony. There is another significant influence on Unclenching of Fists and that is the work of Kovalensko’s mentor Aleksandr Sokurov who, in turn, was highly influenced by his fellow filmmaker from the Soviet era, Andrei Tarkovsky.

In Unclenching the Fists, the possibility of Ada’s escape rests, figuratively and literally, on the shoulders of her older brother, Akim (Soslan Khugaev), who’s managed to leave the household and find work in Rostov. When he returns to Mizur for a visit, she effectively smells freedom off his jacket. One of the film’s most indelible touches is how Ada forges an intimate relationship with her world through scent, as she’s constantly sniffing the traces of things as though they were secret paths, or exits, from Akim’s clothing to his neck, which smells of their father’s touch. She also smells, with the anxiety of certain criminals, her fingertips for the remnants of the makeup that her father makes her throw away in the sink.

Though violence haunts the film, Kovalenko refreshingly avoids letting it inhabit the center of the frame. Violence is glimpsed only in the shape of aftereffects, such as when Ada and Tamik compare scars (“I was blown up once,” she tells him), or from afar, from neighborhood kids playing with explosives as though they were tennis balls to a physical altercation involving Ada, Akim, and their father. Unclenching the Fists is a tale of how the desolation of a nation inhabits and engraves a woman’s body, but most exceptionally, the film is built on the disorienting contradictions that make up family relations. That is, the imbrication of aggression with affection, the strange craving to both kill, sometimes literally, and care for one’s tyrannical father.

This may be a tough film to watch, as we experience the psychological and emotional effect of being locked inside the very house that Ada wishes to flee. The members of this dysfunctional family uncomfortably embrace out of desperate needs, their fists so unwilling to let go. Ada carries the real and figurative scars from a terrorist action from her youth and we sense her smell of predetermined exile in this forbidding mountain town in the Caucasus. Is it possible that the fists of male dominance can ever be unclenched in a place like this?