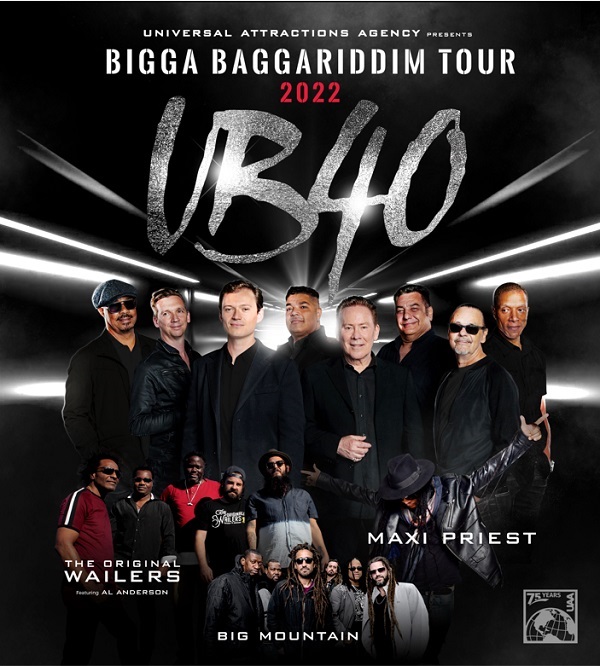 FOUR-TIME GRAMMY® NOMINATED LEGENDARY REGGAE-POP BAND TO PERFORM ICONIC HITS “RED RED WINE,” “FOOD FOR THOUGHT,” “(I CAN’T HELP) FALLING IN LOVE WITH YOU,” AND MUCH MORE, FOR FANS NATIONWIDE

Los Angeles, CA (April 11, 2022)—UB40, legendary reggae-pop band and four-time Grammy® nominees, will hit the road this summer in the U.S. for their BIGGA BAGGARIDDIM TOUR with The Original Wailers featuring Al Anderson, Maxi Priest and Big Mountain, kicking off on August 19 in Detroit, Michigan.  The band will perform its worldwide hit singles “Red Red Wine,” “Food For Thought,” “(I Can’t Help) Falling In Love With You,” and many more, in addition to songs from their most recent album, BIGGA BAGGARIDDIM.

With additional dates being added, the tour will include stops at The Hollywood Bowl in Los Angeles and Central Park in New York City; in addition to Detroit, Pittsburgh, Boston, Washington, DC, St. Petersburg, Houston, Ft. Worth, Austin, Phoenix, and many more.  Tickets are available at UB40.GLOBAL and VIP packages are available at: www.237global.com.

Says Robin Campbell, “We’re so excited to finally be going back to America, after the hiatus caused by the pandemic. We can’t wait to feel the vibe and love of a live crowd in the states, and for all the UB40 fans to meet our new vocalist Matt as well. They can expect a phenomenal show. We’ll be sure to bring the party.”

Adds Jeff Epstein of Universal Attractions Agency, “We’re really excited about this tour, and we can tell the fans are too. UB40 are legends, and it’s our honor to present them in celebration of their new album. These shows promise to be a one-of-a-kind experience this summer with four reggae greats all on one stage. We’re so grateful everyone hung in there through the uncertainty of the pandemic shut-down to see this through.”

UB40’s new lead singer, Matt Doyle, joined the band as lead vocalist in 2021, taking over for a retired Duncan Campbell.  The band asked Doyle to come onboard after his group, KIOKO, opened for them at The Royal Albert Hall in 2018 (and then supported UB40 on their subsequent UK tour and European tours).  Doyle’s lead vocals are also featured on the track “You Don’t Call Anymore” from BIGGA BAGGARIDDIM, recently released last year.

Says Doyle, “I really love UB40’s fans, they’ve welcomed me with love and open arms and I can’t wait to meet the fans across the pond, even more I can’t wait to hear them all singing the classics back to me.”  He adds, “It’s crazy to think of how my dream of touring the U.S has become a reality, joining the biggest selling reggae band in the world, a band that broke in America back in the 80’s, and who are still adored globally today.”

UB40 will also be releasing a new song for an all-star album of Birmingham artists from an array of genres spanning Afrobeat, neo-soul, trip-hop, Asian electronica, folk, garage rock, jazz, reggage, R&B, Hip Hop and UK rap, that will be released in June to celebrate the 2022 Commonwealth Games.  Details are to be announced.

Originating as group of young friends from Birmingham with working-class origins to creating the world’s most successful reggae band, UB40 has gone on to becoming four-time Grammy® nominees for “Best Reggae Album,” selling millions of records, and spending a combined 11 plus years on the UK album charts with more than 50 UK hit singles including “(I Can’t Help) Falling In Love With You,” “Red Red Wine,” “I Got You Babe (Ft. Chrissie Hynde),” and many more. UB40 is one of the most successful British groups of all time.  For more information visit:  https://ub40.global/.

In 1974 when Bob Marley went solo, he surprised the music community by choosing as his lead guitarist the American-born Al Anderson. It was Anderson’s stunning lead work on such classics as “No Woman,” “No Cry” and “Three O’Clock Roadblock” that first alerted rock fans to The Wailers music. Anderson’s musical achievements with Bob Marley & The Wailers include the 10X Platinum album, LEGEND. The Original Wailers received their own Grammy® Nomination in 2013 for their album MIRACLE, making it Anderson’s second Grammy® nomination.  Al Anderson is the sole member of the Bob Marley & The Wailers’ mid-1970s line-up in The Original Wailers.

Superstar Maxi Priest is the first reggae artist to have a No. 1 hit worldwide, including the U.S. Billboard charts. Maxi’s 2019 album, IT ALL COMES BACK TO LOVE, released on S-Curve Records/BMG and co-produced by Shaggy, was nominated for the Grammy® award for “Best Reggae Album.” He followed that up with 2020’s UNITED STATE OF MIND, a collaborative album with Robin Trower and Livingstone Brown.

Big Mountain has sold more than 40 million copies of their hit singles “Baby I Love Your Way,” “Touch My Light,” “Caribbean Blue” and “Let’s Get Together.” For the past 36 consecutive months, Big Mountain’s “Baby I Love Your Way,” 25 years after its commercial release, maintains more than 10 million monthly streams, making it one of the biggest, most well-known songs in the history of music.  On the tour, the group will perform songs from their forthcoming album titled FREEDOM, and the new BEST OF BIG MOUNTAIN 2000-2020. 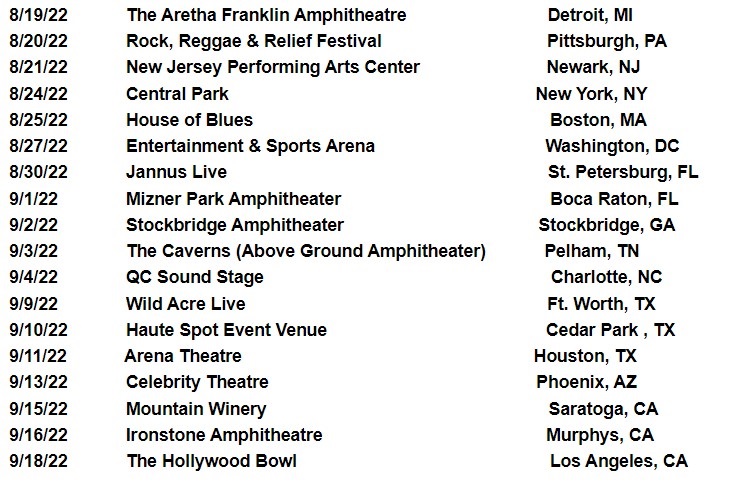