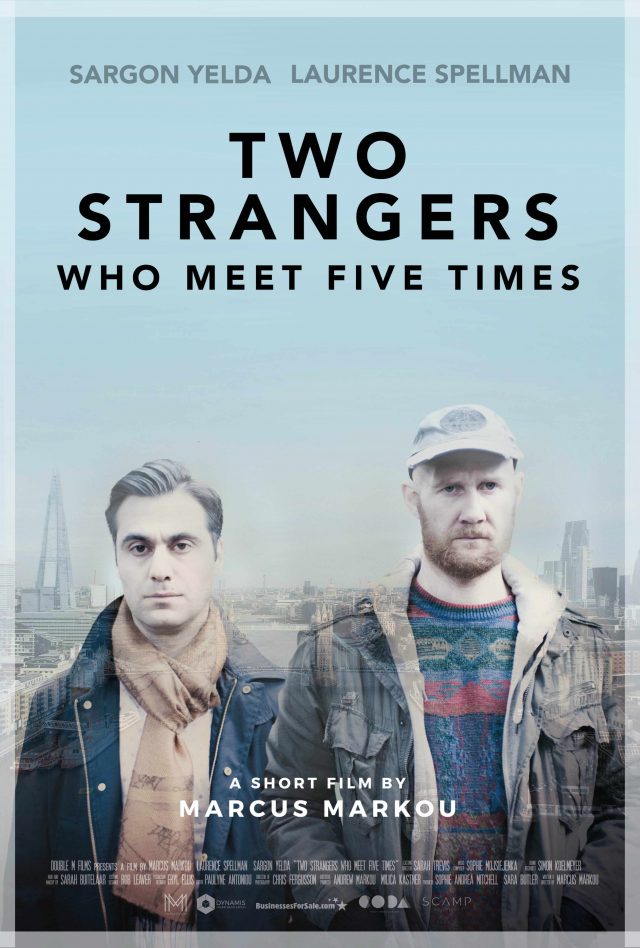 Alistair and Samir meet five different times and champions friendship and compassion over separation and distrust.

This film moved me as it started to the very end. It captured who we are as a society, as humans, as people that live by what we are told and how we are guided by our parents and ancestors.

From the beginning, you see a story, that starts at the second meeting with Alistair and Sammi!  You are taken by the way Alistair treats Sammi.  They’re at a Cashpoint (ATM) and Alistair is impatient, seemingly in a hurry and isn’t happy that Sammi is taking a wee bit longer.  Comments are made that deeply concerns, Sammi. Comments that go behind a simple, “I’m in a bit of hurry, would you be so kind as to move on?” 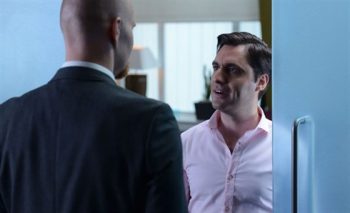 Perhaps the Cashpoint was not functioning properly, perhaps, Sammi was taken by what he saw on the screen, something may have disturbed him. Whatever it was, Alistair didn’t like and lashed out with slurs against a man he never met before, or so he believed. 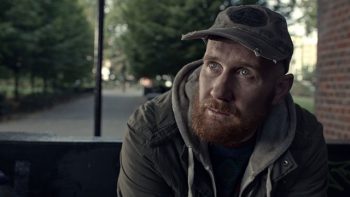 Alistair’s down and out, homeless and it’s a few years later. He’s begging for money when a casually dressed man walks by. Alistair calls him out by name. “Sammi,” he says. “Remember me? You turned me down for a job.” Now it’s Sammi’s turn to deny ever meeting Alistair. But Sammi does something incredible. He gives Sammi money from a Cashpoint to tie him over.  Alistair’s tears run, as the pain leaves him. The pain of all those years, the embracement of hate, the sorrow and his remorse for his past.  This moved me the most.

This is the most incredible part of the story.  It’s years later and the two finally meet, again. They are older, one is losing his mind as the other is a volunteer. The facial expression on the one, says everything to the other.  You must watch this film.

This tells the story of the life of both people. This explains how it all begins, where it all started and how it continues. This writer cried out; This was “ME”! I was Alistair! I’m going to do something that will move you, change you and hopefully take you down the path of changing your “story.”  DO NOT let this become you. Your story is NOT set in stone.

Let me share with you why this film is so moving, a must-see and how it affected me deeply on a personal level.  But, I want to emphasize that my sharing is only that, sharing and not making this review about me but why I feel so compelled to share my “story” because if it changes just one person as this film did for me, then I have succeeded in doing my job as a writer.

Over the past two years, I had fallen onto hard times.  On public assistance, not working, taking countless interviews and blaming a “specific” culture for my misgivings. It was THEIR fault, I stated! I’m the VICTIM, I claimed! They are the ones who need to be out of work, NOT ME! This is MY COUNTRY, not theirs!  And I went on. This film showed in my life, in my voice, in my rage and in my disdain for “them.” How righteous I believed I was. How much I believed that I was OWED!  Oh, boy was I wrong.

I was nearly like Alistair but with two kids and a wife, 3 dogs, and 2 cats. 5 months late with rent, nearly losing my cars and the like.  What’s my point? HATE! That’s my point!  Let me tell you when it all changed.  When I stopped and looked back at the man in the mirror and started accepting responsibility for my actions because NO ONE does anything to us that we don’t give them permission for. Hence, me being rejected and rejected and rejected. Then, one day, this past April, an email came from a person with a company that wanted to interview me. I was afraid of coding tests, being rejected again, and starting over.  She didn’t code test me and passed me the second round. I shared my code, and the next interviewer saw what I could do, and they rushed me to the third and final round.

On April 18th, 2018, the man that spoke to me next asked me what my salary requirements were, after a 45 min grand conversation. He said that if he paid me what I wanted, it’d take weeks to get authorization or if I accepted what he offered, I could start immediately. Suffice it to say, I took the offer and started immediately. Now, I’ve bought a new car, with a 497-credit scored which rose 61 pts in 3 mos., have a 401k, savings for me and my wife, my kids and a new-found joy for life.  My hate has abated, and I can safely state that what was once a raging inferno is now a flicker. Oh, and by the way, the very CEO that I’m working for is a person of the race of people “I CHOSE TO HATE and BLAME” in the past. My oh my how fate has a funny way of teaching us lessons.

What’s the point here? I’m the newborn Alistair with a new look on life and that can and will happen to you. What was a story told to by your parents to live because of their beliefs, or the beliefs you have “created” that are unfounded, MUST be changed or you will surely fail!  STOP the madness and change the “stinkin’ thinkin’!”  STOP what you believe is right and STOP finding someone to blame. Start looking at the person in the mirror like the late Michael Jackson sang about. It is so very true.

You know, I need to tell you that on Friday, a person was let go and we were told as a team. I felt for that man because I WAS that man. He is of the same race of people that I blamed. He’s a professional and like him. I want to help him. He’s got 4 kids and now I feel for him. I need to find a way to tell him, it’s ok and I’m here for him and his family.  What changed in me? Well, I’m not religious, or practicing anything but, like the Apostle, Paul suffered for years, I too have suffered, and it wasn’t until “I CHANGED” that my life changed with it.

When you watch this film consider yourself, your actions and who they affect. Think about who you met and ask, “Have I met you before? You look familiar.” Think long and hard at the next thing you do or say to anyone for it shall have consequences. Turn that negative thought into a positive moment in your story, in your chapter in the book of Humanity. Make your story one of inspiration, joy, and love.

If I can leave you with one thought, think about you and your family before your open your mouth. We were given two ears and one mouth, so we can listen twice as much as we speak. DO NOT speak wrongly about anyone, do not assume anything for it shall be your undoing.

WATCH THIS FILM and think about who you’ve met and if you can change the story of your life for it is never set in stone.