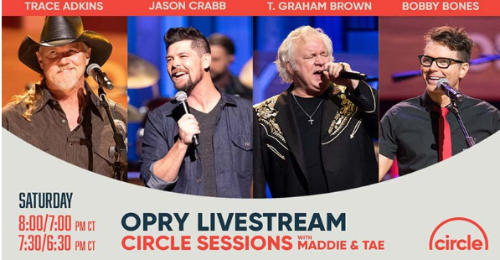 Opry Easter Celebration to Re-air on Circle on Easter Sunday

“I’m so happy that the Grand Ole Opry tradition of weekly live broadcasts is able to continue bringing the music and fun to it’s loyal audience,” said T. Graham. “I’m always honored to sing in the “Sacred Circle,” especially during these times of uncertainty. Music heals the soul and that’s what we are all trying to do in one way or another.”

In addition, the Grand Ole Opry has partnered with MusiCares to bring you the #UNBROKEN campaign to raise money for MusiCares’s COVID-19 Relief Fund, benefiting artists and music professionals affected by the crisis. You can help us keep the music playing and the circle unbroken by texting UNBROKEN to 41444 to donate now, and by tuning in this Saturday, April 11 at 8PM ET / 7PM CT on Circle.

The Opry will be broadcast live Saturday, April 11 at 8 PM ET / 7 PM CT on Circle, and on Gray TV stations, DISH Studio Channel 102, Sling TV and other TV affiliates in addition to a companion live stream on Circle All Access Facebook and YouTube channels. TV and radio personality Bobby Bones will host the Circle telecast, while Opry announcer Charlie Mattos will join the Opry’s radio audience at the announcer podium. Embracing today’s technology, the Opry will be broadcast and streamed with a very small production team. The show’s artists will perform acoustically at a recommended social distance across the Opry stage.

Fans around the world can also tune in to the broadcast on the Opry’s flagship radio home, 650 AM-WSM and several other outlets.

With Nashvillians at home under Nashville Mayor John Cooper’s “Safer at Home” order and live shows paused at the Grand Ole Opry to help reduce the spread of COVID-19, this Saturday’s performance will once again take place without a live audience. Grand Ole Opry management has worked closely with Nashville’s Director of Health to bring the show live to millions around the world while following strict safety protocols under the guidance of local health professionals.

Since the Saturday night Opry telecast will be an Easter celebration, the one-hour show will be re-broadcast on Circle Television on Easter Sunday 10 ET/ 9 CT and 6:30 PM/ 5:30 ET. 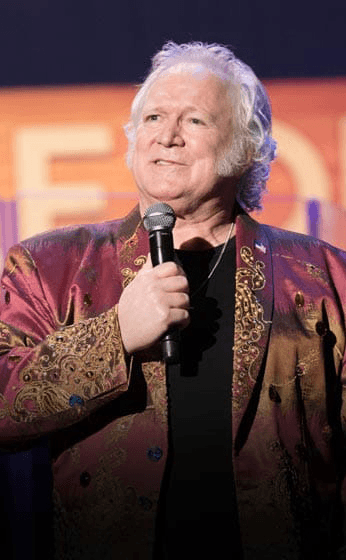 Graham Brown has recorded 15 studio albums and charted more than 20 singles on the Billboard charts. He has had multiple number one hits in country, gospel and blues. Brown’s voice is also recognized from his singing in advertising campaigns for McDonald’s, Disneyland, Almond Joy, Coca Cola, Dodge Truck, Ford, Hardee’s and many others including the Taco Bell “Run For The Border” television spots.

In early 2015, Brown released his latest Grammy nominated album, Forever Changed, which featured collaborations with Vince Gill, Jason Crabb, The Oak Ridge Boys, Jimmy Fortune and more. T. Graham Brown still actively tours throughout the year, including multiple appearances on the legendary Grand Ole Opry and television appearances such as Larry’s Country Diner and Country’s Family Reunion. Brown’s uniqueness has made him one of the most beloved and iconic performers of the day.

About the Grand Ole Opry:

The Grand Ole Opry® is presented by Humana®. Opry performances are held every Friday and Saturday of the year, with Tuesday night shows February 4 through December, plus seasonal Wednesday shows and Thursday Opry Country Classics performances. To plan an Opry visit, call (800) SEE-OPRY or visit opry.com. The Opry presents the best in country music live every week from Nashville, Tenn. Celebrating nine decades of entertainment, the Opry can be heard at opry.com and wsmonline.com, Opry and WSM mobile apps, SiriusXM Satellite Radio, and its flagship home, 650 AM-WSM. The Grand Ole Opry is owned by Ryman Hospitality Properties (NYSE: RHP). For more information, visit opry.com.

For more details and to find out if Circle is available in your market, please visit www.CirclePlus.com. For more information about Circle, please contact info@circleplus.com.