U.S. President Donald Trump launched a weeklong trip to Europe on Tuesday with harsh criticism for NATO allies.  Trump will later head to London, where Prime Minister Theresa May’s government is in turmoil over her plans for exiting the European Union.  He predicted that the “easiest” leg of his journey would be his meeting with Russian President Vladimir Putin at the end of the trip. 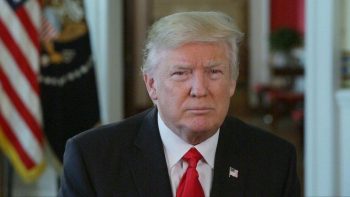 “Getting ready to leave for Europe.  First meeting — NATO.  The U.S. is spending many times more than any other country in order to protect them,” Trump tweeted on Tuesday morning, adding: “Not fair to the U.S. taxpayer.”

President Trump, who has compared the sentiment that underpinned the Brexit vote to leave the EU to his own election, will be making his maiden presidential trip to Britain at a fraught time for Prime Minister May.  Foreign Secretary Boris Johnson and Brexit Secretary David Davis resigned within hours of each other in protest of May’s plan.  Trump’s visit is expected to attract large protests in London and elsewhere in Britain.

Trump’s weeklong trip to Europe will continue with a stop in Scotland before ending with a sit-down in Helsinki with Putin.  He said that of all the high-stakes meetings scheduled for his trip, “Putin may be the easiest of them all.”

The meeting will be closely watched to see whether Trump will rebuke or embrace Putin.  Trump said Tuesday that he “can’t say right now” if Putin is a friend or foe, but called him a “competitor.”

The U.S. intelligence community has concluded that Russia interfered in the 2016 election to boost Trump’s candidacy, and warns of further attempts at interference both in the 2018 midterms and in European elections.  Putin has repeatedly denied the allegations of election meddling despite conclusive evidence to the contrary.