When Trump had a chance to visit the American Military Cemetery in France due to rain, or the helicopter couldn’t fly, and the Secret Service wouldn’t drive him.  This, according to Jeffrey Goldberg’s breaking story tonight.

When I heard this story tonight, on MSNBC, I was not shocked, not disgusted but completely PISSED OFF!  As a US Navy Disabled Veteran, who served my country from 01 AUG 1980 – 26 SEP 1991 and still serve to this day as a member of Bugles Across America and perform live TAPS for our fallen HEROES!

We have given our lives in service to this country. I would do it again in a heartbeat. This is not surprising coming from Donald Trump and he’s the most selfish person in the history of the world.  He’s pathetic, sick, ill, a narcissist, sociopath, and a dangerous man with the job of being our president.

The brave men and women who are in harms way everyday of their lives. He dodged the draft for a reason. We swear an oath to the UNITED STATES CONSTITUTION with the willingness to put MY LIFE, our lives on the line for our great 243 year experiment. This is our fundamental values.  I served under two presidents:  Reagan and Bush 41. I may not have agreed with all their policies or them, at times, but hot damn, I didn’t serve them, I served our great country.

This is the man, our current occupant of 1600 Pennsylvania Ave, that claims he cares about the military, loves our veterans and defaces the American flag by wrapping his sickening body around it and smiling. What’s worse, the people that love what he does have drunk the Kool-Aid so much that their brains are addicted to his disgusting vile words. They cannot see their way out of the grave they put themselves in and Trump is defecating all over them while they stand there waiting for more. All the while laughing out loud at them for being sheeple!

The things I want to say would probably have me removed from the planet, so I will temper my anger. Actually, I don’t hate the man, I don’t feel sorry for him, I feel sad for him. He was told by his father that if he joined the military like his late brother Robert wanted to, he would be disowned from the family and thrown aside.

This is exactly what he told his son, Don Jr.  This is not what my late father told me. He fought in Korea. I was in the beginnings of the Gulf War and served at the Pentagon, D-Ring, the Navy Command Center.

Tonight’s horrendous report from Jeffrey Goldberg, should open the eyes of those that are on the fence about who to vote for, especially those in the military. Nearly 63% of the military no longer support him. He didn’t want to travel to Aisne-Marne American Cemetery in Belleau Wood, France because he was afraid his hair would not survive the rain when the truth is, his heart could not take the visit. John F Kelly, former Chief of Staff of the White House, found a way to get there.

Maya Angelou said, and I am paraphrasing here, “People will show you who they are, the first time. Believe them because that is who they are.”

If all the people that fought and died in the history of our country wanted “profit” and “preferred to get something out of it” do you really believe we’d be the United States of America? If all the men that fought in WWII, decided, “I’m not getting anything from this…I quit…” as Hitler was preparing to overtake the world, do you really believe that we would be under the Stars and Stripes right now? No.

All this president cares about is himself. He can’t handle caring about the people of this great nation. He cares about nothing but the Trump family. If I was president, I’d be performing TAPS on Memorial Day and Veterans Day, in the rain or snow, if required, in full service dress blues to HONOR all our fallen heroes. From Washington’s drive through the snow, with hardly no supplies, men dying from disease, cold, and worn out, to stop the British so that America could be America to the current wars that we are in today.

I want every single American that reads this to share it, read it, and know that in your heart if you vote for this man, you are putting the final nail in the coffin of our great experiment. Benjamin Franklin said, “This is a republic, if we can keep it!”

How badly do you want America because she’s going to fight you, kick, and scream all the way. How much is FREEDOM worth to you? How much is freedom of speech, freedom of religion, the right to bear arms (yeah, I just said that and I AM a Democrat but NOT a Liberal), and all the other freedoms America has that no other country on earth does. America will put up a fight every single step of the way. You have to want it bad enough to keep it. Do you? Do you really?

I am appealing to ALL my brothers and sisters across this great land. Republican, Democrat, Conservative, Liberal, Green, Black, Brown, White, Left, Right, whoever you are, I beg you, STOP THE HATE! STOP THE fighting! STOP what is happening because it only FEEDS that mad king in the White House who LOVES what’s happening. He sits there, with a 12 foot wall around the White House compound where you can barely see OUR HOUSE now. He does that because he’s afraid. He’s a child and we need to treat him like “a child!”

He INSULTED me and millions of military veterans, dead and alive and needs to be removed from the White House.  If you support him and you are a military veteran or currently serving and this doesn’t bother you, then, I shall pray for you.  You have to open your eyes, open your mind, open your heart, and DO NOT be afraid of him. HE CANNOT HURT YOU! He’s just a man with a title and abusing that title! He’s INSULTED THE US MILITARY! Wake up America!

Do you understand when he says, “I’m cutting the payroll tax,” that he’s shutting down your social security ending completely and forever in 2023. It will NEVER TO COME BACK! Do you understand what that means? It means, you will NOT have your retirement when you want to stop working. Look it up! That payroll tax goes into the Social Security fund that is yours and yours alone from your paychecks since you started working.  Do you really want to vote for him now?

Look, I grew up a Republican and after G.H.W. Bush, I stopped voting Republican. Now, the Republican Party, the party of Lincoln, that I grew up with, no longer exists. It….is….GONE!  So, consider what you do on November 3rd, 2020. Choose wisely. If anything I’ve written here gets through let it be this one thing: AMERICA is MY COUNTRY, it’s YOUR COUNTRY and if you want to lose everything on November 4th, then vote for Trump. However, if you want to put AMERICA BACK to a normalcy, a country where civility is possible, where we talk about stopping black lives being snuffed out by cops with a trigger finger, where we don’t put kids in cages, where you get live the life you’ve always wanted and do have have the US GESTAPO coming to a town near you, then vote for Joe Biden.

Please, please, please… think carefully. Choose wisely and love everyone. Love your neighbor as yourself. hug your neighbor even if your neighbor is black or brown and you are white. Even if you are a staunch Trump supporter, sit down with your Democratic neighbor and just TALK. Just sit and talk. Don’t fight, don’t kill each other, learn about each other and resolve your differences in a civil manner.

Trump divides families, divides towns, divides cities, divides states and finally, divides the country.  Joe Biden is right! You cannot defeat hate. It only hides. What happened in 2015 is that everyone that was hiding had a voice and came out from under that rock with no more fear.

If that video didn’t move you, this will.

Thank you for reading and God Bless everyone. God Bless the United States of America. I love all of you.. no matter who you are.

Here are screen shots of some of the important quotes from Jeffrey’s article. Thank you Jeffrey Goldberg! 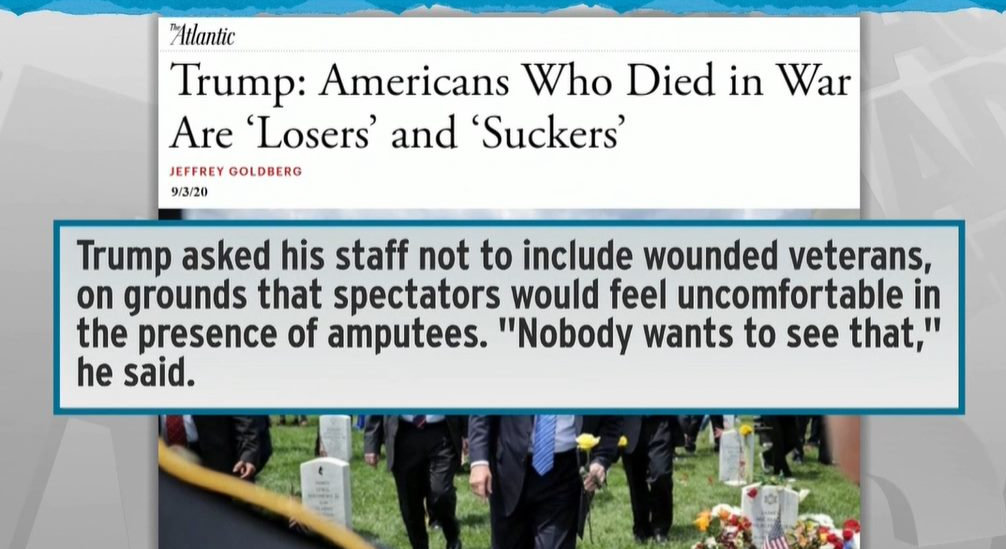 Here’s the link to the full article by Jeffrey Goldberg with The Atlantic. I suggest you READ IT COMPLETELY!  READ AND SHARE IT and know that the President of the United States said this about US! WE VETERANS, WE THE MILITARY who DEFEND our country with our lives if required with honor and pride.

If you don’t like a book or it’s contents, don’t ban it, just don’t read it.

Where were you on September 11th, 2001? Here’s my thoughts on that fateful day!