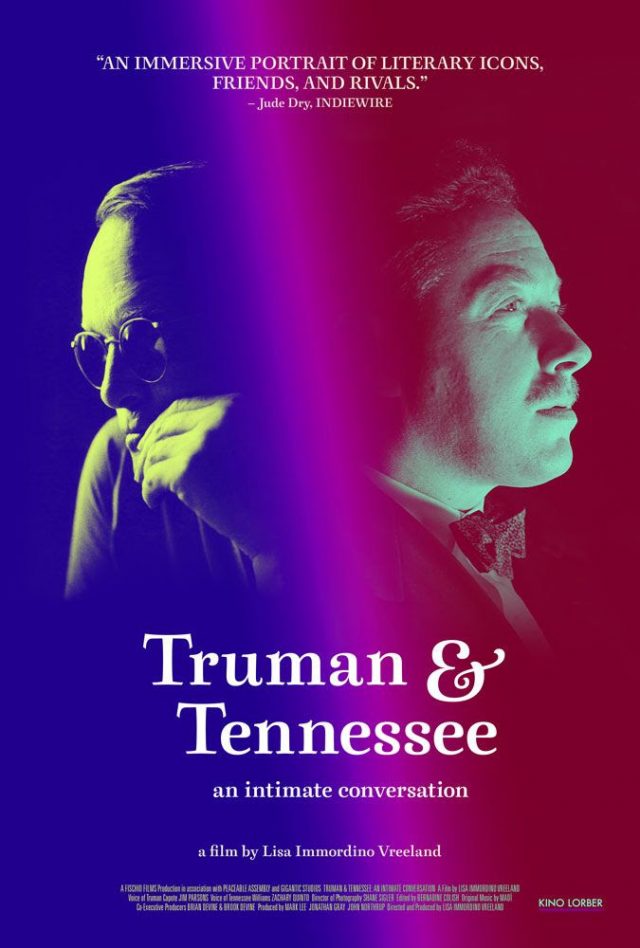 What was the cultural impact of these Iconic American Writers?

Truman Capote & Tennessee William’s works both mark a high point in American literary history’s Southern Gothic movement. Their writings reflected their true feelings and they were not afraid to put their most private thoughts on paper. This paved a path for many writers and readers to be influenced by their work. In addition, Tennessee Williams to this day is regarded as one of the greatest playwrights in American history. His plays are performed throughout the world and his characters and languages have not only become the vernacular of the theater, but of our culture.

Your film, Truman and Tennessee is a masterful collage. Tell us about your creative process for the film.

It was very clear from the start that the presence of talking heads was not necessary for the narrative arc of the film. The words of the writers themselves would act as the foundation of the film. Besides that, we used archival footage of the writers, photographs, and original footage that we created. We were intent on creating a dreamlike sequence where the words and images seemed to be floating throughout the film where the audience had the sensation that they were eavesdropping on a conversation between these two great writers.

There is a fearless candor and often tumultuous friendship between them. Can you share a favorite scene?

I love these moments in the film and my favorite is when they are on the island of Ischia in Italy. They are both vacationing with their respective partners and under their breath commenting on the vibrancy of each other’s sex lives and their prowess as writers.

Their timeless artistic achievements transcend boundaries. Who were Truman and Tennessee?

When I make these films I do make them for a younger generation, I want to show them why these characters are important. In the case of Truman Capote and Tennessee Williams, their words are the focus of the film in the hopes that their talent as writers is clearly depicted. Often in history, it is the personality that outshines the legacy and in the case of both of these writers, it is their work that needs to be remembered.

Why were Jim Parsons (Capote) and Zachary Quinto (Williams) the perfect combination for your film?

It was a dream to be able to have Jim Parsons and Zachary Quinto collaborate on this project. They are both passionate about Capote and Williams’s work and are openly gay actors in Hollywood. They have embraced their identity just as the writers themselves did. They gave a beautiful performance and gave the emotional gravitas that their words needed for the film.

What did you learn from these iconic writers?

I have so many takeaways from the films I make. The experience of creating a film that is made entirely from the words of these two literary giants allowed me to reveal they’re true personalities for the audience. I learned the most from Tennessee Williams. He was unapologetically open about his inner feelings and approached both his personal and professional life with honesty. I was not as acutely aware of this when I started the project.

“Truman and Tennessee: An Intimate Conversation”