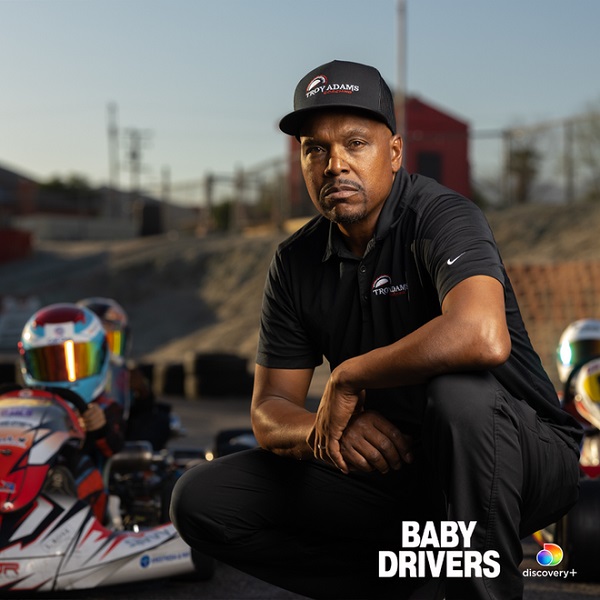 Troy Adams, star of the hit TV series “Baby Drivers” on Discovery + and the owner of Adams Motorsports Park featured on the TV show, a platform to raise up a new generation of Elite Athletes and Family Fun talks about the show and running his business in Riverside, California.

I had no idea that go-kart racing was such a big thing and especially that there are children as young as 5. Troy said he is currently working with a 68 year old man, which is totally awesome.  I can’t wait to go out to Riverside and visit with Troy, wife Kara and son Truly at Adams Motorsports Park to see how the organization operates in person.

Troy also said they have been racing down in Mexico and spoke highly of the competition and track there.  His son Truly just happens to be fluent in Spanish!

Here is a YouTube video to watch of Troy, his son Truly and the team down in Mexico.

We often hear this quote, “behind every man is a good women” and according to Troy this is so true as he spoke of his wife Kara, that she was the one that arranged for them to be on the “Baby Drivers” show.  Way to go Kara! I was told that she has written a book called “Hidden Treasure“. Part memoir and part personal development, a harrowing and deeply inspiring walk through her own past including infidelity, infertility, family trauma, and her life-threatening illness to show us that despite any circumstance, we can rise to live the passion and purpose designed for us.  Sounds like a book worth reading.

Adams Motorsports Park is located in Riverside, California just north of the 60 Fwy on Market Street, on the corner of 24th and Market.

I was able to stream the show “Baby Drivers” on Discovery+ this weekend and I have to say, it sure is a great show to watch as Troy works with these youngster and their parents. Actually the parents can be extremely hard to deal with.  But this comes with all types of sports that include kids.  I’d have to say a great reality show to share with the kids and grandkids. Check it out on discoveryplus.com

Today, I had the opportunity to speak with Troy about his “Baby Driver” show on Discovery+.  Enjoy our conversation:

In this all-new series, Troy trains & accesses the latest team of competitors.  Among them include:

In addition to seeing Coach Troy in action with these unforgettable kids, he also takes on the task of coaching his own son, Truly, whose dream is to become a Formula 1 racer. But will Truly be able to live up to the Adam’s family lineage? With each family’s reputation on the line, these kids are willing to do whatever it takes to make it across the finish line first.

In 1960, his family opened Adams Kart Track, now known as Adams Motorsports Park. It was the first African American-owned racing facility in California and the largest facility of its kind in the Western U.S.  Now, Adams Motorsport Park, Inc. AMP has developed into one of California’s fastest-growing grassroots racing facilities in the United States.

The days are getting hot at Adams Motorsport Park, as Troy has been instrumental in strengthening the AMP brand by creating new programs like Friday Night Time Attack and Saturday Night Drift which has attracted a completely new demographic.

Troy trains his son, Truly Adams, along with the other cast members on Baby Drivers. In the high-stakes world of motorsports, nothing is more intense than competitive go-karting and the parents of young racers know that if anyone can get their kid to the top, it’s Troy Adams of the legendary Adams Motorsports Park.

This is the breeding ground for the next racing superstar, and for the dads and moms of kids as young as 7 years old who are dangerously taking corners at 70mph, extreme risk, and big money are the name of the game.  Families will spend up to $10,000 in a weekend and put all else in their lives on hold to support their young drivers.

Troy’s services are in high demand as MC at car shows, large race events, and conventions. Troy is best known for his driver development skills and teaches professional drivers all over the world.

An interesting by-product of these programs is the popularity and demand for Troy’s services as an MC expertise and passion have allowed him to develop many upcoming racers throughout the motorsports industry.

No matter what the future brings, Troy Adams will face it as he always does…pedal to the metal, throttle wide open and at full speed.

In addition to streaming “Baby Drivers” on discovery+, viewers can join the conversation on social media by using #BabyDrivers and following @discoverymotor and @discoveryplus on Facebook, Twitter, Instagram, and TikTok. For more, visit discoveryplus.com

For over 60 years, Adams Motorsports Park has led the way in training hundreds of kids to take their first step towards their dreams of racing professionally, whether NASCAR to Formula 1, off-road and more. As one of the first African American-owned tracks in the country, go-karting is more than a hobby, it’s a platform to raise up a new generation of elite athletes.