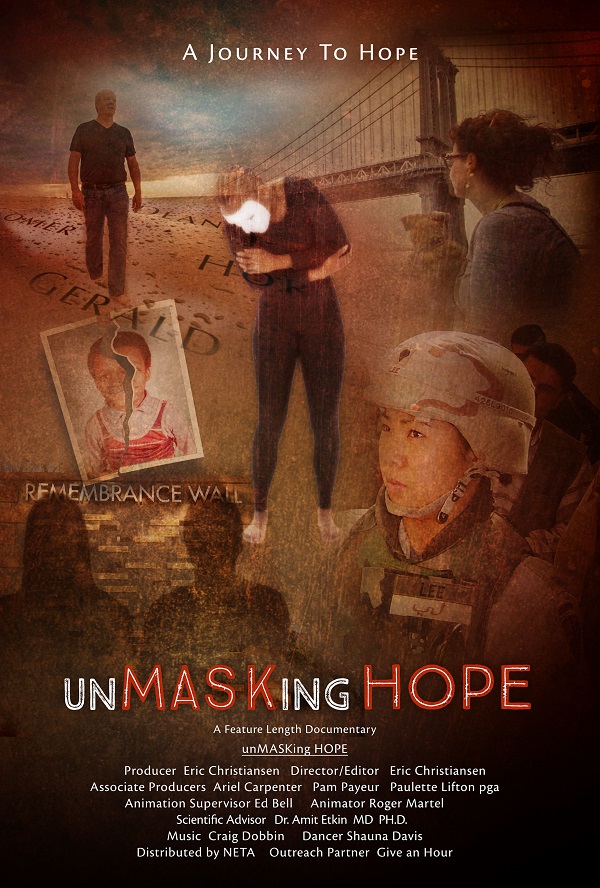 Distributed by NETA, unMASKing HOPE follows the healing stories of a diverse group of trauma survivors on their extraordinary journeys to find hope.

Partnership with national mental health organization Give an Hour focuses on creating the largest impact possible around the film’s critical issues.

The film is also available via Passport, the digital on-demand library of content for PBS members.

From 9/11 and mass shooting survivors to military combat soldiers and sexual assault victims, unMASKing HOPE explores the all-too-familiar face of trauma through the stories of survivors as they emerge from beneath masks that hide their emotional scars and hinder their recovery. The film chronicles their extraordinary healing journeys through deeply personal interviews, interpretive dance, and lyrical animation. These remarkable individuals demonstrate the resiliency of the human spirit and promote tolerance and empathy for those who have been stigmatized by unthinkable traumatic events. Ultimately, unMASKing HOPE shares a powerful message of hope that can inspire audiences to unmask their own hope.

“I am honored to be able to share these incredible stories of surviving trauma and finding hope with public television audiences through NETA,” said Eric Christiansen, unMASKing HOPE‘s writer, director and producer. “The film offers important insights into trauma recovery from some of the most preeminent experts and researchers in the fields.”

Educational resources, along with webinars, focused on “Healing with Hope” and eliminating the stigma associated with trauma were provided and sponsored by Give an Hour in partnership with the documentary. The nonprofit organization is dedicated to creating resilient individuals and communities by prioritizing mental health and emotional well-being and ensuring those who need mental health care have access to the help they need.

“This partnership allows us to reach a wider audience by ensuring the appropriate and necessary mental health tools are readily available to those who need them,” said Dr. Trina Clayeux, CEO of Give an Hour. “Eric’s brand of storytelling creates a novel opportunity for Give an Hour to lend its expertise in helping survivors heal through their trauma.”

The film features top mental health professionals sharing their insight and expertise to educate viewers about the struggles that survivors face as they try to heal their wounds. Notable interviews include commentary from Amit Etkin, MD, PhD, and Founder and CEO of Alto Neuroscience; M. Katherine Shear, MD, Columbia, The Center for Prolonged Grief; and Arieh Y. Shalev, MD, Hebrew University of Jerusalem.

“unMASKing HOPE creates a safe space for people who have experienced trauma to connect with others by presenting a dialogue for doing so,” said Dr. Etkin. “As a psychiatrist and neuroscientist, I can testify to the relatability of the raw emotions and personal stories shared in the film for those who may be struggling after trauma. I am grateful to be included in this educational, artful feature aimed at bringing well-deserved hope to these individuals.”

Filmmaker Eric Christiansen, a seven-time Southwestern Region Emmy-award recipient, saw critical and commercial success with his last film in 2016, “Searching for Home: Coming Back from War,” which explored the harrowing effects of post-traumatic stress disorder (PTSD) on military families after veterans returned from combat.  The documentary was distributed nationally by NETA and aired more than 2,300 times with an estimated 10 million viewers during its run on public television. The film received five-star ratings on iTunes and Amazon Video.

A private screening and panel discussion moderated by KCRW’s Jonathan Bastian takes place Jan. 19, 2023 at the Laemmle Royal theater in Los Angeles. The event was made possible by donations from Give An Hour and Alto Neuroscience.

Here are photos from that event on January 19th.

unMASKing HOPE is a fiscally sponsored project of the International Documentary Association (IDA).

Eric Christiansen is an acclaimed documentarian who has built his life’s work around socially responsible filmmaking that educates, inspires and most importantly, heals. Christiansen, a seven-time Southwestern Region Emmy Award recipient, explores the impact of trauma; how we adapt to grief; the resilience of the human spirit; and how a powerful platform for hope can help trauma survivors begin the vigilant journey of healing. A trauma survivor himself, Christiansen worked through the loss of his home and possessions in the Painted Cave Fire by creating his first film, Faces in the Fire 25 years ago.

All of his films (Faces in the Fire, Homecoming: A Vietnam Vets Journey, Searching for Home: Coming Back from War) have been transformative in the recovery process for thousands of people whose lives have been compromised mentally, spiritually and physically by trauma. Leveraged as educational tools by top mental health institutions, Christiansen’s films migrate from the entertainment arena into environments that help additional audiences navigate the profound collateral damage trauma creates not only on the individual, but the family and community as well.  The New York Times called his last film, Searching for Home: Coming Back from War, “…strikingly photographed” and “…sure to give comfort and support to countless veterans and their families.” By spotlighting these survivors and their journeys, Christiansen has been able to help unify a variety of audiences around the power of HOPE, and educate the general population about the complexities of trauma.  Christiansen has recently been named an ambassador by the non-profit organization Give an Hour, cementing his position as an “ambassador of HOPE.” He has also produced content for major networks including Discovery, TLC, PBS, MTV, and an Imax film.

About Give an Hour

Founded in 2005, Give an Hour® is a nonprofit organization dedicated to transforming mental health by building strong and healthy individuals and communities. We provide no-cost counseling through a network of volunteer mental health professionals and empower community through collaborative programs, peer support and educational opportunities that benefit both clients and providers. Our efforts focus on people impacted by military service, mass violence, the opioid epidemic, and interpersonal violence.  For more information, visit: giveanhour.org.

The National Educational Telecommunications Association (NETA) is one of the nation’s leading service organizations strengthening and amplifying public media’s education mission. We are a 501(c)(3) membership organization providing leadership, support, and services to individual public media licensees, their affinity groups, and the public media system as a whole.  netaonline.org/about-us