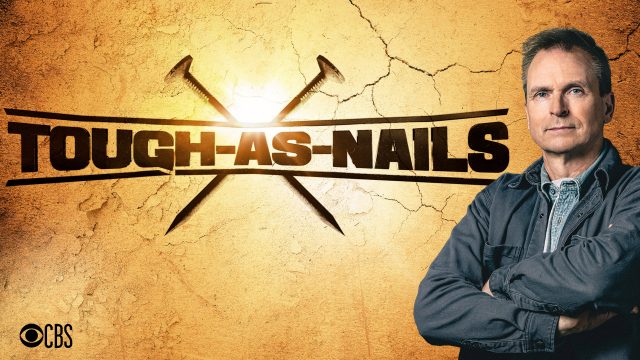 If you weren’t one of the four million viewers of the first season or didn’t see a promo of CBS Television Network’s TOUGH AS NAILS, don’t be misled by the show’s title. This is not a series about a posh nail salon frequented by the rich and famous to get their weekly manicures and pedicures, although the 12 contestants of season two, airing Wednesday, Feb. 10 (8:00 – 9:00 PM, ET/PT) may very well need both, as they compete in this down and dirty reality television show.

Phil Keoghan, creator, and executive producer states, “The purpose of TOUGH AS NAILS is to put the spotlight on the unsung heroes of this country. The men and women who do the rigorous jobs, providing essential services for the public,” many of which are taken for granted, even though their dedication makes our daily lives easier. Keoghan adds, “The show brings people together and gives a new appreciation for these workers doing these kinds of unglamorous jobs that benefit the public. These men and women, from all walks of life, are the best of the best.”

Put on your hard hats and keep an eye out for the caution signs while you watch these varied and difficult work-related contests. Each episode begins with individuals competing against each other to complete the given task ahead of the other workers. The top two to finish are named crew bosses. From there, they each pick their crew for team competitions. The thought brings flashbacks of high school PE class, where I was always the last one picked. After some years of therapy I was able to get past all that humiliation, the very reason I never attended any of my High School Class Reunions.

The returning show has an array of committed workers: Construction Supervisor; Mariner; Delivery Driver; Retired Air Force Colonel and the first black woman to fly the high altitude reconnaissance aircraft known as the Lockheed U-2; Bricklayer; USW Steelworker; Pipe Welder; Power Line Technician; Transit Track Repairer; Traveling Nurse; a Cement Mason; a Water Proof Contractor…I’m exhausted just thinking about doing any of those jobs. Transit Track Repairer, Iraida, enthusiastically expressed that she’s “so stoked about the competition. We’re just normal people that do tough jobs.” I, on the other hand, see nothing normal about them. Each member of this year’s contestants is unique and highly committed to their chosen careers. They’re all winners in my book.

The Traveling Nurse, Celi, says, “I fought Covid-19 and I’m a superhero that wears scrubs.” These work-warriors are clearly not afraid of getting their hands dirty to see that the job is done right, even if it’s outside of their fields of proficiency. Merryl, the retired Air Force Colonel, states, “This is a multifaceted contest. You have to be good in a lot of areas.” The contestants are required to face unfamiliar job challenges. This tests their endurance, strength, mental persistence, and all-around skill set. Mr. Keoghan shares, “What makes our show different from other such reality programming is that those who fail at a challenge don’t exit the game. They’re here to the end and are still given the possibility to win prizes during team competitions.”

In the group rivalries, the winning team receives $12,000 split six ways and earns a Badge of Honor for each win. Those badges are as good as gold. Steelworker, Swifty, conveys, “I have two sons that are going to watch to see how tough I really am.” At the end of the season, the team that has accumulated the most Badges of Honor receives an added bonus of $60,000, and like the team competitions,

the prize money is split six ways making that $10,000 for each team member. Also, one very formidable opponent will be crowned the TOUGH AS NAILS champion. The reward for such an accomplishment is a whopping $200,000 grand prize and 2021, Ford F150 truck—to drive the money all the way to the bank. Construction Foreman, Angel, informs, “My strategy is to give it my blood, sweat, and tears.” Tune in for season two of TOUGH AS NAILS and find out just who is the toughest of the toughest. Phil Keoghan: “I’m excited to be back for season two and with this amazing cast of workers. America loves the program and wants to see more.” CBS Television Network programming is going to make sure its viewers get what they want. May the best man or woman triumph!