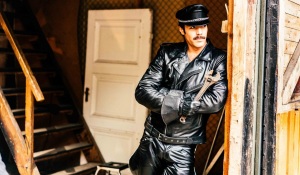 Award-winning filmmaker Dome Karukoski brings to screen the life and work of one of the most influential and celebrated figures of twentieth century LGBTQ culture.

Touko Laaksonen, a decorated officer, returns home after a harrowing and heroic experience serving his country in World War II. But life in Finland during peacetime proves equally distressing. He finds post-war Helsinki rampant with homophobic persecution, and gay men around him are being pressured to marry women and have children. Touko finds refuge in his liberating art: homoerotic drawings of muscular men, free of inhibitions.

But it is only when an American publisher sees them and invites Tuoko over to the West Coast that his life really takes a turn. Finally being able to walk free and proud in Los Angeles, Tuoko dives head first into the sexual revolution, becoming an icon and a rallying point. His work – made famous by his signature ‘Tom of Finland’ – became the emblem of a generation of men and fanned the flames of the worldwide gay revolution.

One of Finland’s most acclaimed directors, Dome Karukoski has been named one of “Variety’s” Top 10 Directors to Watch and his films have gathered numerous international awards. Winner of several Finnish National Film Awards, and Best Director for Dark Butterflies and Lapland Odyssey, Karukoski’s films are as successful abroad as they are at home. Karukoskihas recently been set to direct THE STARLING starring Keanu Reeves andTOLKIEN, a biopic of J.R.R.Tolkien, who wrote The Lord of The Rings and The Hobbit.

With a library of more than 1,000 titles, Kino Lorber Inc. has been a leader in independent art house distribution for over 30 years, releasing 25 films per year theatrically under its Kino Lorber, Kino Classics, and Alive Mind Cinema banners, including five Academy Award® nominated films in the last seven years.

In addition, the company brings over 100 narrative and documentary titles each year to the home entertainment, educational and digital markets with in-house DVD and Blu-ray distribution and direct sales to all major platforms digital platforms.