Los Angeles, California (The Hollywood Times) 5/20/2021 –  LORI ARNOLD EXPOSES HER LIFE AS A DRUG-DEALING QUEENPIN IN THE EXCLUSIVE DISCOVERY+ DOCUSERIES QUEEN OF METH.

In Queen of Meth, Lori confronts her past by visiting old haunts and rehashing memories with friends and family, including her famous brother, Tom Arnold. Lori and Tom’s vivid recollections of their formative years reveal hidden family secrets and trauma, poignantly piecing together how Lori’s disturbing childhood and wild adolescence led her down a drug-riddled path. More than a trip down memory lane, Queen of Meth showcases just how this highly successful and unlikely entrepreneur oversaw a multi-million-dollar meth empire, and how even within the ravages of addiction, she was able to flip poverty to prosperity. As she reconnects with friends from her hometown and her estranged son, Josh, she is faced with the repercussions of her actions and the destruction left in her wake, which continues to have devastating consequences in the community and beyond.

Where do you think it went wrong with Lori?

Really, it started with our mother. They were best friends. She wasn’t a mother figure. They smoked and drank and there wasn’t a good example set for her when we were growing up.

Did you lose touch with your sister for years? 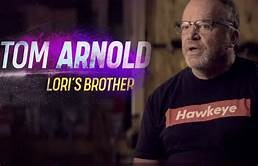 I had to separate from Lori when I got sober. I needed to concentrate on my sobriety and make sure that I wasn’t around anything that could influence that negatively. We connected again after she was arrested for the second time and I suggested that she write a book about her life while in prison. That is really how Queen of Meth started.

Is it true that two people can witness the same event, yet their perspective is totally different? Tell us about your mother. Who is your mother to Lori?

To Lori, our mother is a buddy, a best friend but not one that impacts you in the best way. To me, I blame our mother for leading Lori down the path of destruction her life took.

Do you believe honesty is the best policy in all situations?

I think when dealing with a person who has an addiction like Lori and I have experienced being honest is the only way to operate.

Do you believe that people deserve a second chance? Can people change?

Absolutely! I am living proof of that. I have had many chances at getting my life back on track and so has Lori. And, we have succeeded. I am proud of her and where she has come from and what she has accomplished after going through what she has.

What do you love the most about your sister?

My sister is a survivor – plain and simple!