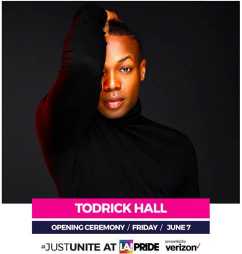 LOS ANGELES, June 4, 2019 – Today, Christopher Street West (CSW) – the non-profit that produces the annual LA Pride Festival and Parade in West Hollywood presented by Verizon – announced that singer, actor, dancer, recording artist, director and choreographer Todrick Hall has been added to the lineup for the LA Pride Opening Ceremony presented by Johnson & Johnson. Hall’s performance is the latest addition to the free programming that will take place on Friday, June 7, and also includes a special 60-minute performance by EMMY and GRAMMY® Award-winning artist Paula Abdul powered by Caesars Entertainment.

The LA Pride Friday night programming features a variety of opportunities for the community to participate in the festivities at no cost. The Opening Ceremony begins at 8pm with special remarks from a diverse mix of community and spiritual leaders and advocates for the LGBTQ+ community. LA Pride’s presenting sponsor, Verizon, will also host the US premiere of their documentary film, 5B, which follows the inspirational story of nurses and caregivers of the first HIV/AIDS ward in the country. Additional entertainment for the evening includes a full night of music and dancing from local DJs.

“I’m so excited to join the amazing lineup of this year’s LA Pride Festival. The weekend is going to be unforgettable, and I can’t wait to get the Haus Party started,” said Todrick Hall. “We are going to celebrate this year’s #JUSTUNITE theme together as a community!”

The Opening Ceremony provides a great opportunity for the community to #JUSTUNITE and come together before the festival. #JUSTUNITE makes a simple, yet powerful statement: that the work the LGBTQ+ community does together is ultimately what will make it stronger and more resilient than ever before.

Ticket sales and proceeds from the LA Pride Festival support and fund the LA Pride Parade and CSW’s philanthropic efforts. This includes community-wide programs like Casa del Sol, a joint project with APLA Health that provides low-income housing to people living with HIV/AIDS, and PLATform, a policy, leadership, and advocacy training program to help amplify the voices of the transgender community. Additionally, proceeds benefit the USC GLASS Endowed Scholarship, a grant program awarded to students to help them conduct research affirming the important role the LGBTQ+ community plays in society today. Funds raised will also help CSW prepare for its 50th anniversary in 2020.

Christopher Street West engages with JJLA LLC in the event production and management of the LA PRIDE Festival & Parade. For more information on JJLA visit www.jj-la.com. LA Pride is made possible thanks to generous sponsorships from its corporate partners like Verizon and supports from the City of West Hollywood.

Christopher Street West (CSW), a 501(c)3 non-profit, organized the world’s first permitted parade advocating for gay rights on June 28, 1970, as a response to and in commemoration of the Stonewall Rebellion on Christopher Street in New York City the year prior. Since then, we have built a rich history as an active voice for the LGBTQ+ community across the Greater Los Angeles metropolitan area. Today, we continue to produce the globally-recognized LA Pride Parade and Festival every June in the City of West Hollywood. We also organize a number of events throughout the year with our nonprofit, philanthropic, community, and corporate partners. Visit lapride.org for more information.