Los Angeles, CA (The Hollywood Times) 10/22/21 – Definitely worth seeing is Todd Haynes’ The Velvet Underground, a rock ‘n’ roll documentary that doesn’t really follow the normal rules for rock-docs. Todd Haynes makes it clear from the start that this whirlwind tour of the short-lived but immeasurably influential life of this band The Velvet Underground will by-and-large be told using the visual syntax of the band’s peers.  A film about the Velvets would not be satisfying if it was conventional, and following normal rules is definitely not an approach that would give Todd Haynes a reason to make his first real documentary. Haynes’ film engages the experimental aesthetics of the 1960s and the experimental filmmaking of Stan Brakhage, Kenneth Angers, Shirley Clark, and, of course, Andy Warhol. These experimenters in cinema made an elastic, volatile toy of the medium in the way that the Velvet Underground’s music toyed with (and upset) the conventions of rock & roll that the band chewed through in its short career.  After screening for a week at the Nuart Theatre in West L.A., it opens on October 15 at several Laemmle theatres around town and can be screened virtually on Apple TV. 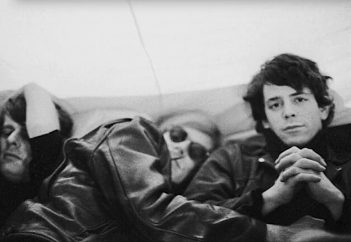 Haynes, the uncommonly sensitive director of Carol, I’m Not There and Far From Heaven, among others, isn’t here to give us a blow-by-blow account of the New York band that was adopted by Andy Warhol’s Factory scene. The Velvets proved to be far too extreme to enjoy mainstream success, but extreme enough to inspire acolytes who, as Brian Eno once famously pointed out, all formed their own bands. The movie is not averse to the straightforward use of talking heads or archival audio to tell a straight-ish story where it counts. But Haynes has not fashioned this movie into a virtual classroom in which we will all dutifully jot down notes on John Cage and Allan Ginsberg. Better to give us the Velvet Underground themselves narrating their pains and obsessions, for us to sit back, sponge-like, and be as overwhelmed by what, in Haynes’s hands, suddenly feels radical, again.

The film opens with us looking at Lou Reed’s face, looking out at us, on one panel of the screen. This is one of many of Andy Warhol’s “Screen Test” series that he shot with Lou Reed and others at The Factory in New York City. Haynes uses multiple screens through this documentary. Balancing Lou Reed’s face, we see other images begin to emerge in the other panel: Reed’s sister, Merrill Reed Weiner, narrating life and that imperfect Long Island upbringing as she and her brother knew it. A mix of family photographs and stock footage illustrate tales of a father’s emotional absence. Reed’s own recollections of his early forays into music, his choice to forego proper music lessons to instead play along with doo-wop and early rock on the radio, booking gigs while still in high school. Imagine that the indomitable Welshman John Cale’s life story comes next, much in the same way: a long shot of the young man’s face – again, by way of Warhol – and a life narrated in retrospect, a split-screen mix of personal archive and period stock, with pointed music cues directing us to the man’s externally imposed classical origins.

These are origins that each man would in some ways reject. But The Velvet Underground is too wise in its passion for lore and ephemera, the nit and the grit of lived history to whittle itself down to linear, causal mythologizing. That’s the stuff of rock legend and bloated biopics. Instead, let’s revel in the power of association: between the elder Reed’s voice and the young Reed’s face, for example, or between monologued personal histories and the visual detritus that throws the personal into relief. Before the doc even announces itself with a title card and needle drop (“Venus in Furs,” inescapably), it treats us to a seemingly-indirect starting point for this journey, via a 1963 clip of John Cale on the gameshow “I’ve Got a Secret” as he bewilders the American TV public with a taste of Erik Satie’s “Vexations.” It’s an incredible moment in television history on its own. Here, it’s a nudge to draw a line from Cale and the band that would call itself the Velvet Underground to the avant-pop aficionados who’d equally define the era.

The bedrock of Velvet Underground is its generous and dynamic deployment of rare footage from Andy Warhol’s The Factory and guided tours (via media that ranges from the personal and archival to the cynically commercial and impersonal) of the how and when and what of the both the specific avant-garde scene at its center and the America writ large that somehow gave rise to that scene. Haynes has made the people comprising this story feel unusually present, here with us in the room as we watch. Andy Warhol and John Cage; Lou Reed and John Cale – and soon drummer Moe Tucker, Doug Yule, Nico, Tony Conrad; the filmmakers Jonas Mekas (captured here in his final interview before his death in 2019) and camp director John Waters; poet Delmore Schwartz; artist-musicians the likes of Jonathan Richman, Marian Zazeela, and La Monte Young; and Warhol icon Mary Woronov. Andy Warhol had a great fondness for Lou Reed and is probably what motivated him to underwrite the Velvet Underground.

That immersive nature is the real key to the film, which uses split screens, purposefully jarring edits and lengthy shots from old Warhol movies of the band members simply staring into the camera. It’s chronological and straightforward, in a way, but it also sneaks up on you and surrounds you with sheer sound – forget the lyrics to “Heroin,” this movie will remind you just how extreme the song was musically. Many of the key players are now gone: icy German chanteuse Nico, who joined the band at Warhol’s insistence for a few songs on their first album, died after a cycling accident in 1988; guitarist Sterling Morrison died of non-Hodgkin’s lymphoma in 1995, at the age of 53; and Lou Reed, the band’s main songwriter and singer, died of liver cancer in 2013. 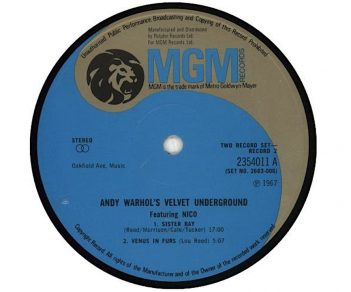 Reed, meanwhile, used the rock-song format to deal with drug use, sadomasochism and other topics that rarely made much headway on the radio of the 1960s. While the film lightly touches on the shock treatments Reed underwent during a troubled time in his life, it resists using them as an easy explanation for his music. (In fact, his sister explicitly warns against that.) It seems that Reed had homosexual inclinations and electric shock therapy was used to try to curb those desires. It is curious that at age 16 he was performing on guitar with songs he wrote in a local New York gay bar and seems to have had plenty of male encounters. Later at SUNY Syracuse, he befriended poet Delmore Schwartz and developed a heroin addiction that haunted his life later. Reed was a temperamental person and his demanding, often unpleasant manner was divisive – so much so that it finally drove the band apart. “I really didn’t know how to please him,” says Cale, strong-willed himself. “You try to be nice, he just hates you even more.”

After taking deep dives into the first two albums, “The Velvet Underground and Nico” and “White Light/White Heat,” the film moves more quickly through the quieter and less necessary third and fourth albums, “The Velvet Underground” and “Loaded.” It even implies that those later works could be sellouts of a sort, which shortchanges the sublime “Sweet Jane,” which may sound fairly mainstream but is also a classic. Arriving in California on an unsuccessful tour, the band members found the California music scene full of hippies and flower children and predictable pop music like that of the Mamas and the Papas or Sonny & Cher. They had nothing nice to say about the more experimental Frank Zappa and his Mothers of Invention. However, after hearing the pop song “Monday, Monday” by the Mamas and the Papas, Lou Reed wrote a pop reply with “Sunday Morning” that was much more sunny that the usual darker lyrics of the Velvet Underground.

At the end – which means the end of the version of the Velvet Underground that included Reed – we get a moving montage that runs through the rest of the band members’ lives and careers, before slipping in an early ‘70s, acoustic version of “Heroin” performed by Reed, Cale and Nico in a way that is both heartbreaking, terrifying and uplifting. It’s a fitting end for a tough but magnificent documentary that somehow feels as if it’s exactly the right film to make about this most difficult and most essential band.