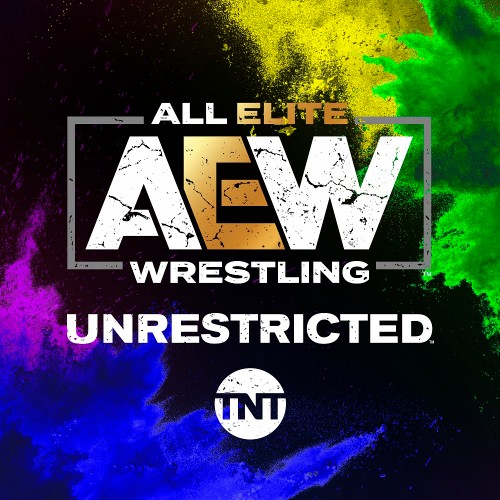 Launching today, Thursday, February 20, each one-hour episode will feature Edwards and Schiavone having in-depth conversations with AEW talent, sharing personal stories that will give exclusive insight into their diverse experiences in wrestling and their lives outside the ring.

“One of the things fans love about AEW is the relatability and authenticity of their diverse group of talented athletes,” says Kevin Reilly, chief content officer, HBO Max, president, TNT, TBS, and truTV. “AEW: UNRESTRICTED is another example of how we are creating deeper fan connections and providing a more robust, multidimensional wrestling experience.”

“I’m an avid consumer of wrestling podcasts. They’re a great way to gain insight into the best minds in the wrestling business,” says Tony Khan, president and CEO of AEW. “An AEW podcast was a must for me, and I know TNT saw it the same way. Our goal for UNRESTRICTED is to make it the best podcast in wrestling. We plan to create a new platform for our fans that will inform and entertain, and introduce a new dimension of our wrestling company, and complement the compelling storylines and great wrestling we deliver each week on DYNAMITE and DARK and at our pay-per-views.”

Initial episodes of AEW: UNRESTRICTED will feature interviews with Jon Moxley, Cody, The Young Bucks (Matt & Nick Jackson) and Brandi Rhodes. The podcast –produced, sold and distributed by WarnerMedia Podcast Network — is available for download on Apple Podcasts, Spotify, TuneIn, Google Podcasts or wherever fans download their favorite podcasts.  Fans will also be able to view the podcasts in video on the TNT app and YouTube. AEW: UNRESTRICTED joins WarnerMedia Podcast Network’s growing portfolio of news, sports and entertainment podcasts.

AEW: DYNAMITE exploded onto the wrestling scene when it premiered on TNT as Wednesday’s #1 wrestling show. One of this season’s top three new cable unscripted series, it has continued to deliver high performing episodes each week with the series averaging 1.2M total viewers and 651K A18-49 per episode in Live +7 Day viewing. In only four months, AEW: DYNAMITE has reached more than 37 million people across TNT’s linear and digital platforms. The show also delivers the youngest wrestling audience on television.

WarnerMedia announced recently that it has extended its deal with this groundbreaking new wrestling league through 2023, with this podcast being another way in which the parties are expanding their relationship with a singular focus on serving wrestling fans throughout the world.

About TNT
TNT, a WarnerMedia Entertainment brand, is watched by more people than any other cable network and known for big, lean-forward television that gives viewers the best seat in the house for electrifying stories, dynamic characters and thrilling events. TNT is home to some of television’s most popular original series including The Alienist, Animal Kingdom, Claws and I Am the Night, the upcoming sequel The Alienist: The Angel of Darkness, and the eagerly anticipated, sci-fi thriller Snowpiercer. TNT is expanding its programming to include premium unscripted with the docuseries Shaq Life, giving an all-access look at the larger-than-life personality. TNT also presents popular shows such as Bones and Castle, in addition to primetime specials and sports coverage, including the NBA and NCAA Division I Men’s Basketball Championships and the professional wrestling league All Elite Wrestling (AEW), which has exploded onto the scene with AEW Dynamite premiering as the night’s #1 wrestling show.
Website: www.tntdrama.com

About AEW
AEW is a new professional wrestling promotion headlined by members of The Elite (Cody & Brandi Rhodes, Matt & Nick Jackson, Kenny Omega and Hangman Page) and Chris Jericho and Jon Moxley.  For the first time in many years, AEW is offering an alternative to mainstream wrestling, with a growing roster of world-class male and female wrestlers who are poised to bring new spirit, freshness and energy to the industry.  The inaugural event under the AEW banner was DOUBLE OR NOTHING in Las Vegas in May 2019. AEW: DYNAMITE is a two-hour weekly show airing on Wednesdays from 8 to 10 p.m. ET on TNT.  The action-packed matches take place in different cities across the nation each Wednesday.  For more info, check out @AEWrestling (Twitter), @AllEliteWrestling (Instagram), / AllEliteWrestling (FB), AllEliteWrestling (YouTube).