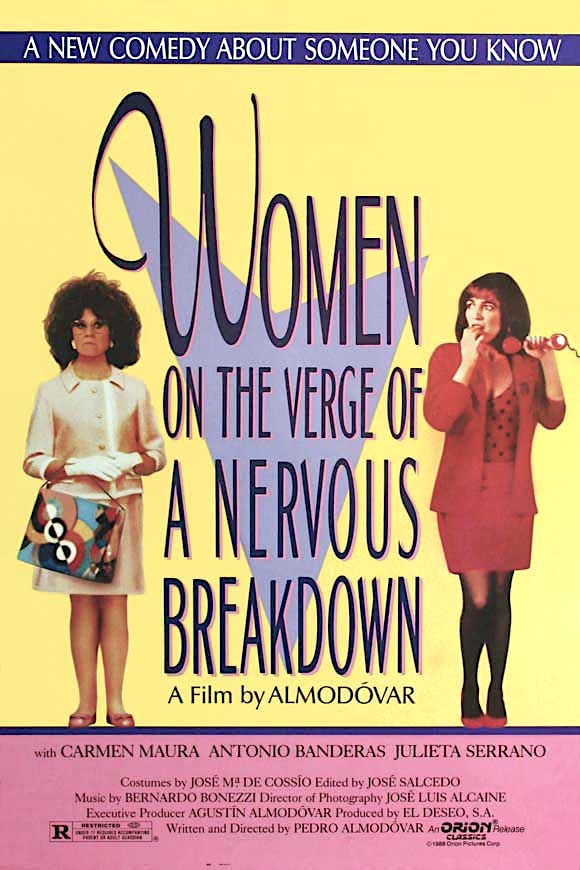 Los Angeles, CA (The Hollywood Times) 4/4/22 – Saturday, April 2, at the Motion Picture Academy Museum was the first of a series of films in a retrospective of the work of Pedro Almodóvar, Spain’s most visible contemporary director. The series opened with Women on the Verge of a Nervous Breakdown (Mujeres al borde de un ataquede nervios, 1988). This grand tapestry of melodrama and farce typifies many of the films at the earlier stage of Almodóvar’s career as a director. The absurd comedy was an international hit, winning multiple Spanish Goya Awards and garnering an Academy Award nomination. As are many of Almodóvar’s films, this one is partially set in the world of filmmaking, though that is merely a backdrop to this wild ride of a manic romantic dramedy, which easily lives up to the promise of its title. Carmen Maura, an early muse of the director, plays actress Pepa, who wakes up to discover that her lover, the older charmer Iván (also an actor) has left her for another woman (or so she suspects).

Meanwhile, Iván’s ex-wife, Lucía (Julieta Serrano), has just been released from the mental institution where she has been living since he left her, years ago. As Pepa and Lucía each try desperately to find Iván, they interact with a colorful cast of characters that includes Lucía’s son (with Iván), Carlos (a young, pre-Hollywood Antonio Banderas); Carlos’ emotionally reserved fiancée Marisa (Rossy de Palma); and Pepa’s friend Candela (María Barranco), whose recent sexual encounter with a handsome terrorist further complicates matters (as does her reciprocated attraction to Carlos).

Television actress Pepa (Carmen Maura) is desperate because her boyfriend Iván (Fernando Guillén), who dumped her via answering machine message, is about to fly to Stockholm with a new girlfriend. At any cost, Pepa must track him down to deliver a message: she’s pregnant. Along the way, hilarious and mind-boggling events and characters enter and muddy the picture: Pepa’s close friend Candela (María Barranco) might have gotten herself involved in a terrorist plot; a real estate agent sends Iván’s son Carlos (Antonio Banderas) to check out Pepa’s apartment; Carlos’s girlfriend Marisa (Rossy de Palma) accidentally downs a pitcher of substance-infused gazpacho; and a taxi driver with a passion for mambo and kitschy décor keeps appearing to give Pepa a ride. Is it possible to avoid a nervous breakdown with all the madness spiraling out of control and context?

For Women on the Verge, the substance of genre is just as important as the mechanics of the narrative itself. Pepa (Carmen Maura) is a voice-over artist who has been unceremoniously dumped by co-star Ivan (Fernando Guillén) for another anonymous woman, an event that sends her more than a little out of control. Doubly troubled by the revelation that Ivan is the father of her unborn child, Pepa succumbs to the outward trappings of the frantic female: lighting her bed on fire, blending a bottle full of barbiturates into a pitcher of gazpacho, and, stricken by its emotional residue, putting her plush apartment up for rent. And yet she always manages to stop short of full hysteria.

While enamored of the idea to torch her love-nest, she’s shocked when it comes to dealing with the actual fact of a burning bed; the spiked soup, instead of being downed in a drastic suicide attempt, is, on second thought, stored in the fridge. Instead of going crazy, the world becomes deranged around her: her friend Candela (María Barranco) seeks asylum from the cops after realizing that her boyfriend is a Shiite terrorist; Carlos (Antonio Banderas, bespectacled and boasting a coiff no doubt inspired by the members of Color Me Badd) and his rather mannish fiancée Marisa (Rossy de Palma) stop by to view the apartment and somehow never leave; and Ivan’s sometime asylum-bound wife Lucia (Julieta Serrano) shows up, gun in hand, to exact revenge on Pepa and/or her husband.

Breathlessly paced and overfull with chance encounters, outlandishly oblivious characters, and a solipsistic universe populated only by a handful of people (Pepa hails a cab three times and thrice is picked up by the same effeminate driver (an Almodóvar look-alike); the lawyer she solicits for Candela’s defense just so happens to be having an affair with Ivan), Women on the Verge is above all a farce, but just as Pepa and Candela seem on the precipice of succumbing to their own neuroses, the entire drama itself seems to be on the razor’s edge of tipping over into melodrama.

Pepa is desperately trying to reach Ivan, but she is unable to do so even on the phone. In a way similar to Jean Cocteau’s play Human Voice, which is one of the inspirations for the film, we never get the full dialogue between this couple. The other side of the conversation exists, but usually only as a recording. The conversations are only possible via voicemail machine – Ivan leaves a message, Pepa replies as if he could hear her, then Pepa leaves a message waiting in vain for Ivan to call. As a result of Pepa’s frustration, the red phone is being broken repeatedly, and the voicemail machine is thrown out of the window.

Pepa and Ivan both are voice-over artists. This is how Pepa and Ivan interact throughout the film. They constantly miss each other, the dialogue never takes place, they don’t meet until the final scene when it’s already too late. The film Pepa and Ivan are dubbing is the 1954 film Johnny Guitar, more precisely we see a scene where Johnny is asking Vienna to lie by telling him that she always loved him and was waiting for him all those years. She says it, so does Pepa with tears in her eyes and collapses. In both cases, probably the most heartbreaking is that they are not lying. They are, in fact, pretending to be pretending.

Small surprise then, that the ur-text hanging umbrella-like over the film is Johnny Guitar. Pepa and Ivan, dubbed the voices of Joan Crawford and William Holden, respectively, for the Spanish version of Ray’s film. Pepa meditatively returns to memories of performing the voiceover at critical junctures, often at the nadir of her heartache. Crawford’s character, clearly wounded and slightly broken by Holden’s departure (and subsequent return) despite a stubborn lacquer of defiant indifference thus serves as a way for Pepa to exorcise her longing for Ivan—a cautionary tale about being in thrall to any man. Johnny Guitar therefore informs Women on the Verge, not in any deterministic or strict correlative sense as did All About Eve for All About My Mother, but as a template of the tragic direction that the film could potentially take. The only reason the film doesn’t devolve into full-bore tragedy is Almodóvar’s hand palpably intervening in the action, breaking up his own narrative through unmotivated random meetings, visitors at the front door, and interruptive phone calls.

While the difference between comedy and tragedy may have to do with timing, the difference between farce and melodrama is time. The former involves the coordination of events, the near-misses and lapses of information that sends protagonists to their deaths in Elizabethan tragedy; the latter is concerned with duration. Melodrama is about pushing a scene to its breaking point, and then pushing past it such that the characters achieve catharsis, transcendence, or both. Thus, the mode of Mildred Pierce or Humoresque requires duration to afford Joan Crawford the time to reach those heightened breaking points. Because Almodóvar’s film is about women only on the verge of nervous breakdowns (note the grammatical slippage in the film’s title, as though one communal, colossal breaking of the psyche is imminent for all the women involved) without the showing actual breakages themselves, there’s an implicit agreement between the director and his subject that he’ll always step in before the proceedings to become too burdensome.

Almodóvar senses when his material has reached its breaking point, and finally releases the reins, climaxing in a flurry of gazpacho-drugged cops and a moped chase, leading to Pepa’s final, for a lack of a better word, “redemption” – though a better term is needed, because she renounces her man without really having to sacrifice her dignity. At one critical juncture, Pepa voices her predicament: “Don’t call me a pain! I’m feeling very vulnerable.” By giving her emotional state a verbal habitation and a name, she makes her grief intellectual and sensible, rather than performative and excessive, after the mode of traditional melodramatic heroines. In short, Almodóvar’s manipulation of genre makes Women on the Verge one of most perceptive deconstructions of melodrama ever produced.

As a frothy creature of whimsy and caprice, Women on the Verge is unique in the director’s oeuvre, and yet it remains quintessentially an Almodóvar film. There are latent obsessions with post-WWII ideas of feminine beauty – overtly played out in the 1950s advertisements of beatific housewives, and more subtly manifested in Lucia’s anachronistic beehive wig – and with the complicated parameters of feminine relationships – particularly between friends and romantic rivals. The other potential interactions, namely mother to daughter and other domestically-inflected relationships are precluded because of the way José Luis Alcaine photographs domestic space. Using a wide-angle lens, Alcaine shoots household objects in hyperbolic close-ups such that they fill the frame, while the background telescopes sharply away from the foreground.

Elsewhere in the apartment, the camera focuses in tight on Pepa’s feet as she stalks back and forth across a set of wide, depressed steps; the screen’s vertical dimension is fragmented by a series of horizontal lines. Constructed in this fashion (and subsequently set on fire, etc.), the apartment, standing as a synecdoche for all domestic space (and indeed the only dwelling in which characters spend any significant amount of time), is simply uninhabitable, and therefore not liable to meaningful relationships. And as befits an Almodóvar film, Women on the Verge is utterly devoid of traditionally masculine males of any consequence. Carlos is bespectacled and dominated by his more manly beau, the ubiquitous taxi driver is a repository of feminine stereotypes – all the way from hair-trigger weepiness to an obsession with hygiene products – and Ivan is a philanderer and a coward, too afraid of confronting Pepa even to collect his belongings: He is a spectre, scarcely glimpsed and most notable for his absence. Sketching out three archetypes of woefully insufficient males, Almodóvar neatly undermines the idea that a kiss from any man is potent enough to induce hysteria.

As the title hints, Pepa is not the only woman in this film on the verge of the nervous breakdown. There is Lucia (Julieta Serrano), Ivan’s ex-wife whom he left when she was pregnant and was eventually put in a mental facility after giving birth to their son, Carlos. But recently, after recognizing Ivan’s voice on TV, she remembered him, pretended to be cured so that the doctors would release her. Though, as she admits, she’s not cured at all. Pedro Almodóvar’s film Women on the Verge of the Nervous Breakdown was released in 1988. If you are making a comedy about women’s nervous breakdowns or “ataque de nervios,” you have to walk a very thin line to look at a serious topic, and be funny, without hurting anyone’s feelings. Perhaps Spain of the post-Franco era was exactly where such a film was possible. People had just gained freedom from taboos and restrictions, as well as the seriousness of the Francoist regime.