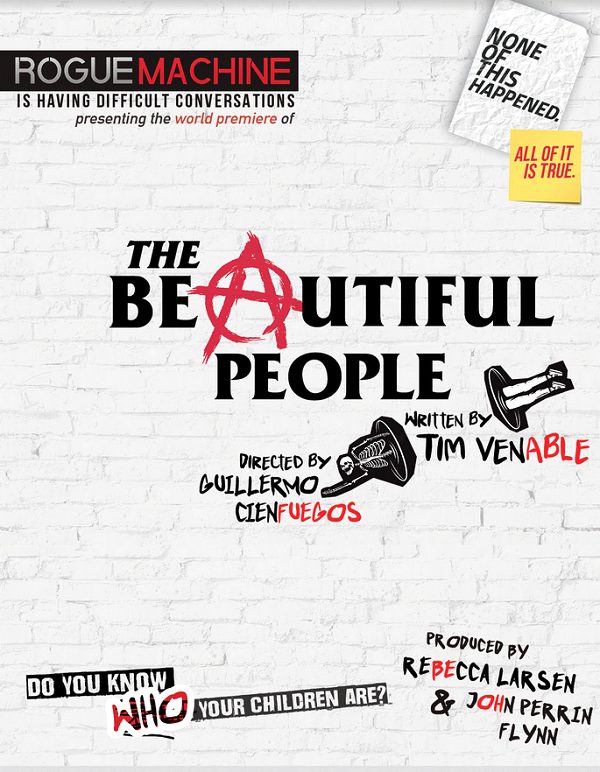 Opening Saturday, June 25 at the Matrix Theatre in West Hollywood is a new play presented by the Rogue Machine – The Beautiful People, written by Tim Venable and directed by Guillermo Cienfuegos.

The Beautiful People presents us with two 17-year-old male teenagers hanging out in the basement pad of a suburban home in the late 1990s. The boys are, more or less, best friends, and hang out together largely because they don’t feel that they fit into the main crowd at the local high school, where the jocks and pretty girls dominate the social scene. We first see the two teenagers, E and D, in the basement pad of E’s father’s house where E has made a comfortable space to hang out, play video games, and watch television. Inside the small theatre, the set takes over the space, transforming it into E’s basement hang-out, with the audience seated around on three sides, as virtual flies-on-the-wall in the conversations and antics of these two young men. While waiting for the play to begin, the audience can see and hear the images of late 1990s television on E’s television – and so establish the point in time where the story is placed.

It seems that E and D are used to spending time together and, as the play opens, E and D are playing a video game Doom, using Playstation or possibly Dreamcast. Doom is a first-person shooter video game that the two like. Although E is more interested in Doom than E, it turns out that E wins the video game match, leaving D upset. This leads to bickering and typical male insults, although the tenor of their words from the start are quite violent and full of homophobic slurs. They start pushing each other around in typical teenage male jousting. E is the bigger boy and uses his physical strength to intimate D, who knows how to move around fast and avoid getting hurt. Slowly the play begins to illuminate the characters of these boys who seem quite alienated from their classmates at the local high school. They brag about their interests in scoring with certain “hot” girls at school, but eventually it turns out that neither one has any real success in dating girls. Their swaggering braggadocio is mostly words about imagined sexual exploits and they revert to wrestling and chasing each other around the basement room.

More important is their angry commentary on current television as they channel-surf through late 1990s television shows, advertisements, and MTV music videos. They complain that most of the major big MTV favorites of the 1990s are “faggy” and “gay.” However, they agree that they both like the music of Marilyn Manson, whose song “The Beautiful People” serves as the title of the play. They playfully and somewhat sadistically mouth the words to Marilyn Manson’s song from his 1996 Antichrist Superstar album: “We would swoop down on the town / Kill everyone that wasn’t beautiful. / And I don’t want you and I don’t need you / Don’t bother to resist, or I’ll beat you. / It’s not your fault that you’re always wrong / The weak ones are there to justify the strong.” And so the “killing” theme is introduced but subtly in the play. Depending on one’s age and recollection of the late 1990’s music scene and the television fare of the era, the temporal references will register more easily for an older theater audience.

E teases D about his looks, his body and his clothes, but D tries to respond with typical teenage insults. The antics of the two boys in the room seem to be rougher than one expects for most teenage boys, as they seem to harbor much repressed anger. Their talk turns to killing and E brags about how his father, who served in the U.S. Army in Vietnam, enjoyed killing ordinary people during the war there in the 1960s. E’s father is a retired military officer, who E seems to hold in awe and fear. D seems quite impressed with E’s account of killing innocent civilians and their conversation turns to guns and killing. And the “gun” talk leads to another typical adolescent male anxiety about masculinity and penis size, channeling the Marilyn Manson song again: “It’s all relative to the size of your steeple / Capitalism has made it this way / Old-fashioned fascism will take it away.” This theme recurs in their night together, as the two keep talking indirectly about their sexual anxieties and panic over any implication of harboring “gay” tendencies.

D is obviously staying very late at Eric’s house so this evening turns into a sleep-over in E’s basement den. Watching MTV and chugging sodas, they decide to play a game of basketball with the small hoop and tiny ball that E has in his basement room. They spar but D outwits E and wins the game. E is a sore loser and takes it out on D in an aggressive, sadistic way. At this point in the play, the tone becomes darker and we begin to wonder what is their real game. Their conversation shifts to their feeling of being outside the social world of their high school classmates. It seems that they have been bullied at school, and E tends to bully D – even though he considers him a friend. It seems that E’s aggressiveness is partially fueled by medications that he takes. D complains of depression and sometimes of suicidal thoughts. Their relationship is definitely an odd one, created out of a sense of common purpose and, to quote from Marilyn Manson’s song, once again: “There’s no time to discriminate / Hate every motherfucker that’s in your way.” 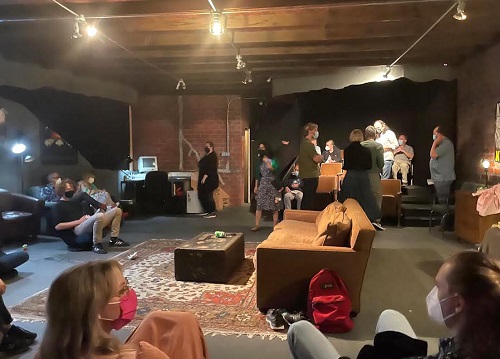 This is not much of a typical teenage sleep-over, but a prelude to something far more disturbing – as the last 10 minutes of the play unfold. As morning approaches on a typical school day for the boys, things shift dramatically. E gets up off his bed and D from the sofa. D changes his clothes and puts on a tee-shirt with the word “WRATH” on it; E also changes in black clothes with a shirt that reads “Natural Selection.” The haunting refrain of Marilyn Manson’s song “The Beautiful People” seems to take on a life of its own, in a destructive manifestation of the Nietzchean Will to Power as the play rushes to its grim conclusion.

The Beautiful People is a play that reserves its meaning and insight until the final moments on stage. As the playwright Tim Venable explains: “I felt like I knew these boys, that my friends and I weren’t that different. And, like me and my friends, they must have had fun. Were they into watching MTV, drinking soda, quoting movies, yet all the while they were harboring this terrible plan? I wanted to explore that duality.” Yes, the scenario we witness here is an imagined re-creation of the night before a terrible incident in the American experience that really happened. In this play, we try to understand how two teenage boys managed to join together on a mission that would prove tragically devastating. Psychologists try to explain behavior but too often the pieces do not easily fit together. Tim Venable’s play provides the pieces and we exit the theatre, wondering if we understand what we just witnessed.

Tim Venable (Playwright) is a Los Angeles playwright whose works include American Brutus (Son of Semele Ensemble – Solo Creation Festival), Crystal Gayle is a Beautiful Lady, Baby Foot, Jim; Or I’ll Be Smiling Forever. His play Handwriting (received a staged reading at The Road Theatre for the Summer Playwrights Festival and Shakespeare & Co., with a workshop performance done at the Mary Arrchie Theatre in Chicago. Screenplays include Singin’ the Blues (Finalist, ScreenCraft Drama Competition and Pretty Good Year. Tim has performed at Antaeus, A Noise Within, Shakespeare & Co., Portland Stage Company, Son of Semele Ensemble, The Road Theatre.

The actors are Alex Neher and Justin Preston. Alex Neher has previously appeared in Tambo and Bones (Center Theatre Group), John Proctor is the Villain (Ojai Playwright’s Conference), Shiner (NOLA Project) and in films and television shows including For All Mankind, The Sex Lives of College Girls, The Birch, 9-1-1: Lone Star, Gray’s Anatomy, and Inventing Anna. Justin Preston had his LA-theatre debut as Taplow in The Browning Version (Stage Scene LA Award for Acting); and performed as Young Lou in Julia (PRT), directed by Guillermo Cienfuegos. His other theatrical work has included The Indians are Coming to Dinner (PRT), Suburbia (PRT), 4000 Miles (PRT), and It Goes Like This (Marilyn Monroe Theatre).

Director Guillermo Cienfuegos is Co-Artistic Director at Rogue Machine (Matrix Theatre), where he helmed the productions of Dutch Masters, Ready Steady Yeti Go and Disposable Necessities. Cienfuegos has directed numerous productions at PRT, including Rhinoceros, The Homecoming, and Safe at Home: An Evening with Orson Bean.

Reservations: http://www.roguemachinetheatre.net or for more information 855-585-5185.