Los Angeles, CA (The Hollywood Times) 11/11/21 – The AFI Film Festival in Hollywood opened at Grauman’s Chinese Theatre in Hollywood on Wednesday, October 10 to a premiere of Tick Tick Boom, Lin-Manuel Miranda’s directorial debut of Jonathan Larson’s beloved stage piece. It’s been over 30 years since Jonathan Larson’s first performance of Tick Tick Boom a work he categorized as a rock monologue. Just a few years before his tragic and wholly unexpected passing (on the eve of the premiere of his seismic musical Rent), he channeled his anxieties into a show about struggling to write a generation-shifting piece of theater.

The center of the film is Jon Larson (played by Andrew Garfield), a young theater composer who is waiting tables at a New York City diner in 1990 while writing what he hopes will be the next great American musical. Days before he’s due to showcase his work in a make-or-break performance, Jon is feeling the pressure from everywhere: from his girlfriend Susan, who dreams of an artistic life beyond New York City; from his friend Michael, who has moved on from his dream to a life of financial security; amidst an artistic community ravaged by the AIDS epidemic.

In both halves, Andrew Garfield plays Larson – past and also present, circa 1992 – as a struggling artist on the doorstep of 30 and then as the composer on the verge of fame. The Larson on stage narrates a pivotal stretch in his artistic life, the New York workshop of Superbia, his de facto musical thesis project. Superbia is what he assumes will be his magnum opus. Still, it’s a high-concept futuristic space-set musical, a tough sell even before Jon hits the wall coming up with the show’s big emotional second-act solo. As the timer begins to run out before potential producers get a peek, the stress of prepping and finishing threatens his relationships with his girlfriend Susan (Alexandra Shipp) and best friend Michael (Robin de Jesús).

For those unfamiliar with the history behind it, the opening of Lin-Manuel Miranda’s new Netflix-bound film adaptation of Tick Tick Boom offers an overview (complete with a tongue-in-cheek disclaimer that lets the audience put their chosen amount of stress on the “semi” in “semiautobiographical”). While framing the action around a recreation (of sorts) of Larson’s original presentation, this Tick Tick Boom uses the freedom of a different medium to cut back and forth into the events that inspired those songs and stories. In some ways, Tick Tick Boom is the rare biopic written by its main subject. Yet for all its obsession with the nature of creativity – something the film attempts to capture but bungles.

Tick Tick Boom is naturally a time capsule of an era when “selling out” was a paramount concern – as Jon struggles to manage his own artistic insecurities, they start to merge with lofty rejections of materialism, and the whole thing starts to go in circles. Susan and Michael only exist in relation to Jon’s tunnel-vision ambition, and it’s not too hard to share their frustration as he grows more single-minded. Jon seems trapped by his own sense of solitude. Flanked by friends and neighbors alike, Jon is the center and the camera only seems to follow Jon. 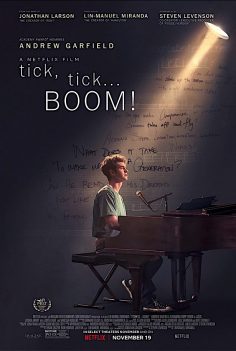 There was a post-screening conversation with director Lin-Manuel Miranda (Director), Andrew Garfield, Robin de Jesus, Alexandra Shipp, and Steven Levenson (screenwriter) moderated by filmmaker Rian Johnson. The film will be available in limited theaters on Friday, November 12 before streaming on Netflix on Friday, November 19.