Palm Springs, CA (The Hollywood Times) 12/16/18 – The holidays are the undisputed best time to receive a “major award.”  The Hollywood Times’ own Senior Editor, activist, and philanthropist, Valerie Milano was honored Saturday in Palm Springs with just such an award from the United Nations Association: Inland Empire Chapter.  In addition to owning a resident in the iconic luxury resort town, Milano lends both her service and her voice to a number of worthy causes. 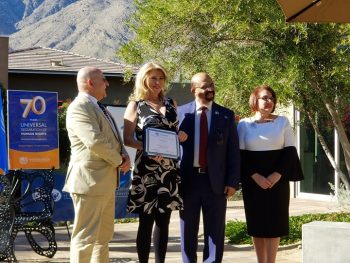 The Award was given to Milano at the 70th Anniversary of the Universal Declaration of Human Rights (UDHR) in a sunlit garden ceremony next door to the Will Cook and Robert Jan Morrison Estate.  The Guest Speaker was Ambassador of Peace, Environmentalist, and Author Leith Eaton.

Milano was given the Humanitarian Award, specifically “For upholding and celebrating the values of the Universal Declaration of Human Rights in the local community.”

Mayor Robert Moon thanked all those who had “worked very hard for human rights for all.”  He also issued an official declaration on what he called this “auspicious occasion.” 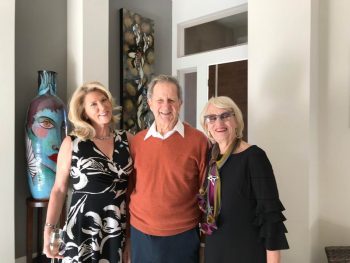 The declaration was made as Milano herself was honored as an outstanding contributor to these causes.  In addition to her work in Palm Springs with the Museum and Palm Springs Desert AIDS Project (Partners for Life), Ms. Milano has dedicated her time and energy to Human Rights Campaign (HRC) as a Fed Club Council Member, GLAAD, LAMBDA Legal, Outfest, Friends of Project 10, and NCLR.  She’s also a lay minsister and parishioner of the Blessed Sacrament Catholic Church in Hollywood.

She’s volunteered as a Board Member and was a chief organizer of the Television Critics Association twice-yearly press tours.  Milano works tirelessly, year round, on these causes, contributing her own time and finances and utilizing The Hollywood Times as a platform from which to promote them. 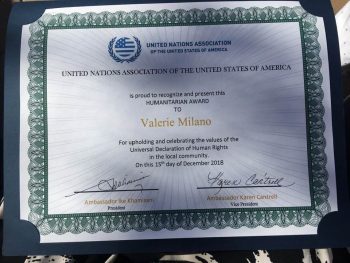 In other words, she frequently overshoots the mark when it comes to community advocacy.  This well-deserved honor officially placed her, once again, at the forefront of these movements.  And she’s just getting started.