Los Angeles, CA (The Hollywood Times) 9/28/21 – This is Jessica which premiered at this year’s OUTFEST 2021 in Los Angeles on August 15 at the Harmony Gold Preview House is Andrea Meyerson’s new documentary This is Jessica (83 min., 2021) about Jessica Bair, longtime LGBTQIA+ rights advocate with the Human Rights Campaign, as she shares her struggle to remain in her Mormon faith despite coming out as transgender.  The very popular documentary will be playing at Long Beach Q Fest film festival Oct. 30. The film screening of THIS IS JESSICA time TBD with a Q&A to follow.

Assigned male at birth in Utah, Jessica always knew she was a girl inside. Jessica fought to remain a Mormon, but the church still does not support LGBTQIA marriage or parenting; nor is there a place for women who had a transgender journey.  As Meyerson points out in an interview, the film focuses mainly on Jessica’s complex relationship to her religion as a Mormon.

From her earliest years, when Jessica Bair was being raised as a boy named Jonathan, she knew she was a girl. But born into the Church of the Latter Day Saints, she also knew that admitting this out loud could cause her to lose everything – her family, her faith, and, based on her Mormon beliefs, her life on earth and her eternal soul. Terrified to reveal her true self, young Jessica instead set about creating the perfect life of a young Mormon man, becoming a missionary, marrying young, and starting a family. As Jonathan, Jessica served in the U.S. Army for eight years, hiding from the Don’t Ask Don’t Tell policy even as she enforced it as a military policeman and special agent in Bosnia in the 1990s. But during the time, Jessica grew despondent about the chasm between who she was and who she was merely pretending to be. When Jonathan finally came out as Jessica, she had to deal with family rejection and feeling cast out of the church where she had always belonged.

Andrea Meyerson is an accomplished writer, director, and producer. In 2002, Andrea produced and directed the award-winning documentary Laughing Matters. The success of the critically acclaimed film spawned three award-winning sequels. To date, she has created twelve award-winning feature documentaries, all with the intention to educate, enlighten, and entertain. In 1995, Andrea founded Women On A Roll, one of the country’s largest social organizations for lesbians. Now in its 23rd year, the organization still offers worldwide travel and other unique opportunities for women. With the arrival of the COVID pandemic, Andrea has shifted to an online social experience for lesbians with Women On the Net. 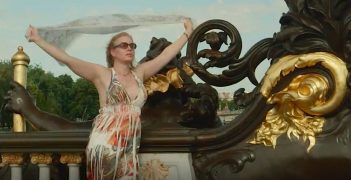