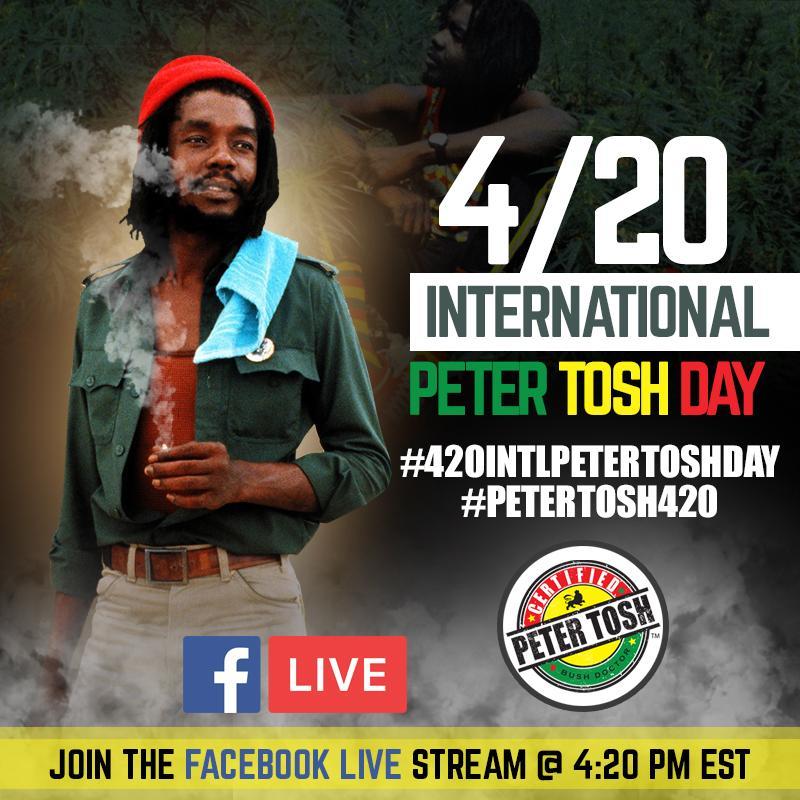 April, 2017 (New Kingston, Jamaica) — Having recently celebrated the 40th anniversary of his timeless classic “Legalize It” on the heels of the Peter Tosh Museum grand opening, fans worldwide are getting ready for “International Peter Tosh Day” on Thursday, April 20th, 2017!

Among the many acts who are planning tributes and messages of gratitude spreading the “Legalize It” movement worldwide; Tosh’s children and grandchildren including sons Andrew Tosh and Jawara “Tosh 1” McIntosh, grandson Dre Tosh, and granddaughter Jahzarah McIntosh have continued their father and grandfather’s legacy through music and advocacy.

Granddaughter Jahzarah, who will be participating in a Facebook LIVE stream to commemorate the third annual International Peter Tosh Day, recently had this to say on the upcoming celebration:

“I believe that it’s time that the world comes together and celebrates my grandfather Peter Tosh. Over 40 years ago, he released his iconic song and album Legalize It.  A song that became the anthem for those that believed that our human rights should NEVER be compromised. Join me and many others as we celebrate the musician, the activist, the revolutionary, and the visionary on April 20th,  International Peter Tosh Day by sharing your videos and photos with #petertosh420 and #420intlpetertoshday.”

International Peter Tosh Day will also be a day of recognition focused on Tosh’s contributions as a revolutionary musician in hopes that he will be considered for the 2018 class of Rock & Roll Hall of Fame Inductions and given the rightful honor he wholeheartedly deserves, with the continued #InductTosh movement spreading worldwide.

Additionally- Dre Tosh, who released a cover of “Comin’ In Hot” late last year in tribute to his grandfather, will be be going LIVE via Facebook continuing to spread the message of equal rights, cannabis legalization, and expansion of Jamaica’s worldwide cultural influence that Peter Tosh so passionately fought for.

Just last year, the Tosh Family announced the launch of the “Peter Tosh 420” cannabis brand, which will be launched in tandem with this year’s celebration! A company with a mission to organically grow the Peter Tosh legacy by providing quality cannabis products for medicinal power, spiritual enlightenment and recreational enjoyment- PT 420 will embrace the mind, body, and spiritual aspects of the cannabis culture. In addition, proceeds from every sale will be donated to the Peter Tosh Foundation to support education and social programs with an emphasis on social justice, cannabis legalization, and other humanitarian causes in Jamaica and around the world.

A self-taught multi-instrumentalist, Peter Tosh and The Wailers became pioneers of the burgeoning reggae scene in the late 1960’s, and together they toured the world for over ten years. He left the band in 1973 to pursue his solo career and earned huge success with “Legalize It” and later solo releases. He was tragically assassinated in his home in 1987 at the age of 42. In 1988, he was posthumously awarded a Grammy for Best Reggae Album for 1987’s “No Nuclear War”.

So this coming Thursday, April 20th celebrate International Peter Tosh Day via Facebook Live and join the Tosh Family, Estate, and countless others around the world in honoring the legacy of a true cultural icon!

For Info on the Launch of the Peter Tosh 420 Cannabis Brand, Check Out: http://petertosh.com/tosh420/

For More Information on Peter Tosh and His Legacy, Visit:

More About The Peter Tosh Museum:

The Peter Tosh legacy has been carried on into 2016/2017 with the grand opening of the Peter Tosh Museum at Pulse Center in Kingston, Jamaica. The Museum showcases personal artifacts including tour jackets, Tosh’s passports, telephone and radio, audio and video recordings featuring the superstar, as well as his famed M16 guitar and beloved unicycle- giving fans a fascinating and introspective look into the life of one of Jamaica’s most celebrated figures.