Los Angeles, CA (The Hollywood Times) 12/13/21 – Screening for a week at the Laemmle Monica Film Center in Santa Monica is Théo Court’s White on White (Blanco En Blanco, Chile, 2019), a challenging slow-burner that delivers a harrowing account of South America’s Tierra del Fuego at the end of the 19th century where European adventurers were clearing the land of the indigenous nomadic-hunter-Selk’nam people with brutal force. White on White won Théo Court the Best Director Award in the Orizzonti section of the 2019 Venice Film Festival and has been selected as Chile’s Oscar submission for Best International Feature Film at the 94th Academy Awards. 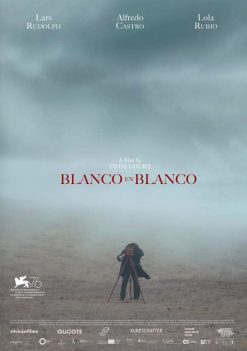 The barren landscape and extreme temperatures of Tierra del Fuego impose their photogenic quality from the first frames of the film. But the main character, a photographer named Pedro, hasn’t been called to aim his lens at this big country. A landowner, Mr. Porter, has asked him to come all the way to his isolated ranch to photograph his wedding. We see Pedro making his way to the house, treading on snow and following a couple of men and their dogs. We are at the turn of the 19th and 20th centuries. Once inside the house, the photographer clumsily plays with the curtains in the living room to try to let in more light. “Isn’t there a brighter room than this one?” he asks Aurora, the housekeeper (Lola Rubio). The answer is no. “Mr. Porter wants you to work here,” she says, setting the tone of the themes we’ll be confronted with. Not only will Pedro not find a brighter room; he will be on a journey into darkness, and he will be powerless to flee it or fight it.

The photographer Pedro is played by Alfredo Castro, who starred in Pablo Larraín’s Tony Manero and The Club. As an actor, Alfredo Castro is an expert in tuning despair and moral ambiguity to perfection on screen. Pedro looks uncomfortable from the start, and this extends to the film’s audience the minute the bride-to-be steps into the room: She is a little girl, Sara (Esther Vega), awkwardly coiffed and dressed beyond her age in a long white bridal gown. The photographer is equally sent off-balance, but not in the way you would expect. He decides to take the girl’s photograph in a fin-de-siècle sensual style, lusting over her while he carefully arranges the gown over her shoulders and overstepping several boundaries in the process.

It’s a credit to director Court that a scene like this is shot in a way that takes us to the core of White on White, providing a reflection on ethics and aesthetics. What we see is the representation of abuse, more than the stylization of it. This is true in relation to Pedro’s obsession with photographing the girl – echoing the controversy around some of Lewis Carroll’s portraits – as well as the portrayal of the ethnocide of the indigenous people of Tierra del Fuego. A second session arranged by Pedro features the nubile Sara in her white underwear on a white bear rug thrown over a chaise lounge, positioned much like Manet’s then-scandalous 1863 “Olympia” (though Sara is not naked and she’s not staring at the viewer).

The wedding that Pedro is supposed to photograph takes place much later than expected, almost at the end of the film, so the photographer – stuck in this forsaken, beautiful landscape – turns his lens to the people who work on the ranch and the later the indigenous Selk’nam people they have chosen to exterminate, those who inhabited the land before their arrival. Hunting and killing them seems to be the main job of Porter’s men. Pedro has a lingering and meticulous photoshoot with Sara that sets the tone for the photographer’s unhealthy attraction. Court captures this with a fly-on-the-wall intensity, with the darkened and decaying period interiors juxtaposing the beauty Pedro sees in the young bride. This quiet, unassuming visual style only adds to the slow-burn intensity of Blanco En Blanco.

Mr. Porter is an unseen omnipresence throughout the narrative. This land-grabbing adventurer is loosely based on Julius Popper, a Wallachian-born Romanian-Argentine engineer, and explorer who is known as the modern “conquistador” of Tierra del Fuego who one of the perpetrators of the genocide of the native Selk’nam people. Exploring the Southern Chilean lands surrounding Porter’s estate gives the events a small, simmering impact. These near inhospitable snow-covered rural locales dwarf the characters and bolster the eerie sense of isolation that plagues its inhabitants. This adds an uncomfortable sense of helplessness and unease to the proceedings – especially as the film dips into the violent male gaze and the maltreatment of indigenous women.

After Pedro’s indiscretion with Sara, Blanco En Blanco sees Pedro forced to document the activities of Porter’s men – where the photographer essentially becomes a party to native genocide “We want a record because we’re making history,” notes his employer’s henchman. Whilst tonally the film delves into horrifying new ground, it retains its quiet stylistically – slow pans, limited use of music (the noises of the weather adding to the sense of cold isolation), and sparing use of dialogue – yet still hits with a chilling, unsettling impact.

Alfredo Castro captures Pedro’s pained professionalism as a photographer who carefully stages his mise-en-scene for great photographs. Unable to leave the rural location, he brings his skill as a photographer to the most horrifying of tasks – documenting the murder of a Selk’nam tribe. If the history of photography has revealed anything, it is that photographers – even “documentary” photographers – are not neutral figures who capture “reality.” Dorothea Lange, of “Migrant Mother” Great-Depression-Era fame, carefully selected which of the woman’s children would be in the photo and which would not then arrange for Migrant Mother’s hand to rest thoughtfully on her cheek. Click. Among the film photographers who proved unable to resist involvement, consider L.B. Jeffries in Rear Window (1954) and Thomas in Blow-Up (1966).

Pedro is told he must “contribute,” in this case by documenting the civilizing mission that is changing this part of the world. His deepening involvement in the camp’s project (such as it is) is signaled in a series of photographs he takes of various groups of men with guns, and again when he is given his own rifle. The narrative around “winning” new territories and the legitimation of violence it entails have often been a rich subject in Western movies, with a debate around printing the legend or questioning it. Théo Court’s take on the topic is unequivocally clear, yet open to the audience’s imagination. Théo court is not preaching but still laying the darkness of the soul out in the open, making us think about how to look at its representation. The black-and-white photos of a pioneer photographer frame timeless brutality.