Hollywood, CA – The Odyssey Theatre, (The Hollywood Times) 07/01/2018 – It has been almost 50 years since the infamous Chappaquiddick incident – when Ted Kennedy drove his car off of a bridge into a tidal channel on Martha’s Vineyard – leaving passenger Mary Jo Kopechne behind – submerged underwater in the back seat of his 1967 Oldsmobile. The play centers on the night of this American tragedy with the end of both Ted Kennedy’s presidential aspirations and Mary Jo Kopechne’s young and talented life. She was a teacher, a campaign strategist, a secretary who worked for Robert Kennedy for four years – (she typed up his declaration to run for president) – who met with Ted Kennedy and others to mourn Robert Kennedy’s passing on that fateful night.

The World Premiere of writer, Peter Lefcourt’s The Death and Life of Mary Jo Kopechne opened at the Odyssey Theatre on June 30th and visits through August 12th. The play stars: Cathryn Dylan (Mary Jo Kopechne), Thomas Piper (Ted Kennedy), Blake Boyd (John Kennedy), Tim Redmond (Robert Kennedy) and James Gleason (Joseph Kennedy, Sr.). Peter Lefcourt, the playwright, states: “This play is an attempt to give her (Mary Jo) a voice and to restore to her, if only posthumously, the life that was so abruptly taken from he.”

The story begins with the entrance of a distraught Ted Kennedy coming into his hotel room at 2:30 AM terrified after leaving the scene of the accident and Mary Jo, behind. The party they left together – she left her keys and purse behind – was a reunion party for her fellow campaign workers, the “Boiler Room Girls.”  Soon his two dead brothers and his father appear to assist Ted in salvaging his career and the family name.

Director Terri Hanauer’s use of a TV set and hanging picture to show images – at first seems an intriguing choice in adding to the story – yet when the hanging picture displays images of a young Jackie Kennedy or Marilyn Monroe – becomes a distraction to Mary Jo’s story.

The set design and costumes are beautifully crafted and chosen. The actors are well cast yet the entire first half leaves the star of the show – for lack of a better word – hung out to dry as the dead political brothers banter, wrestle and (dad) remind us of historical tidbits while telling Ted how to get ahead of this latest Kennedy fiasco. 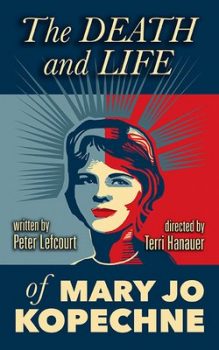 Mary Jo has two big moments – as Ted Kennedy and she verbally spar about the drinking they both did and the sexual encounter they’ve just had – he asks her why she didn’t say no. Mary Jo says, “I didn’t say yes and that should be enough.” The second is when she decides to return to the overturned car so that her body is found – forever ruining Ted Kennedy as a contender for presidency. It falls short of any depth. Neither moment has the emotional impact these characters need. Mary Jo seems more Marilyn than Ethel, and Ted doesn’t seem that bad of a guy – considering the circumstances. None of the characters do we get to know with a real and fresh perspective. Mary Jo’s memory should be honored and her intelligence, political life brought to the forefront or she’s just another blond having a few moments.

While the play is being touted as a past dilemma of today’s #MeToo era – along with the perils of working with men in power – the writer misses many opportunities to really engage us with Mary Jo or to know her more intimately through her own words and the Kennedy’s lack moments to fulfill. They are purveyors of information rather than living icons come to life on a mission! The men tell her not to return to her car so that Ted’s political career can go on and since Mary Jo’s “dead” she can choose not to. Mary Jo goes back. Again, not enough of her is presented in a way that makes this choice emanate heroic intentions.

Part realism part surrealistic in its tone – the play never decides in which place to remain. The bones are here – the meat and heart are missing.