Los Angeles, CA (The Hollywood Times) 11/12/21 – Screening at the AFI Film Festival in Hollywood on October 11 was Joachim Trier’s fine-tuned character study The Worst Person in the World, the third film in the Norwegian director’s Oslo Trilogy, following Reprise and Oslo, 31 August. This romantic dark comedy won actress Renate Reinsve the Best Actress prize at the Cannes Film Festival in 2021. The Worst Person in the World has been selected as Norway’s submission for Best International Feature Film at the 94th Academy Awards.   The film chronicles four years in the life of Julie (played by Renate Reinsve), a young woman who navigates the troubled waters of her love life and struggles to find her career path, leading her to take a realistic look at who she really is. Perceptively written, assembled, and beautifully performed by Reinsve and Anders Danielsen Lie (as Aksel) – as the man who could be Julie’s soulmate if she ever decided to have one – this widely accessible arthouse film attempts to address the confusion of people in their 30s today who find themselves in a boat similar to Julie’s. The Worst Person in the World has been acquired by Neon for distribution in North America and will be in theatres in February 2022.

In an interview, Joachim Trier was asked about why he wanted to make this kind of movie: “We wanted to go back to the more George Cukor-style of romantic comedies, and there are wonderful modern ones like When Harry Met Sally or Notting Hill, you know, the core tradition. Sometimes these films are not taken that seriously, but there can be an existential element to a love story. Love is the biggest life choice… that’s why we’re intrigued time and time again by love stories.”

The Worst Person in the World begins with an omniscient voiceover that talks us through various ill-fated or ill-considered impulses from Julie’s twenties with a hint of arch, amused contempt. She begins studying medicine, before deciding that psychology is her passion, sticking with that a short time before reinventing herself as a photographer; her romantic relationships, it seems, are similarly determined by whims and phases. You can practically hear the tutting conservative boomer op-eds in the background, venting against the children they raised with too few boundaries, the generation that just won’t stick at anything.

The story centers on Reinsve’s Julie, a spirited 30-year-old who has everything going for her. But she’s also experiencing growing disenchantment with a long-time serious boyfriend Aksel (Anders Danielsen Lie). At loose ends, Julie aimlessly wanders around the city on a beautiful summer evening and quietly crashes a wedding party in full progress. Encountering Eivind (Herbert Nordrum), they start flirting in funny intoxicated ways. But the good times begin to wane and with the passing of time and opportunities comes a sense of missed chances and mistakes resulting in a potent melancholy. Her complaint is: “I feel like a spectator in my own life. Like I’m playing a supporting role in my own life.”

The Worst Person in the World is told over 12 chapters – plus a prologue and an epilogue. That seems fitting for Julie as she ends up working at a local bookstore in Oslo while discovering what it means to be alive in the now, and the pros and cons of planning to not have a plan for her life. When serious aspects of adulthood come up, Julie’s excitement and lust for life deter her from these commitments. While some choices in her life are way past their expiration date, her hopes of achieving these new experiences could shed light on a new perspective.

Julie falls in love with Aksel (Anders Danielsen Lie), a semi-famous comic book artist. She becomes infatuated with his art and philosophy toward existence and respects and admires his every move. The comic book artist introduces Julie to his friends and parents, and she ultimately moves in with him. Their relationship is seemingly perfect; it’s a special and fruitful kind of love that rarely happens these days, one you can feel watching the film.

Yet the hovering, uncertain rhythm of her existence is precisely what draws 44-year-old comic book artist Aksel (Danielsen Lie) to her: Her “flakiness,” he says, pulls him out of his intense, self-oriented bouts of creative concentration. From the beginning, they acknowledge the 15-year age gap between them, but the longer they live together, the less their references to “bad timing” feel like a joke. Aksel would like a family, that biggest and least reversible of life decisions, while Julie isn’t just ready, but unconvinced she’ll ever want to be ready. “What has to happen first?” he asks her in frustration. “I don’t know,” she admits. “I need to do more first.” 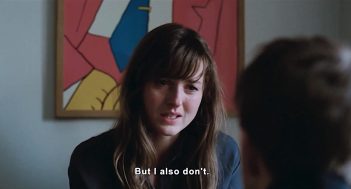 Perhaps it’s through Aksel that Trier speaks most directly: “I grew up in a time when culture was passed along through objects, and we could live among them,” he shrugs. “The Worst Person in the World” doesn’t dwell on hackneyed debates over the perils of living online, but it does ache for simple, tangible pleasures: the heat of touch and spontaneous human connection, and the luxury of stillness. In the film’s most rapturous set-piece, for several minutes, the world freezes around Julie as she saunters across Oslo to meet a lover, one of only two moving people in the world. The breeze teases the hair of petrified pedestrians as she skips past them, unbothered and elated. Just for once, for a brief, enchanted moment, time waits for Julie, and she has never been happier.