The novel that was published in 1983, by English author Susan Hill – was originally adapted for the stage in 1987 by Stephen Mallatratt’s production which opened in London’s West End in 1989. It still is being performed there – becoming the second longest-running non-musical play in West End history – after The Mousetrap.

It is stated that, “director Robin Herford recreates his original staging” in this gothic ghost tale that is set in early 20th century England. The play is structured as a play-within-a-play with a cast of two men – the young actor/teacher and the older gentleman who is haunted by his past. They agree to use more than storytelling to recreate the ghostly experience that has tortured the older character Arthur Kipps many years before. In the opening, the actor/teacher (Adam Wesley Brown) convinces Kipps (Bradley Armacost) to use the theatre to tell his story with the actor representing him as a young man.

The simplicity of the set evokes a chilling and gripping atmosphere ripe for all sorts of eerie things-to-come… and with exception of some great sound and stage smoke cues coupled with brilliant lighting – this play didn’t match up to the hype of the production. The second act granted us with more visual and atmospheric hopes – that at last we would be morphed into a cloud of feral shrieks. Herford’s direction is good but not remarkable and yet when the moments thrill – they truly are on point. We need more of these moments and perhaps that will come as the dust settles after opening night.

In the opening as Kipps tries to relay his tale and the actor coaches him with wonderful comedic moments between these two thespians as we wait for what is to come. And we wait… and we wait. The first act could be tightened or cut down or maybe it’s that it’s difficult to follow the story-

line – when Arthur Kipps goes from bad reader of his own story to a mimic of Laurence Oliver heights while emoting. The transitions are either too fast or beleaguered by dialogue that at times feels untrue of the actors. We get they’re acting it out, that they’re two people but at times it felt as if there was a disconnection between realities. It’s either too much “acting” or a bit of opening night jitters. The loss of innocence is swift with Mr. Kipps, while his counterpart, the “actor” displays too much rather than reveals.

The wait for the Woman in Black is what we do throughout the evening. Her lack of appearances is particularly frustrating when such remarkable images of a graveyard, haunted mansion, a child’s room, and a rocker that won’t stop – so effectively snatch our imagination and get us to hope again to be frightened or tortured at least. As London’s The Independent is quoted as saying, “The atmosphere is so charged-up that on more than one occasion the entire audience screamed in terror.” The Daily Mail said, “A nerve-shredding experience.” During this performance the audience offered themselves to be terrorized, we were on board – but it doesn’t happen frequently or profoundly enough to convincingly scare, intimidate or to conjure up a sleepless night afterwards! 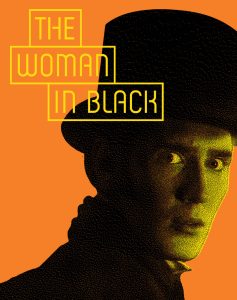 London’s The Woman in Black is a very tough act to follow – and hopefully – with some tightening up she’ll measure into her own screeching score because the skulls and bones are there – the witch’s brew is amiss. Perhaps some more eye of newt or a mix of mullein, toes of frog and graveyard dirt – or subtleties of The Woman in Black’s placed throughout the house or the even the loo. The ingredients are there for this highly anticipated haunted boo!

The history of this chiller was also released in the movies with the classic motion picture that starred Daniel Radcliffe in 2012 and is the highest grossing British thriller in 20 years.