Los Angeles, CA (The Hollywood Times) 11/6/21 – Screening at this year’s Asian World Film Festival in Los Angeles is a new film from the country of Namibia in Southwest Africa – The White Line (2021). It is the first feature film of Namibia director Desiree Kahikopo, an award-winning female director/producer from a country which gained its independence in 1990, after being considered part of the Republic of South Africa for most of the 20th century. Set in 1963, after the Old Location uprising that shook South West Africa, a black maid’s life is changed forever when she encounters an Afrikaner police officer on a routine passbook check. Their illicit love for each other grows over time through the letters they write to each other, and they endure many obstacles beyond the color of their skin. The White Line is an authentic Namibian story that shows how apartheid laws were extended to the territory of Namibia prior to independence, under the South African administration. This year’s Asian World Film Festival has included a number of films from Africa in its screenings at the Landmark Theatres in West Los Angeles. The White Line is Namibia’s first-ever Oscar submission for Best International Feature Film. 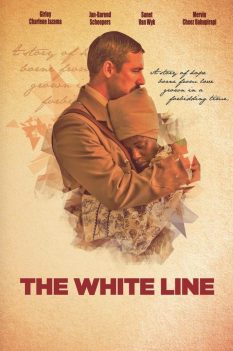 The White Line is a colonial romantic drama with strong acting and a powerful story. Director Kahikopo has created a beautiful love story that takes place during the apartheid era – a subject painful for mainly Namibians. Girley Jazama was brilliantly cast as Sylvia, the domestic worker at the house of a white Boer woman Anne-Marie de Wet. An anguished young woman, she lives with her younger sister and her ailing father in the Katutura Township near Windhoek in what was still South West Africa – in 1963. We learn that her father has never been the same since the death of his wife and Sylvia’s mother. Alongside Jazama, is Sylvia’s love interest, Afrikaner police officer Pieter de Wet, played by Jan-Barend Scheepers. The film shows potential for great romantic chemistry between Sylvia and Pieter, but Jazama and Pieter’s delivery for this seemed a little uncomfortable and forced at times. Pieter, being a sweet, nerdy (or nervous) guy, is open-minded and perhaps in desperate need of a soulmate or caretaker.

The posh, buzzkill of a woman, Anne-Marie de Wet (Sunet van Wyk) dominates the film. Van Wyk does justice to the character who is the essence of inherited racial prejudice – at least in the realm of The White Line. Anne-Marie uses the apartheid regime to her advantage to tower over Pieter and Silvia. Anne-Marie’s dominant personality gives her a lot of time to devise ways that put pressure on Pieter and Sylvia. She is the perfect antagonist, knowing what she wants and willing to go to any length to get it.

In an interview with actress, Girley Jazama talked about her acting in the film: “I am a method actor which means I aspire to complete identification with a part. The cast and crew all knew this. While I was on set my name was Sylvia and they treated me as Sylvia. You just focus on where you came from in the story and where you are going. All the while you remain in character.”  Apart from playing the role of an anguished black domestic worker who falls in love with her white employer during the apartheid era, Jazama has starred in films like Cries at Night (2010), Underneath the Sky (2016), 100 Bucks (2012) and Three and a Half Lives of Philip Wetu (2009). Jazama also acted in various theatre and television productions. In 2014 she was nominated for the best supporting actor at the 2014 Namibia Film and Theatre Awards for her role in Hafeni Muzanima’s theatre play, Revere Them Those Men her role as Divine Edison, a transgender woman.

The screenplay by Micheal Pulse is well-constructed, although the editing seems a bit rough. The film has a firm supporting cast who does justice to the sub-plots. The music, especially Pulse’s original song titled The White Line gives substance to the overall film.

Director Desiree Kahikopo, a graduate of the Durban School of Dramatic Arts, is an actress, performer, creative director as well as a playwright.

Namibia is a large country on the map and borders the Atlantic Ocean – marked by remarkable landscapes, huge desert areas, and sizable mineral wealth. Its population is only 4.5 million, the majority of people being of Bantu origin. Like most of the interior of Sub-Saharan Africa, Namibia was not extensively explored by Europeans until the 19th century. At that time traders and settlers came principally from Germany and Sweden. In the late 19th century, Dorsland Trekkers crossed the area on their way from the Transvaal to Angola. Some of them settled in Namibia instead of continuing their journey. Later Dutch Boer settlers from South Africa arrived in Namibia from 1874 to 1881, in search of political independence and better living conditions. Generally, they were socially conservative, fundamentalist Protestants in religion, and overt racists. They were able to establish large farms and ranches, exploiting the indigenous African population as workers.

Namibia became a German colony in 1884 under Bismarck to forestall perceived British encroachment and was known as German South West Africa. In a calculated punitive action by the German occupiers, government officials ordered the extinction of the natives in the OvaHerero and Namaqua genocide. In what has been called the “first genocide of the 20th century,” the Germans systematically killed 10,000 Nama (half the population) and approximately 65,000 Herero (about 80% of the population). Most Africans who were Bantus were confined to so-called native territories, which under South African rule after 1949 were turned into “homelands.” Some historians have speculated that the German genocide in Namibia was a model for the Nazis in the Holocaust.

As apartheid conditions worsened, South Africa troops tightened its grip on Namibia, which became a flash point in the Cold War in the 1960s and 1970s, as SWAPO, drawing on military aid from the Soviets, Cuba, and Angola, began a war of insurgency against South Africa. South Africa accepted Namibian independence in exchange for Cuban military withdrawal from the region in 1988 and in 1990 South African troops were removed from Namibia and the country had its first parliamentary elections in 1990. The Namibian Constitution was adopted in 1990, incorporating human rights and compensation for state expropriations of private property. Sam Nujoma was sworn in as the first President of Namibia at a ceremony attended by Nelson Mandela of South Africa (who had been released from prison the previous month in 1990). This film The White Line is framed by the announcement on television of Sam Nujoma’s election as president in 1990 and the reaction of a Boer couple in their home in Namibia, as they wonder what will happen to white people in the aftermath.