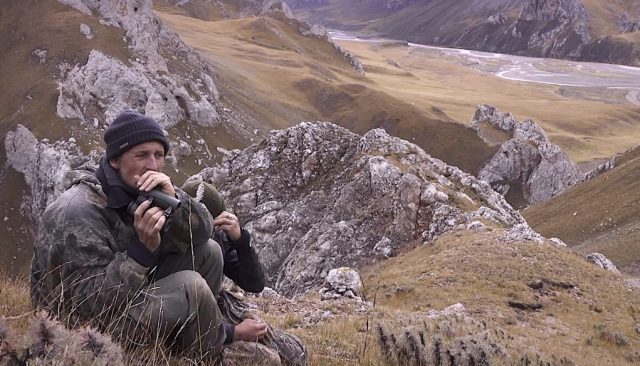 Los Angeles, CA (The Hollywood Times) 12/26/21 – Just opened at several Laemmle theatres in Los Angeles is a new documentary from director Marie Amiguet entitled The Velvet Queen (La panthère des neiges, France, 2021), about two men’s search for the rare snow leopard which inhabits the hinterlands of the Himalayas in Tibet. Part travelogue, part meditation, it’s a journey in search of the elusive Tibetan snow leopard, “the spirit of the mountain” high in the Himalayas, a quest guided by Vincent Munier, a life-long naturalist, and professional wildlife photographer. Accompanying him at 16,400 ft in subzero temperatures is globetrotter and writer Sylvain Tesson, who also narrates.

Recent nature documentaries have tended to be either solemn, sometimes almost mournful contemplations of non-human life or inspiring tales of an exceptional human’s symbiosis with nature. Marie Amiguet and Vincent Munier’s The Velvet Queen gives us a bit of both, combining patiently observed footage of animals living in their natural habitat with the story of two men seeking an escape to a prelapsarian state of being.

The Velvet Queen is about distance, in both literal and metaphorical terms: The space that the filmmakers have to keep between themselves and the wild animals that they observe, as well as the seemingly unfathomable distance between humans and animals. Using long, telephoto lenses, Muriel captures candid shots of herds and individual animals isolated amid the rusty browns of the Tibetan plateau and the craggy, gray mountains of the Himalayan mountains. In one of his most remarkable extreme shots, we only gradually realize that a moving herd of bovines are actually under attack from a pack of wolves. This serves as our introduction to merciless unpredictability of life in this relatively untouched area of the world. 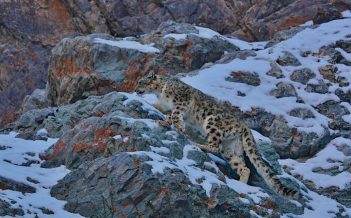 High up on the Tibetan plateau. Amongst unexplored and inaccessible valleys lies one of the last sanctuaries of the wild world, where rare and undiscovered fauna lives. Vincent Munier, one of the world’s most renowned wildlife photographers, takes the adventurer and novelist Sylvain Tesson (In the Forest of Siberia) with him on his latest mission. For several weeks, they explore these valleys searching for unique animals and try to spot the snow leopard, one of the rarest and most difficult big cats to approach.

The two venture into the wild, beautiful, yet daunting region “unmarked by human hand,” where the simple act of waiting is explored as a cure for the hysteria of modern society. A requiem for the call of the wild with breathtaking images, the film indulges in a lot of random philosophizing, painting a cynical picture of humanity’s plight. While the film’s synopsis suggests that the snow leopard features prominently, only a brief portion of the work captures the snow leopard. Stolen glimpses of other phantasmagorical creatures become rewards in themselves. We see the Bharal, the Pallas’s cat, and the Saker falcon. 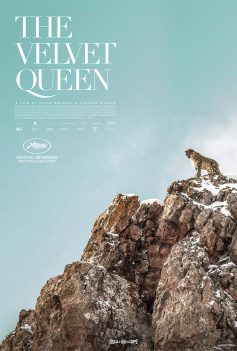 It may at first seem extreme, but an expedition through the Himalayas, in search of a near-mythical beast is a logical response that serves as a remedy to crisis or trauma, as was the case for an emotionally-wounded Tesson who was in desperate need of a reaffirmation of life. A leap of faith, many have unsuccessfully sought to break bread with the elusive creature. Like royalty, “no one is promised an encounter,” says Tesson. But he and Munier are determined, which means they must live amongst the wild, where they are at the mercy of the elements.

Each outing means remaining motionless and silent for hours while enduring brutal cold, and the thin air of high altitudes. Above all, avoiding detection is paramount. They aren’t on a hunt, but the chase is similar. The animals might not be immediately visible, hiding on the other side of rocks or inside tunnels they dug for themselves, but they are alert.

Tesson narrates in an almost stream-of-consciousness style, punctuated by poetic interjections, making observations leaning heavily on East Asian spirituality and stoic philosophies about life as torturous, the concept of dogged determination, to teachings from Hindu scripture about letting go of expectations beyond those you place on yourself. There’s a borderline misanthropic undercurrent in The Velvet Queen that implicates humanity’s increasing disconnect from nature as a leading factor in what Tesson believes is its downfall. And when he says, “Revere what is in front of us; hope for nothing; delight in what crops up; have faith in poetry; be content with the world; fight for it to remain,” he expresses the documentary’s conclusion in concentrated form.