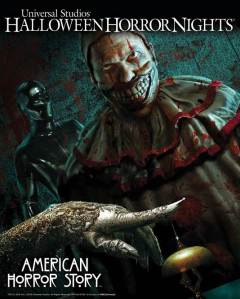 UNIVERSAL CITY, Calif., ORLANDO, Fla. (August 16, 2016) – One of the most horrifying and wickedly gruesome shows in television history is bleeding off the screen and into your nightmares.

Three chapters of “American Horror Story” will haunt the nation’s best, most intense Halloween event in all-new frightening mazes. Guests will embark on a terrifying journey to become the next doomed residents of Murder House from Installment 1, tortured performers in the disturbing and twisted Freak Show from Installment 4, and victims of the otherworldly, death-dealing Hotel from Installment 5.

For the first time ever, guests will venture through Ryan Murphy’s groundbreaking horror anthology, encountering a plethora of iconic scenes and memorable characters designed to jolt them to their very core.  Twisted scenes from Murder House will unleash the evil spirits that possess the Harmon estate, spiraling guests through decades of the tortured dead who previously resided there.  In Freak Show, guests will join a troupe of biological misfits in a sinister sideshow where they’ll be stalked by the murderous and deformed Twisty the Clown. Finally, guests will succumb to the warped desires of The Countess after checking in to the haunted Hotel Cortez, conceived from the beginning as a torture chamber for its customers.

“‘American Horror Story’ is one of the most disturbing television shows ever produced, and with such perverse storylines unfolding with each installment, ‘Halloween Horror Nights’ is undoubtedly the only place that could create a living version of the nightmares that Ryan Murphy dreams up,” said John Murdy, Creative Director at Universal Studios Hollywood and Executive Producer of “Halloween Horror Nights.” “Plus, as a fan favorite, ‘American Horror Story’ has been the number one requested maze from our guests and we’re excited to let them know that we listened to them and are bringing ‘American Horror Story’ to life.”

“‘American Horror Story’ is engaging for so many reasons, one of them being the fantastic way each installment of the series reveals completely new characters and stories for its viewers,” said Michael Aiello, Director of Entertainment Creative Development for Universal Orlando Resort. “It’s that constant evolution that makes this popular series a perfect fit for Halloween Horror Nights – and we can’t wait for our guests to experience some of the horror they’ve seen on the show.”

Universal Studios’ “Halloween Horror Nights” is the ultimate Halloween event. For more than 25 years, guests from around the world have visited “Halloween Horror Nights” in Orlando and Hollywood to become victims inside their own horror film. The streets of each coast’s event are transformed into highly-themed scare zones where menacing “scare-actors” lunge from every darkened corner. Multiple movie-quality haunted houses are erected throughout the event, based on anything from iconic slasher films to hit horror television series to haunting original stories.

Universal Studios Hollywood is The Entertainment Capital of L.A. and includes a full-day, movie-based theme park and Studio Tour. As a leading global entertainment destination, Universal Studios Hollywood delivers highly themed immersive lands that translate to real-life interpretations of iconic movie and television shows. Recent additions include “The Wizarding World of Harry Potter TM” which features a bustling Hogsmeade village and such critically-acclaimed rides as “Harry Potter and the Forbidden Journey” and “Flight of the Hippogriff™,” Universal Studios Hollywood’s first outdoor rollercoaster.  Other immersive lands include “Despicable Me Minion Mayhem” and “Super Silly Fun Land” as well as “Springfield,” hometown of America’s favorite TV family, located adjacent to the award-winning “The Simpsons RideTM.”  The world-renowned Studio Tour is Universal Studios Hollywood’s flagship attraction, inviting guests behind-the-scenes of the world’s biggest and busiest movie and television studio where they can also experience such authentic and immersive thrill rides as “Fast & Furious—Supercharged.”  The destination also features the Universal CityWalk entertainment, shopping and dining complex, including the Universal CityWalk Cinemas and the “5 Towers” state-of-the-art outdoor concert venue.

Universal Orlando’s two theme parks, Universal Studios Florida and Universal’s Islands of Adventure, are home to some of the world’s most exciting and innovative attractions. Its on-site resort hotels, Loews Portofino Bay Hotel, the Hard Rock Hotel, Loews Royal Pacific Resort, Universal’s Cabana Bay Beach Resort and the all-new Loews Sapphire Falls Resort, are destinations unto themselves. Its entertainment complex, Universal CityWalk, offers dining and entertainment for every member of the family.

GLAAD VIDEO INTERVIEW WITH BILLY PORTER ON UPCOMING MEMOIR UNPROTECTED: “THERE IS HEALING IN SHARING”