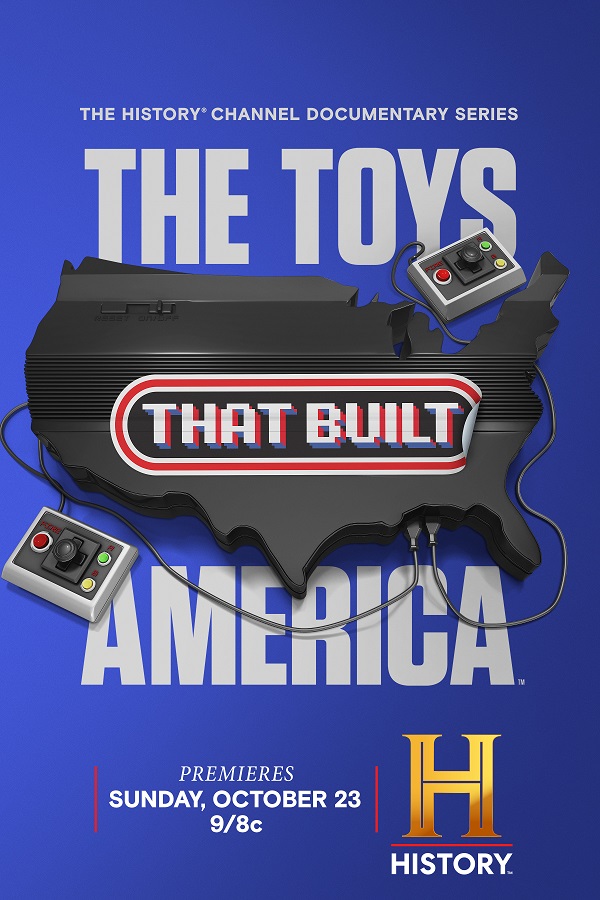 “The Toys That Built America” returns for a second season to continue chronicling the untold stories and rivalries that gave rise to the modern toy industry. The eight-episode season turns the lens on an exciting new selection of bold visionaries including video game pioneer Nolan Bushnell, toy innovator Marvin Glass and many other creators behind history’s biggest-selling games, puzzles, dolls, and action figures as they build billion-dollar empires against the backdrop of a changing world in the 20th century. Each one-hour episode is packed with nostalgic products, surprising historical connections, gripping dramatic tales, incredible technological breakthroughs and a treasure trove of unexpected facts.

If you missed Season 1, you need to go and check it out. Season 2 will bring back amazing memories for the late 70s and early 80s with a war between Mattel and Kenner and what movie brought on that war.  That episode will have you on the edge of your seat just staring at your television set without wanting to be interrupted!  Don’t miss it! Sunday, October 23 at 9/8C on The History Channel. Judy Shields, The Hollywood Times

Watch new episodes of “The Toys That Built America,” returning Sunday, October 23, and stay up to date on all of your favorite The HISTORY Channel shows at http://history.com/schedule.

#TheToysThatBuiltAmerica Subscribe for more from The Toys That Built America and other great The HISTORY Channel shows: http://histv.co/SubscribeHistoryYT

Watch more of The Toys That Built America on YouTube in this playlist: https://histv.co/TheToysThatBuiltAmerica

Against the backdrop of major events in American history like the Civil War and the Great Depression, “The Toys that Built America” shares a different story—one that brings new products and nostalgic toys to the forefront as driving forces behind untold cultural and economic shifts. The four-part docuseries showcases visionaries such as the Parker Brothers, Milton Bradley and Ruth Handler who transformed a small toy company into the billion-dollar empire now known as Mattel®. It reveals the little-known stories behind groundbreaking innovations like the Frisbee® and accidental discoveries like how the Slinky® was created. Additionally, the docuseries unveils competitive rivalries between iconic brands that changed the fabric of our nation forever. Blending dramatic reenactments and archival footage with interviews from experts, biographers, and others, “The Toys That Built America” brings to life the surprising tales of the men and women who created some of America’s most beloved and enduring toys, including Silly Putty®, Monopoly®, Barbie®, G.I. Joe®, and other famous classics. HISTORY® is the leading destination for award-winning original series and specials that connect viewers with history in an informative, immersive, and entertaining manner across all platforms. The network’s all-original programming slate features a roster of hit series, premium documentaries, and scripted event programming.

About The HISTORY® Channel
The HISTORY® Channel, a division of A+E Networks, is the premier destination for historical storytelling. From best-in-class documentary events, to a signature slate of industry leading nonfiction series and premium fact-based scripted programming, the HISTORY® channel serves as the most trustworthy source of informational entertainment in media. The HISTORY® channel has been named the #1 U.S. TV network in buzz for seven consecutive years by YouGov BrandIndex, and a top favorite TV network by Beta Research Corporation. For a deeper dive, visit history.com or follow @history on Instagram,  Twitter,  Facebook and YouTube.