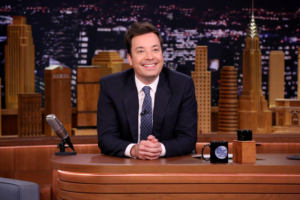 NEW YORK – Aug. 8, 2019 – In a late-night first, “The Tonight Show Starring Jimmy Fallon” is getting into the gridiron groove with five telecasts that will follow the fall’s most exciting sports event, NBC’s “Sunday Night Football.”

Guests for the telecast will include Jamie Foxx and Michael B. Jordan, who will share a clip of their new film, “Just Mercy.”  In addition, Kelly Clarkson will appear to discuss her latest project, the daytime series “The Kelly Clarkson Show,” and singer Kane Brown will perform.

Additionally, the show will broadcast an entire week live on Sept. 23-27, which is the opening week of the new fall season. Fallon recently hosted two live shows from its home studio at 30 Rock after the first Democratic presidential primary debates on June 26 and 27. Prior to that, live telecasts aired following Super Bowl LII and Super Bowl XLIX.

From Universal Television and Broadway Video, “The Tonight Show Starring Jimmy Fallon” is executive produced by Lorne Michaels and Jim Bell serves as Executive in Charge. The show is produced by Gerard Bradford and Jamie Granet-Bederman.

“The Tonight Show” tapes before a live studio audience from Studio 6B in 30 Rockefeller Center.