Stunning visuals and astounding effects will soon bring Ridley Scott’s THE TERROR, a speculative retelling of an actual two-ship Royal Naval expedition trying to find the Northwest Passage that went missing in the Arctic in the 1840s, to life on AMC.
On Saturday, January 13th a 2018 TCA Winter Press Tour panel convened at the Langham Hotel in Pasadena to discuss this innovative series.
Present were executive producers and co-showrunners David Kajganich and Soo Hugh along with cast members Jared Harris, Tobias Menzies, Nive Nielsen, and Adam Nagaitis.

Thanks to global warming, these two ships which had been lost in the Arctic for nearly 170 years were recently discovered!  Ten hours hardly seems like enough to tell this fascinating story based upon the best-selling book by Dan Simmons that Stephen King himself described as “a brilliant, massive combination of history and supernatural horror.”

In a way THE TERROR is a horror show with characters you care about being caught in an impossible situation.  They have to do what they cannot do!  And the most horrifying monster among them may be themselves.
So what happened to the 120 crew members missing from the two ships?  “They’re living in Palm Springs!” said Jared Harris to general laughter.

Try to guess where this Arctic adventure was filmed!  The surprising answer: Budapest.  In the Arctic, the cameras would have frozen on the spot.  The Croatian island of Pag doubled for King William Island.

“And we really drag the boats over those rocky islands,” said Jared Harris.  “Yeah.  Do it again!”
The claustrophobic shipboard spaces of THE TERROR make the show seem almost like a stage play.  “You develop a way of becoming private in public,” said Adam Nagaitis.  “You have to find a new space in your mind they can’t visit.”  Despite having to live in such close quarters, the cast of THE TERROR managed to have a great time pretending they were at summer camp.
Greenlandic singer/songwriter Nive Nielsen auditioned for THE TERROR while she was on tour in Europe!  She was glad to be cast as she is native Inuit who studied anthropology.  According to Soo Hugh, they did a global search for her role as Lady Silence since it was so important to find an Inuit actress. 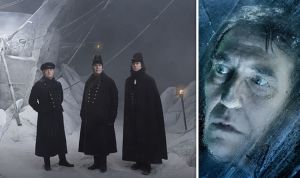 Other Inuit collaborators did their part to make the program seem as authentic as possible.  Its supernatural features are borrowed from Eskimo mythology.  The Inuktitut language agglutinates so heavily that one word can have at least 20 letters, making even transliterated line readings a real challenge.
http://www.amc.com/shows/the-terror/video-extras/season-01/episode-01/the-terror-sneak-peek-season-1-episode-1
In his 1851 mega-classic MOBY DICK, Herman Melville also spoke of the terror on the high seas.  For those who have yet to finish this literary masterpiece, THE TERROR may fill the bill.  Watch for it on AMC!