Review: Behind the Movement –

Los Angeles, CA, (The Hollywood Times) 2/2/2018–” It was reported that I was tired and that wasn’t true,” states Meta Golding as Rosa Parks in the TV One original film, Behind the Movement. “I was tired of all the injustice, all the fear and indignity that they were putting us through. That’s the truth.”

If you like movies that give you a behind the scenes look at what took place and how it all came together to bring about a historic life changing moment for a group of people, Behind the Movement, is a movie you will want to see. It shows the change that can come about in a short period of time when people come together and stand up for what they believe and know is right. 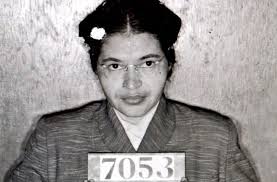 Debuting during Black History Month, TV One will air the original film, Behind the Movement. The film is an attempt to show what took place after Rosa Parks (Meta Golding – The Hunger Games) is arrested for her refusal to move to another part of the bus so that a white passenger could sit down. This was considered defiant behavior by whites in the southern state of Alabama during the 1950s. Parks’ arrest on December 1, 1955, is the final straw and is used as the starting point to strike back and insist on the fair treatment of “colored” people who made up 70% of the riders in Montgomery, Alabama. 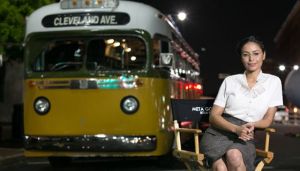 Meta Golding (Rosa Parks) plays the role well of a soft spoken, yet determined and convincing activist for change. Parks husband, Raymond, is played by Roger Guenveur Smith who does a good job of portraying her husband who is visibly and vocally concerned for the safety of his wife and their family members. 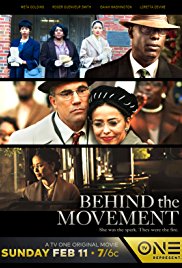 Isaiah Washington (E. D. Nixon) is forceful in his role as one of the major individuals instrumental in calling for a boycott of the Montgomery bus system and an end to the unjust laws that hold “colored” people in low regard.

Many actors have played the role of Dr. Martin Luther King, Jr., and have done a fine job. Shaun Clay’s portrayal of the legendary figure is definitely up to par with them all. Loretta Devine (Waiting to Exhale) does a good job of portraying Jo Ann Robinson the President of the Political Women’s Council  who with the permission of Rosa Parks, mimeographs over 52,000 handbills calling for a boycott of the Montgomery bus system.

A key point in the movie for me was the scene of Rosa Parks in a jail cell with another woman. The woman tells Parks she is in jail because of an abusive relationship and what she did to her abuser that landed her in jail. She profoundly states, “You just get to a point to where you can’t take it no mo’ and still go on feeling like yourself. I’d be free out there, but what’s that when a man beats on you day after day. I just figure some things are worth standing up for.”

To me this is the point of the film. To sit back and just allow injustice in any form to continue does more harm than good. The “colored” (black) people of Montgomery stood together and said, “This is worth standing up for. Our civil rights.”

Most of the  scenes are dimly lit setting the mood for the seriousness of the message of the film. This film will cause you to take a second look at things in your life and life in general, that you may not be taking a stand for to make any kind of a difference. Change comes when the decision is made to take a stand for what you believe in.

The flow of  the movie was some what slow at first but the pace picked up a bit as plans to organize the bus boycott began to unfold.

I recommend this film to historians, activists, and those who are interested in the behind the scenes events that took place to bring about the Montgomery Bus Boycott as well as the changes that took place as people banded together to call for change regarding the civil rights of black people in Montgomery, Alabama.

Film: Behind the Movement 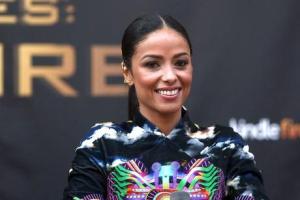