Hollywood, CA (The Hollywood Times) 10/27/16 – “my star number is 2,438, and the company I share my star with is Errol Flynn and Peter Falk and I would say that is great company.” Joe Mantegna told The Hollywood Times at The Hollywood Walk of Fame Honors Red Carpet event at the Taglyan Complex in Los Angeles on Tuesday.

Hollywood Walk of Fame Honors was filmed as a first-ever television event for the CW Network (to air on November 23 Mark your calendars!).  The inaugural event featured special celebrity tribute dinner, with special presentations, honoring the legendary legacy of the iconic stars who are on the world famous Hollywood Walk of Fame.  The event also celebrated the Hollywood Historic Trust and its efforts to promote and protect the Walk of Fame.

Mike Tyson was there dressed in a nice light blue suit and had a blast talking with the reporters as walked the red carpet.  He said he was glad to be part of the special night and looked forward to maybe receiving a star himself one day. He was asked who was he dressing up for Halloween  and he said “ME”. The Hollywood Times asked Mike Tyson if he was going to be on the next season of Dancing with the Stars and he shyly answered, “I’m not sure I’m cut out for that” and smiled.”

Check out our photos for the other celebrities that walked the red carpet.

The Hollywood Times caught up with Richard Sherman.  He was so happy to be part of the first-ever Hollywood Walk of Fame Honors that night and said he and his late brother Robert got their star back in 1976.  It was a great honor for the both of them to have received that honor.  We also talked about a movie he was in called “Pursuing Happiness” director by Adam Shell and Nicholas Kraft.  Over the course of nearly two years, Shell and Kraft put the pieces of the film together, from interviewing over a dozen experts in the fields of psychology, spirituality, mindfulness, and the arts, to going on the road to track down America’s happiest people and Richard Sherman was one of those happiest people.  Check out the link below for more about seeing Richard Sherman in the film.  http://pursuinghappiness.com/ 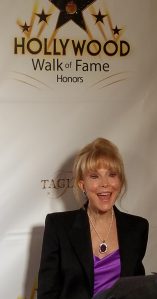 As a songwriting team, Robert B. Sherman and Richard M. Sherman are one of the most successful and honored in history. They have written more than 1,000 songs — for 50 movies alone — as well as for television, records, theme parks and the theater. The only songwriters to be put under contract by Walt Disney Studios, they became synonymous with its musicals — “Mary Poppins,” “Bedknobs and Broomsticks” and “The Jungle Book” among them.

A Star on the Hollywood Walk of Fame awarded to “Richard & Robert Sherman” on November 17, 1976, located at 6914 Hollywood Blvd.

About the Walk of Fame

On February 8, 1960, construction actually began on the long-planned Walk. The first star to be laid in the new Walk was that of Stanley Kramer on March 28, 1960, near the intersection of Hollywood and Gower. By that fall, work had progressed far enough that it was decided to dedicate the Walk on November 23, 1960, in conjunction with the Hollywood Christmas Parade. E.M. Stuart, as the originator of the idea, was appointed chair of the Completion Committee and planned the ceremony to mark completion of the project. The job was not actually completed until spring 1961, when it was finally accepted by the Board of Public Works, with the first 1,558 stars.

Shortly after completion, it was recognized that in order to continue the original intent of the program for the addition of more names in the vacant stars, a mechanism had to be created. On May 18, 1962, the Los Angeles City Council approved an ordinance that specified the Hollywood Chamber of Commerce should be the agent to advise the City in all matters pertaining to the addition of other names. The Chamber faced three tasks in moving forward: (1) to establish a set of rules to determine the qualifications of personalities to be eligible for addition to the Walk of Fame, (2) to work out a procedure to process candidates, and (3) to develop a plan for the financing of the costs of the addition of approved names. The task took several years, and it was not until December 11, 1968, that another star was added. Actor/comedian Danny Thomas hosted the momentous star unveiling for producer/studio executive Richard D. Zanuck in front of the world-famous Grauman’s Chinese Theatre. From this time forward, star ceremonies were held on a fairly regular basis. In 1972, Charlie Chaplin was finally awarded a star on the Walk of Fame. By May 21, 1975, when Carol Burnett received her honors, a total of 99 stars had been added to the original Walk.

Johnny Grant – In 1978, the Cultural Heritage Board of the City of Los Angeles designated the Hollywood Walk of Fame as Los Angeles Historic-Cultural Monument #194. However, all was not well with Hollywood and the Walk of Fame. By this period, the community of Hollywood had gone into a downward spiral of urban decay. The Chamber committee was having difficulty, under the circumstances, of sustaining the Walk of Fame at the same level as originally conceived. In 1980, the Chamber presented a star to entertainer Johnny Grant. Johnny became enthused about the honor and involved himself in creating a very memorable star ceremony. The Chamber was so impressed with his efforts, that they approached him about chairing the Walk of Fame Committee, which he accepted. From then, until his death in January 2008, Johnny’s name became synonymous with the Walk of Fame. His strong leadership built the Walk into an international icon. Under his leadership, a fifth category of “Live Theatre” was added in 1984 to allow persons who excelled in all types of live performance to be considered for stars. He also solved the problem of running out of space to add stars. When constructed, the Walk was designed to accommodate 2,518 stars. By the 1990s, space in the most popular areas was becoming difficult to find. To solve the problem, Johnny approved the creation of a second row of stars on the sidewalk, which would alternate with the existing stars. For more about Hollywood’s beloved honorary mayor Johnny Grant, go to: www.johnnygrant.com.

On February 1, 1994 (which was Hollywood’s birthday anniversary), the Walk of Fame was extended one block to the west from Sycamore to LaBrea on Hollywood Blvd. as part of a revitalization project by the Los Angeles Community Redevelopment Agency. Thirty stars were added to the block to create an instant attraction. At this time, Sophia Loren was honored with the 2,000th star on the Hollywood Walk of Fame.

Today, the Hollywood Chamber of Commerce continues to add stars to the Walk of Fame as the representative of the City of Los Angeles. An average of two stars are added to the Walk on a monthly basis. The Walk is a tribute to all of those who worked so hard to develop the concept and to maintain this world-class tourist attraction.