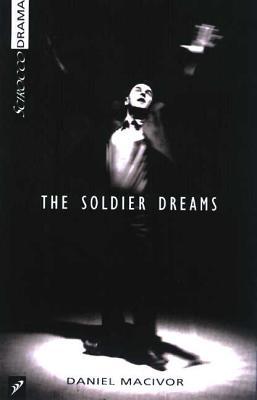 Los Angeles, CA (The Hollywood Times) 11/1/21 – Saturday night (October 30) was a performance of Daniel MacIvor’s play A Soldier Dreams at the Atwater Village Theatre in Los Angeles. The Open Fist Theatre Company has returned to live, in-person performance at Atwater Village Theatre with concurrent runs of two plays by celebrated Canadian playwright Daniel MacIvor, who wrote and staged the play in Toronto in 1997. I was there for the West Coast premiere of The Soldier Dreams, which has been scheduled for an eight-week run October 23 through December 12. Open Fist associate artistic director Amanda Weier has been a longtime fan of MacIvor’s unique voice as a playwright and chose to direct The Soldier Dreams and set the play in two locations simultaneously – a bed in an apartment in Toronto where a young man named David is dying of AIDS and various places in Ottawa where David once spent a night with a mysterious man who haunts his memory in his final days in a coma. This is a moving and well-performed piece by a cast that works together so very well.

As playwright Daniel MacIver explains, “The Soldier Dreams is a naturalistic dream play about the journey of a virus, its beginning in a love affair and its end in a family.” It is dark but also funny play – in its way of talking about the larger issues of life, death, loss, grief – and even dancing. Why dancing? Because, as we learn, David loved dancing in nightclubs. At the play opens, we see David lying in bed in a virus-induced coma, while his lover, Richard (Conor Lane), plays host to David’s family members (Amy Moorman, Scott Roberts, & Stevie-Jean Placek), each of whom feel they had the most special connection. In this poignant homage to those we love who have left us, the audience becomes witness to everyone’s – including David’s own – memories of David (Ethan Niven). “This is a piece about death that is the opposite of depressing,” says Weier. “We’re setting it in an old dance club from the 1990s, because David loved to dance. His dysfunctional family gathers in his waning days, sharing memories and trying to decipher the clues David has left for them.”

In staging The Soldier Dreams, Amanda Weier worked with the resident company of the Open Fist Theatre: “We talked and came to the conclusion that not only did the play still work its gentle magic of celebrating life as it dealt with the confusion and awfulness of death, it might in fact be something of a balm for our times as it doesn’t shy away from all that sucks about loss, but at the same time it reminds us that there is a kind of immortality made possible when we take time to connect and remember (and ‘dance and get remarkably drunk and fight…’) It is so very human to fear death and the unknowns about whatever might come next. What I love about this play is it allows for the possibility (probability?) that the beat goes on, somewhere, somehow.” 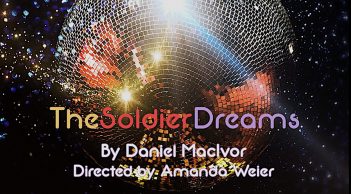 In her statement about the production, artistic director Amanda Weier offered these thoughts: “We chose to include The Soldier Dreams in our Winter 2021 season back in November of 2019. We felt it important to acknowledge and mark 40 years of dealing with the devastation of the AIDS epidemic, hoping the production might serve as a reminder and remembrance of all the gorgeous souls lost to (and still battling) that insidious disease. There were plans for talk-backs with leaders in the LGBTQIA+ community, with folks who’d been on the front lines of the battle in the 80s and 90s (this play was written and is set in 1997; I was in Chicago at the time, going to exactly the kind of dance clubs David and Judy both loved, and seeing for myself the toll AIDS was taking on my friends, especially those within our tight-knit theatre community.)”