Los Angeles, CA (The Hollywood Times) 8/19/21 – Tonight, August 19, at Outfest L.A. 2021 was the premier of Charles Busch’s The Sixth Reel (2021), a wild caper of film starring Busch as Jimmy, an Old Hollywood-obsessed New Yorker who is one a community of discerning and catty movie memorabilia collectors. This is the latest project of actor, playwright, writer/director (and drag legend) Charles Busch (Psycho Beach Party, Die, Mommie, Die!) who together with director/writer, creative partner and collaborator Carl Andress created The Sixth Reel. When the death of a close friend unearths the long-thought lost final reel of a classic Tod Browning horror film, Jimmy and his cohorts each concoct underhanded schemes involving false romances, drag personas and even vampires to cash in on a big sale of the film. Featuring memorable turns from Margaret Cho, Tim Daly, and Julie Halston, The Sixth Reel is equal parts salty and sweet, and an utter delight. We can think of no better way to celebrate a return to the movies than this celebration of unbridled – and sometimes unhinged – movie love! 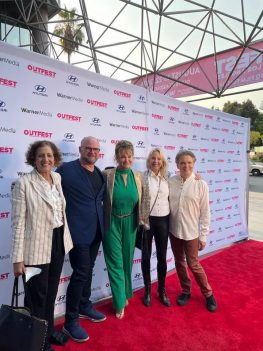 Of the film/filming, Busch and Andress say, “We’re delighted that such an incredible group of talented cast and crew have joined forces to bring this screwball caper comedy to life. This is how it must have felt on the studio lots back in the 1930s, when filming on sound stages was the norm.” Perhaps Charles Busch should have been born in the 1930s or 1940s, when glamor was what Hollywood movies were all about. In this, his second film, Busch and Andress turn camp into high art. Busch plays Jimmy and for much of the film, we see him in male clothing, not drag. His Jimmy is obsessed with old-Hollywood memorabilia: the more obscure the better. He’s barely making a living and is so behind in paying for his shabby rent-controlled Manhattan apartment that the Landlord is trying to evict him.

Much of his time is spent visiting old movie buffs. When one of them dies, Jimmy is happy enough to sort through the dead man’s jumbled apartment as there has always been a rumor that somewhere amongst all the trash there is a precious lost final reel of a classic Tod Browning horror film. Like every Busch project, this melodrama is obviously made with love as he is surrounded by a celebrated cast of actors he has worked with regularly. Each of them plays a scheming character desperate to get their hands on this ‘sixth reel’ as a matter of life and death so they can get rich quick. 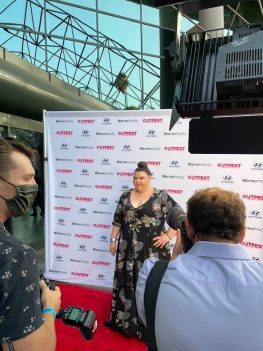 This all-star cast includes André De Shields as the bitter Gavin Plimsole, Margaret Cho as deadpan Doris the best memorabilia dealer in town, Tim Daly as Michael the aging gigolo who will sleep with anyone to get his hands on the film reel, Julie Halston as the dead man’s pushy niece, Patrick Page as the suave wealthy Mr. Beltrane who will save the day and Jimmy. All of them give over-the-top performances we would expect from them. We could never imagine Busch ever tell anyone to bring it down a level or two. The whole thing comes alive when Busch finally dons his drag and his femme fatale act in order to retrieve the film that he had found but had lost again.