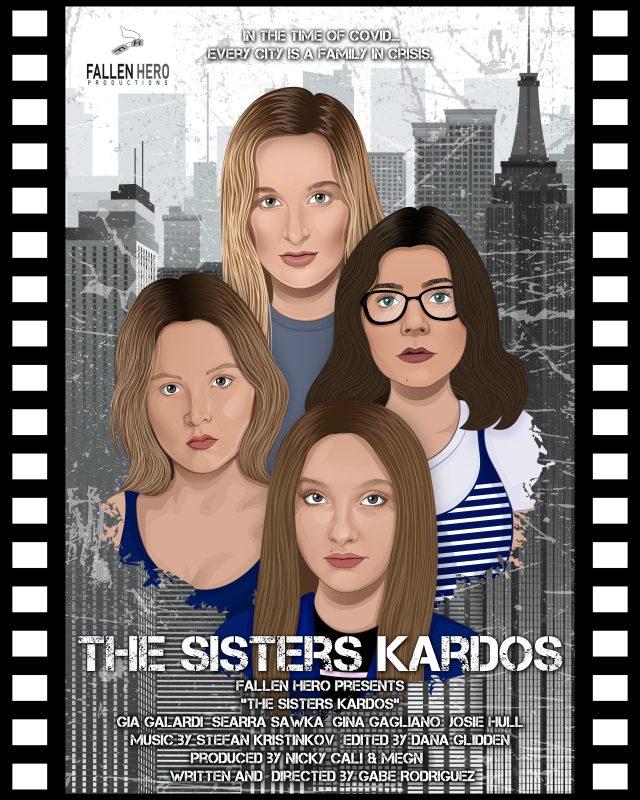 Los Angeles, California (The Hollywood Times) 5/06/2021 – The Kardos family is thrown into disarray when COVID-19 hits New York and the parents are quarantined in Italy. The four sisters, two of whom have different mothers, must figure out adulthood. The Sisters Kardos stars, Josie Hull, Gia Galardi, Searra Sawka, Gina Gagliano, and Eve Austin.

The Hollywood Times spoke with the director, Gabe Rodriguez, and actress Eve Austin who plays Sophie in the film.

Gabe, let’s talk about your work. Many of your films have strong female characters. Tell us about your award-winning film, Susie In the Afterlife.

Susie In the Afterlife was a short film made in 2010. It’s about a character who has died and finds herself in a conference room, where she must do a lot of paperwork and bureaucracy to get to Heaven. It was a very simple idea that I wrote with the intention of filming in the conference room in the office I was working in at the time. We filmed the entire movie in just six hours in one room, and it was very easy to edit. A year later it won the Spirit Award at The Queens World Film Festival. It was truly awe-inspiring that a no-budget film shot over six hours and edited in less than a week could be an award-winning film.

What is your philosophy behind your films?

My philosophy is that all cinema is an art and should be treated as such instead of as a business. Anyone should be given the opportunity to tell a story and try making a film. We get so caught up in the idea of the box office and labeling films as successes or failures that we often won’t take chances on creativity. I make films for storytelling, not for Capitalism.

One of my proudest moments was the making of one scene in Havana In Bushwick. One of the scenes features dialog in English, Spanish, and Russian. It was so rewarding to see the actors, despite not understanding every language, figure out their cues and how to react to the other’s dialog. Three different languages were being spoken, yet all the actors spoke a common language of mime. Watching that scene come together was a moment of pure cinema.

“Avenues to filmmaking should be open to everyone. Everyone should have the freedom to be an artist” We do not believe in the box office or in the practice of using financial performance to determine a film’s success or failure. Tell us about Fallen Hero Films and how these core values translate into your films.

The Fallen Hero website was created to be a hub where all indie filmmakers could submit their work and have it seen by a mass audience; the idea was a streaming platform for everyone. These core values translate into our films as they are made by the common person and promote themes of equality.

Tell us about The Sisters Kardos. What was your inspiration for the film?

When the pandemic first started, I locked myself away and took to working on my screenwriting, as I’m sure many other filmmakers did. However, I felt a disconnect; it felt strange to write any type of adventure or escapist story with all that was going on, especially when no one knew what the future of film distribution even was. Around May 2020, a new idea came: a story that was loosely based on Little Women, but set in the modern era of COVID-19.

Why this idea? I wouldn’t even say I’m the biggest fan of Little Women, but the story has always resonated. I owned a VHS copy of the 1940’s film version (with Elizabeth Taylor) when I was younger and while that’s not the best version, it was enough to leave an impact on me. The recent 2019 version, directed by Greta Gerwig, was also fresh in everyone’s mind. I had nothing new to say about the classic story or the era of the 1860s, but I had a lot to say about 2020.  And I wanted the film to be a love letter to New York.

So the idea was conceived, entitled The Sisters Kardos. I put a listing up on Backstage, giving actresses early drafts of scenes or asking them to improvise. The dynamic of the four sisters came from this casting process, and I narrowed down the four leads before a script was even finished. And as June came and the murder of George Floyd and stories of national unrest spread, suddenly the story I wanted to tell expanded in scope. This would be a story about what was happening right now, and the traumas of the Kardos family would parallel the societal ills of 2020.

The entire cast was very talented. Eve Austin, who plays Sophie, was an absolute professional and someone who always had a strong connection with her character, right down to what she wore every single day. The character of Lucy was originally written to be a middle-sister, but Josie Hull’s audition was so strong that she was changed to the youngest just to include her. Gia Galardi also originally auditioned for Lucy, but her performance was so jaded and embittered that the role of Carolyn almost immediately wrote itself!

By July the script was finished, by August it was being critiqued by beta readers and the feedback was very good. As September arrived, I debated if I really could make it. I had Zoom calls with the leads, asking them how they felt about filming during COVID. There were many valid concerns, but all of them believed in the project. Two days before filming started, I still was not sure I really was going to do it. Finally, I said “Let’s go into Day 1 and see if we make it to Day 2.” And soon we were on Day 21. Somehow, taking it day by day, we made a feature film in a month. 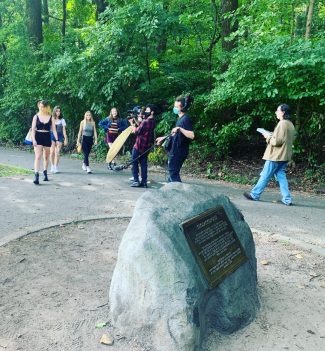 The fact we had little-to-no pre-production was both liberating and a challenge. It certainly came back to bite me several times, but it also just felt so good to be making a film again. Every day we filmed for a few hours, then sought locations for the next day. Crew members sometimes changed due to availability. My own mental state went from excitement to severe anxiety, but every day I told myself “The show must go on.”   Although there were many locations in the script, most were quite easy to film in: Central Park, Coney Island, apartments, office spaces, and restaurants that were rentable by the hour.

Gabe Rodriguez was born on September 11, 1984 in Secaucus, New Jersey, USA. He is a director and writer, known for Fighting Nirvana (2009), When the Amazons Folded and The Sisters Kardos.

Eve, What intrigued you about The Sisters Kardos?

The Sisters Kardos fit in perfectly with the times we are living in during COVID. A family saga with heart, wonderful well-defined characters, and great storytelling. A script like this is rare.

Tell us about your character Sophie

Sophie has the whole world in front of her when she meets her man. She does her duty as the mother of a blended family and takes care of her husband’s mistakes. She is imperfect. Gives more love to her own flesh and blood girls than the ones he brings into the marriage from other mothers. There is a dark and resentful side to her that she is not at liberty to express.

Life has given her lemons so she makes lemonade.

How did this role stretch your acting abilities?

All the roles I take on have the possibility of stretching me as an actress. I look for it. How can she have a deeper back story to influence the present?  All the women I play have flaws as in life and allowing them to be exposed stretches my abilities. The more complex, the better. 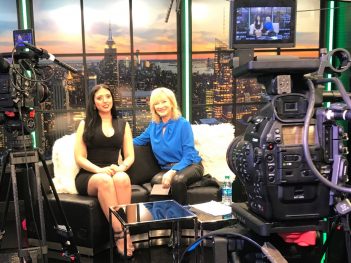 What did you learn from this project?

It proves that if you have a great, well-written story and gifted actors there are no limits to telling a universal truth that is both inspiring and relatable.

There were many great moments on set. I particularly enjoyed improvising with the amazing Josie Hull who plays my youngest and favorite daughter in the film. As I am a mom in life, it felt so real and true to have this conversation with my daughter in the film and revealed a lot of what makes us tick.

Rewriting the dramedy Lola Does Manhattan as a tv series. Thus far, Lola has won many awards from film festivals all over the world as a short. Audiences seem to love it.

The film A Sexual is going into pre-production soon. It will have a well-known cast as well as myself in it. It is the brainchild of Rob Margolies writer/director/producer for Different Duck Productions, with whom I am currently involved as a producer. Amazing this world we live in, I can act in NY, LA, Atlanta, or anywhere and produce for LA with my body in New York. We are so fortunate that the world has become smaller within our industry. I want to keep creating work that matters and touches audiences’ hearts.

-Check out my work on Amazon Prime and other On Demand platforms! Features: American Fango, All You Can Eat and Shorts: Joe, Fully Engaged.

-15 BEST ACTRESS WINS in 2020 Film Festivals for Lola Does Manhattan, Confidant, and Legit.