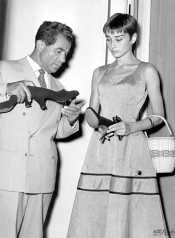 For years, Ferragamo had used this image in their shops without the consent of Miss Hepburn or her family. Following negotiations with the Hepburn Family in the mid 90s, their shops were redesigned globally and Ferragamo sponsored an Audrey Hepburn exhibition

‘A woman, the style’ to benefit the construction of a triborough appointed center for abused children at Hackensack Medical Center in New Jersey named after her.

Sean Hepburn Ferrer and Luca Dotti, as sons and sole heirs of the legendary actress Audrey Hepburn, as well as owners of the international trademarks “Audrey Hepburn”, promoted a legal action before the Court of Florence, Italy against the Salvatore Ferragamo SPA aimed at preventing any use of the name and registered trademarks of Audrey Hepburn, without their consent, with an order for the immediate removal of any combination of the same with respect to the products of the aforementioned Company, as well as to obtain the conviction of Salvatore Ferragamo Spa for compensatory damages, for violation by said Company of the rules of the civil code to protect both the name and the competition, as well as the Code of Industrial Property.

Messrs. Sean Hepburn Ferrer and Luca Dotti, assisted by the law firm of Avv. Jacopo Sani of Florence, believe that any unauthorized use of the name and / or trademark “Audrey Hepburn”, directly and / or indirectly aimed at the pursuit of commercial and / or marketing and / or advertising purposes, or ultimately that has as its purpose of the sale of goods, although through the recollection of historical episodes in the life of their mother, is unlawful and a source of serious damage, patrimonial and otherwise, which must be fully compensated.

“It is vital that each side respect the counterpart’s intellectual property rights” says Sean Hepburn Ferrer, Miss Hepburn’s eldest son, ” and I don’t think Ferragamo would let us use their brand as a reference if we engaged in the commercial exploitation of an ‘Audrey Hepburn’ ballerina of our own. This must stop. Luxury brands have to learn to respect the rights of legendary Hollywood icons just as they do their present day’s counterparts and for whom, I might add, they pay millions to”.