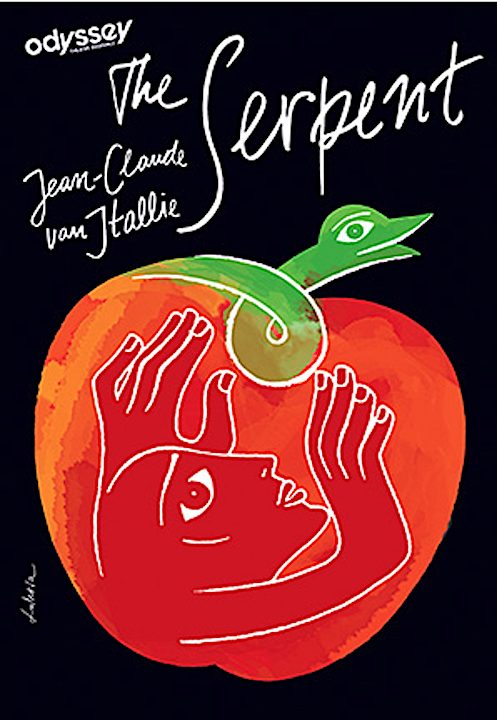 Los Angeles, CA (The Hollywood Times) 10/25/21 – October 23 was the opening night of a new production of Jean-Claude van Itallie’s The Serpent at the Odyssey Theatre in West Los Angeles. This Obie Award-winning work of experimental theatre was created by the Open Theatre ensemble in 1968 under the direction of Joseph Chaikin. Jean-Claude van Itallie’s ceremonial play, developed with the visionary Open Theatre, juxtaposes scenes from the Bible’s Book of Genesis with various modern experiences. Images of the Garden of Eden with Adam and Eve taking a bite from the forbidden fruit might occur alongside modern experiences, like Martin Luther King Jr.’s “I have a dream” speech.  The Serpent is an exploration of the origins and making of the myths and communal rituals humans have always used in their attempts to make sense of events, struggles, and catastrophes from ancient to contemporary times. The Odyssey Theatre’s production of The Serpent will run from October 24 through December 12.

Jean-Claude van Itallie wrote The Serpent (in collaboration with Joseph Chaikin’s Open Theater) in 1968, when anything seemed possible–especially revolution, both cultural and political. Experimental theater of the time was drunk with alternatives, eager to raise the consciousness of a young and angry generation desperate to rethink everything from the bottom up. It was also a year when a lot of dreams, right or wrong, died hard–in January, in the massive Tet offensive; in April, with the death of Martin Luther King Jr.; in May, in the streets of Paris; in June, with Robert Kennedy’s death; in July, at the Democratic convention in Chicago; and in August, in the streets of Prague. A whole new world of violence seemed to have been unleashed.

Inspired by Chaikin, van Itallie felt free to employ a host of unconventional theater techniques based on improvisation and mime. Out of this organic trial-and-error, show-and-tell process the Open actors created some potent metaphors, images that would reflect the outrageous nightmares, follies, and afflictions of Amerika: Hurrah (1966), a play that ran for two years in Off-Broadway. The actors use a variety of spellbinding techniques to give force to the work. These include rhythmic body movements, chanting, counter-pointed dialogue, and at times, almost hypnotic repetition. Ron Sossi, the award-winning director at the Odyssey Theatre chose to revive The Serpent in a very disciplined staging. Sossi had planned to stage The Serpent before the COVID pandemic closed down the Odyssey Theatre for almost two years. It was just last month in September 2021 that the news arrived that the playwright Van Itallie passed away at age 85 in the East Village.

The ambitious hour-long Serpent attempts to examine some serious questions: Why do people kill one another? Where does evil come from? Is any claim to innocence still possible in our contaminated world? Van Itallie’s strategy, such as it is, is to go back to the Bible. But characteristically his route is not direct. In Sossi’s production, twelve actors move freely around the stage, clad in smocks, and simple clothing. Then one actor recites a horrifying description of an autopsy accompanied by appropriate sound effects from the ensemble. This segues into a slow-motion reenactment of the JFK assassination, run both forward and backward until the violence comes to seem so ritualized it’s almost comical.

Reacting to this horror, the actors break formation, turning into frightened individuals who industriously distance themselves from evil: “I was not involved,” “I stay alive.” (Later another group offers similar testimony, also betraying a false detachment.) The Adam and Eve saga emerges from a sensuous love dance presumably depicting the pacifism of paradise (and resembling a Haight-Ashbury love-in or an excerpt from Hair). Six slithering actors create the play’s seductive title character of the Serpent, who introduces the First Couple to a lot more than sex. The terrible moment when God curses them, they discover their bodies and the fact that they will eventually age and die.

An equally protracted re-creation of the first murder follow: Cain believes that, if there is “no law and no judge,” everything is permitted. Van Itallie depicts this impulse killing as an even greater loss of innocence than the expulsion from paradise: Naively Cain breaks every bone in his brother’s body – and expects Abel to wake up as he always has before. This stylized murder was deftly performed by the actors. If, as one actor says, “Man created God to set limits on himself,” then judging by this play the restraint was insufficient. The Serpent ends with a tediously prolonged recitation of the interminable lineage of “begats” from the Old Testament.

At its best The Serpent reminds us of a plight we can’t escape; that we’re caught in the middle, neither as innocent as we pretend nor as guilty as association with such a foul planet suggests. So many choices have been made that we weren’t in on, and as the playwright points out most of us refuse to blame Adam and Eve or Cain and Abel. Fifty years after the play was written much of it seems like a naïve interpretation of our different and rapidly-changing world. For those who experienced the avant-garde theatre of the 60s and 70s, the aesthetics of Open Theatre will be slightly nostalgic. It may prove a harder sell for a younger audience who are used to the elaborate staging of performances with state-of-the-art lighting, sound, and sets.