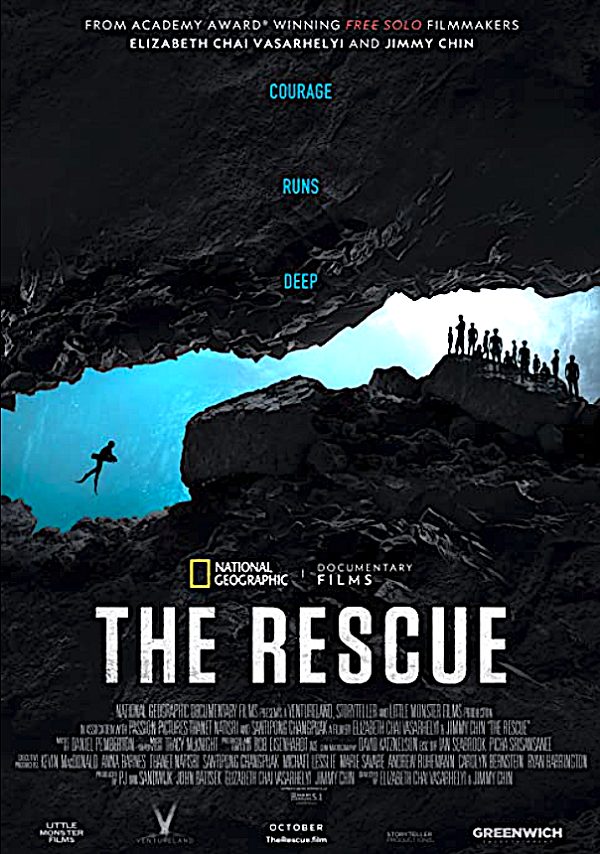 The Rescue is an arresting truth-is-stranger-than-fiction story of a Thai youth soccer team trapped in a remote flooded cave system opens on five screens in NY/LA/Chicago this weekend of October 8, 2021 – in Los Angeles, at the Landmark Theatres in West Los Angeles and at the AMC Theatres at The Grove in Mid-Wilshire. After premiering in film festivals at Telluride and Toronto, The Rescue has the distribution reach of National Geographic, as a Nat Geo film. At the Saturday screening, the directors Elizabeth Chai Vasahelyi and Jimmy Chin were present at a Q&A after the screening.

The Rescue chronicles the enthralling, against-all-odds story that transfixed the world in 2018: the daring rescue of twelve boys and their coach from deep inside a flooded cave in Northern Thailand. Using a wealth of never-before-seen material and exclusive interviews, Elizabeth Chai Vasarhelyi and Jimmy Chin keep viewers on the edge of their seats as they bring alive one of the most perilous and extraordinary rescues in modern times, shining a light on the high-risk world of cave diving, the astounding courage and compassion of the rescuers, and the shared humanity of the international community that united to save the boys.

Even viewers who closely followed the 2018 deliverance of 12 young school boys and their soccer coach from a flooded cave system in remote northern Thailand are likely to be transfixed by The Rescue, Elizabeth Chai Vasarhelyi and Jimmy Chin’s masterfully layered account of the operation. Even if the filmmakers had been present at the site during the 18 days that it took to locate and then retrieve the stranded cave explorers, they couldn’t possibly have filmed the team of international divers as they wriggled through narrow underground passageways filled with murky water. So the underwater scenes were reenacted with the original participants, lending the film a claustrophobic, verité immediacy.

Vasarhelyi, 42, and her husband, Jimmy Chin, 47, are best known for their Oscar-winning death-defying climbing documentary, Free Solo (2018). The duo had already spent three years painstakingly turning over every piece of video available to them for their new film: The Rescue, which opened October 8 in theatres. It tracks the 2018 global effort to retrieve 12 young soccer players and their 25-year-old coach trapped in the flooded Tham Luang cave in Chiang Rai Province, Thailand. The filmmakers had scoured international news feeds and local Thai footage, often piecing together scenes from a slew of disparate sources. What they couldn’t find, she and Chin and the British divers who led the rescue operation recreated in a tank in Pinewood Studios in London.

In their Q&A, Jimmy Chin said, “The process of this has been so intense. We do want to represent what was really important and we’ve been digging at this thing for three years trying to make it right.” What complicated Varsarhelyi and Chin’s efforts was a complex and convoluted grab for the life rights of the people involved in the rescue. Varsahelyi and Chin were initially attached to direct for Universal, which planned a dramatized version based on the soccer players’ stories. But rights to those stories disappeared after the Thai government got involved. Netflix then scooped them up and is currently shooting its own mini-series in Thailand.

Since Vasarhelyi and Chin did not have the boys’ rights, she was not permitted to interview them when she visited Thailand. However, she did share meals with some of them and learned more about their 18 days underground. She was taken by their role-playing exercises in which one child would pretend to be the parents so the others could recreate the families they were missing. What the boys were curious to see was the footage Vasarhelyi had of them being sedated by Dr. Richard Harris, an Australian anesthetist and cave diver who made the crucial – and controversial – decision to inject them with a mixture of Xanax, Ketamine and Atropine so they could be transported a mile underwater (about 2 ½ hours) without panicking.

With the British divers, the film’s producer P.J. van Sandwijk, was able to get the rights to their lives – one for the documentary and another for the upcoming feature film directed by Ron Howard. Then Varsarhelyi and Chin asked the British divers to come to Pinewood Studios in London to to re-enact the underwater scenes. “What we wanted to do all along when we started the documentary was to sort of demonstrate what we actually did and what we went through when we were rescuing the boys,” said Stanton, 60, a retired British firefighter and professional cave diver. They used exactly the same equipment as they did in Thailand.

They had completed most of the documentary, but Vasarhelyi felt something was missing. Those moments in the story where the rescue operation was in the hands of the Thai Navy Seals were in footage that belonged to the Thai military. In May 2020, Vasahelyi was able to make a trek to Phuket to meet with Rear Adm. Arpakorn Youkongkaew, a Royal Thai Seal commander and his wife, Sasivimon Youkongkaew, a former television journalist, who had the instinct to give the Navy Seals cameras at the beginning of what would become an 18-day rescue operation. After a long meeting, the Thai Navy agreed to let her use the footage from Youkongkaew and flew back to New York with 87 hours of footage in her backpack. This added 15 minutes of heart-stopping footage from the Seals and Thai army. That is how we can now see the divers Rick Stanton and jJohn emerging from the cave having found the boys as well as shots of hundreds of people lifting stretchers containing the boys out of the water.

Our principal guides for the adventure are two British cave divers, Rick Stanton and John Volanthen, interviewed individually after the events. They’re the ones who first discovered the lost boys and their coach on a ledge two miles into the caverns, where they had taken refuge after heavy rain submerged the route they’d followed into the grotto. The 13 couldn’t be rescued immediately, but the clock was ticking as the monsoon season loomed and the tunnels filled with water.

The filmmakers convey that sense of urgency by counting down the days while cutting between the operation and the divers’ intense but calm after-the-fact accounts. John Volanthen recently published his own account of the rescue operation in his Thirteen Lessons That Saved Thirteen Lives: The Thai Cave Rescue in July 2021 – a book that I have read and find most illuminating in terms of the interviewed footage in this documentary.

In one especially harrowing moment, Stanton and Volanthen discover four pump workers shortly into their journey, marooned just a short distance into the caverns. Rescuing those workers, who hadn’t even been reported missing, required only a brief period underwater but was challenging because the men panicked, and it became a kind of test run for the bigger challenge ahead. Had the four men not been discovered, the divers may never have realized in time that the kids and their coach couldn’t be transported while conscious.

Stanton and Volanthen enlisted fellow maverick divers to devise and execute a plan to retrieve the boys and coach, with assistance from Thai Navy SEALs, U.S. Special Forces, and many others. Chief among Stanton and Volanthen’s collaborators was Richard “Harry” Harris, an Australian diver and doctor who at first rejected the idea of sedating the 13 Thai boys – and then devised a three-drug cocktail to do just that. It worked, of course, but The Rescue chillingly demonstrates at various points that it’s a miracle that it did, between one child almost dying and the various breathing masks that barely fit over another one’s face.

The directors and ace editor Bob Eisenhardt deftly weave other people’s documentary footage, the reconstructed scenes, and interviews with the divers to build a gripping narrative. National Geographic Documentary Films is one of the production companies tied to The Rescue, and the documentary includes animated maps worthy of that magazine’s first-rate graphics. For viewers, the meandering cave system is clearly diagrammed.

Meanwhile below the surface, the divers struggle in darkness, sometimes losing their way as their oxygen supplies run dangerously low. (A former Thai SEAL did die of insufficient oxygen early in the operation.) The contrast between the mapmaker’s full knowledge of the caves and the divers’ hard-won, inch-by-inch discoveries underscores the latter’s bravery and determination.

John Volanthen especially remembers how he was told that he “doesn’t play well with others.” Cave diving is a solitary avocation, but when they needed to work together, the men did just fine. More than fine, in fact. Aside from being a thrilling account of a hair-raising rescue, Vasarhelyi and Chin’s documentary attests to living a calling.