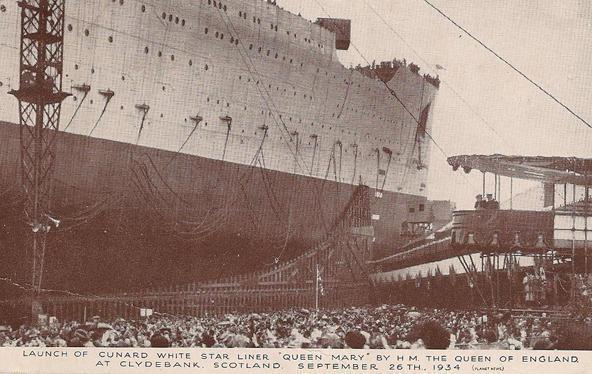 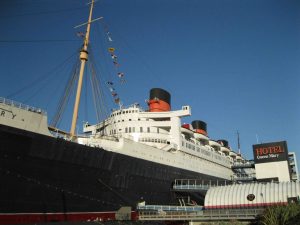 LONG BEACH, Calif. [September 5, 2019] – The iconic R.M.S. Queen Mary will commemorate the 85th Jubilee Anniversary of her historic launch which took place on September 26,1934 in Clydebank, Scotland. Christened at the John Brown Shipyard, King George V and Queen Mary launched the magnificent ship into the water before a crowd of more than 250,000 spectators.

Constructed by Shipbuilder John Brown & Co. her sheer scale was an impressive feat. More than 10 million rivets were used to construct the colossal ship, with 27 boilers occupying five rooms, seven turbo-generators, and her overall length of 1,019.5 feet made her longer than the Eiffel Tower.

Born during the Great Depression as Hull 534, the Queen Mary later grew into the largest, fastest and most popular ocean liner in the world. Departing on her maiden voyage on May 27, 1936 from Southampton to New York, she was later awarded the Blue Riband in August 1936 – as the fastest ship to cross the Atlantic – with a top speed of 30 knots. The Queen Mary soon became the North Atlantic vessel of choice for dignitaries, celebrities and those embarking on a new life in America.

During World War II, she halted passenger service to serve as the Allies’ largest and fastest troop carrier. The Queen Mary later reclaimed her place as a world-class ocean liner completing more than 1,000 transatlantic voyages before retiring to Long Beach on December 9, 1967.

“The Queen Mary holds such true, historical significance. Every inch of the ship holds a lifetime of experiences,” said Everette Hoard, Commodore of the Queen Mary. “She became a maritime icon the moment she launched 85 years ago and will continue that legacy for future generations to create their own memories aboard.”

Commemorating the Queen Mary’s esteemed history, creation, and relationship with the Cunard line, the Queen Mary began her 85th Jubilee commemoration with the official dedication of the new Cunard Story exhibit on July 5, 2019. The Cunard Story showcases the Cunard’s remarkable 179-year history, its relationship with The Queen Mary, its founder’s vision, the ships it inspired and continues to bring forward, and their influence on immigration, global maritime policies and technological innovation.

To learn more about the Queen Mary’s history visit, queenmary.com. Admission to the Queen Mary starts at $20 for children (ages 2-11) and $40 for adults (ages 4+). For more information, schedule of activities and to purchase admission tickets or hotel packages visit queenmary.com.

About the Queen Mary

Located in the Port of Long Beach, the Queen Mary, an Urban Commons property, features a rich maritime history, authentic Art Deco décor, and stunning views of the Pacific Ocean and Long Beach city skyline. At the time of her maiden voyage in May of 1936, she was considered the grandest ocean liner ever built. The Queen Mary’s signature restaurants include Sir Winston’s, Chelsea Chowder House, Promenade Café, Observation Bar, as well as, a weekly award-winning Royal Sunday Brunch served in the ship’s Grand Salon. History buffs enjoy the ship’s museum with various daily tours, and currently the ship is featuring their newest exhibition, Their Finest Hours: Winston Churchill and the Queen Mary. The Queen Mary features 35,000 square feet of event space in 13 remarkable Art Deco salons as well as a tri-level, 45,000-square- foot Exhibit Hall. The Queen Mary boasts 347 staterooms including nine suites. For more information or for reservations, visit www.queenmary.com or call (800) 437-2934. The Queen Mary is located at 1126 Queens Highway in Long Beach.

Urban Commons is a Los Angeles-based real estate investment and development firm with a successful track record of developing, repositioning and rebranding assets throughout the United States. The company focuses on improving under-managed and under-utilized assets by developing innovative solutions that promote optimal economic, social and environmental returns. Since founding in 2008, Urban Commons has owned, operated and developed a variety of real estate properties including several dozen hotels, apartments, retail, office, and senior care, throughout the United States including the development of nearly one million square feet of commercial retail space. As of May 2019, Urban Commons is the sponsor of the Eagle Hospitality Trust REIT, a Singapore-based hospitality investor with 18 hotel properties across the U.S.,which Urban Commons operates.  Website: www.urban-commons.com