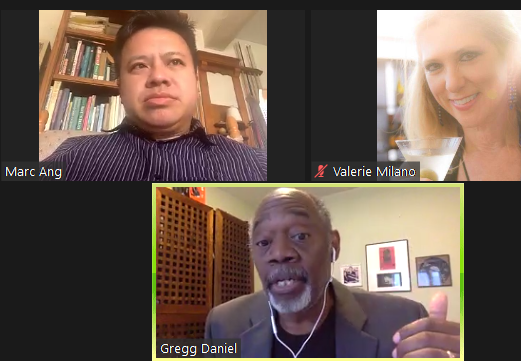 Gregg Daniel is likely not one of the first names you instantly recognize in Hollywood, but a gander at his IMDB will reveal many household names over the years from “Home Improvement”, “Ally McBeal”, “Boston Public”, “Desperate Housewives”, “Weeds”, “Grey’s Anatomy” and most recently, “True Blood” and “Insecure”.

These are just a few household names in TV, which doesn’t even touch upon his many big-screen appearances from “White Men Can’t Jump” in the early 90’s and “Spider Man 3” in 2007, to being a voice for the video game “Grand Theft Auto”. Gregg has over 200 production credits onstage and onscreen, a feat accomplished by few. As he tells The Hollywood Times, Gregg is blessed to have quality work.

Our conversation covered a wide array of topics from his work, the industry as a whole, his dedication to mentorship through his work as a USC professor, his family life, his nonprofit, and the various dimensions of his activism. With a grown daughter, Gregg also reflected on his years balancing his family and career, with the support of loving wife, Verlayn and their beautiful home in the West Adams district of Los Angeles where Gregg wisely invested 20 years ago.

Gregg is a New York City native and cites the grit and hustle, as well as the concentration of arts, especially in theater, as his favorite aspects of his hometown.  Being exposed to a broad spectrum of arts and experiences and a strong work ethic, Gregg has brought that discipline to build a great career in entertainment. He was last in New York right before pandemic in February 2020, and hopes his urban hometown will weather the impact, which may take years to get back to normal. He is thankful that Broadway shows are back as a first step back to normalcy.

Most importantly, the industry is changing and Gregg sees this, regardless of the COVID pandemic. He feels consumer habits were already gearing towards more pay-per-view and on-demand screening, and movie-going was becoming less due to options at home. The film and television industries were already forced to adapt to streaming, and COVID merely exacerbated the trend of an already-shifting paradigm.

But Gregg is more concerned with the actual content and sees change as a positive. He prides himself in being an advocate for change in diversity, equity and inclusion in Hollywood. We dug deep into this topic, as we both agreed that last year’s incident with George Floyd opened up an important discussion in our society. As a child of the civil rights movement, Gregg is concerned about true solutions when it comes to Hollywood representation of minority stories. I saw distinct parallels, especially for Asians in an industry where the last 30 years has seen a setback of Asian representation, where we are either stereotyped, tokenized, fetishized or simply “invisiblized”. Gregg understood and I could see a man deeply dedicated to correcting this problem pervasive in Hollywood and the hypocrisy of past attempts at inclusion.

Gregg has seen this improve as crew members and decision makers in Hollywood are now more diverse. He is happy to see more women and people of color in these boards but also shares my trepidation in hiring minorities for the sake of hiring, and sees the solution as one where Hollywood does a better job of recruiting and going out to more avenues to find and nurture talent from less obvious places. It is clear Hollywood has typically recruited from low hanging and didn’t care to spend the time to understand and engage with more unique stories. This must change.

This is why Gregg is focused on changing the narratives we create, and calling things out where needed. His nonprofit organization “Lower-Depth Theater” (lower-depth.com) focuses on the underplayed “vast stories from the African diaspora” and the leadership of his team includes an interesting mix of backgrounds including Yvonne Huff Lee, who is of black and Filipina heritage. Last year, during pandemic, Lower-Depth featured ten playwrights with full production from writers, directors to technicians, that worked together to highlight stories from the neighborhood, such as sex trafficking and the lives of “underrepresented people”.

When I asked about Gregg’s favorite play, he cited one that was political in nature, with a sci-fi writer creating an alternate universe where there was a governmental coup and Trump was elected king and instituted slavery. Interestingly, he believed this was not far from the realm of possibility, which showed how much in line Gregg is with the politics of Hollywood. I asked about how his art and projects would be perceived by those from a different perspective, such as half the country who actually supported the previous president, but Gregg was strong in his assertion that he wanted stories and activism from the left side of the spectrum and actually has a goal for moving his audiences to activism, even giving them a “how-to” guide and tools after each play.

My own activism has overlapped with Gregg’s, around human trafficking awareness, especially in using film, Trafficked, directed by my friend Conroy Kanter and starring Ashley Judd, as my “instructional” vehicle of sorts to move audiences. Gregg and I had this in common, as he said, “If we open someone’s heart, not just their head, then you got them.” I agree. We must move hearts before we can move minds. He did this with Tira Palmquist’s Safe Harbor, a Lower-Depth Theater production two years ago. Gregg had highly successful “talkbacks”, which were panel discussions after the play, involving the audience. The parallels were refreshing as I was reminded of the panels I did after screenings of the Trafficked movie involving law enforcement, psychologists, actors from the film and nonprofit professionals dedicated to rehabilitating the survivors. The philosophy was the same: present a piece of art and allow people to discuss afterwards.

There was some great recent news in Gregg Daniel’s home: the addition of Woody, a golden retriever, adopted from Korea, who traveled 5,000 miles to LAX just a week ago. Gregg’s love for animals shined through as he encouraged ways for animal lovers to get involved: helping to foster (this is how I ended up with my puggle, Pugsley (IG: @pugsley.love), through Malibu Freedom Dog Rescue), writing a check to organizations such as the Joey and Bailey Foundation, who helped connect Gregg with Woody, or simply getting involved in health promoting activities like walking other people’s dogs. Gregg is also a big fan of specific breed rescues, and encourages us to adopt, not shop.

In his spare time, Gregg values his family time, especially with his wife, Veralyn. He believes a strong family unit needs a foundation of finding the right partner. This is where cooperation and flexibility are needed and he believes that Veralyn being an actress helped greatly. In Gregg’s case, he was able to spend a lot of time with his baby daughter in her early years, with the flexibility of being an actor. Gregg says that being a father and husband anchored him, “I’m a better director because I’m a family man”.

This care and mentorship extends to his work in the USC dramatic arts department as he nurtures a young generation that is ardent about becoming performers. I can imagine just how fun his classes would be, not only by his animated demeanor but his warmth and connectedness. Gregg expressed respect and admiration for the young and the green to the craft, citing vulnerable places that he could access when training, that are lost in time when one becomes seasoned.

The Hollywood Times was first to hear about Gregg’s upcoming plans. He is off to New Mexico soon to film a movie called Impossible, where he is excited to travel to for a desert feature on a morbidly obese black man who is on a path to lose weight after a Type 2 diabetes diagnosis. Gregg will play a coach that will work with this man. He is also working with Stephen Sachs on play at USC, based on Alabama in 1964. Gregg will be doing a play on a digital stage and a solo performance piece, which will be a first.