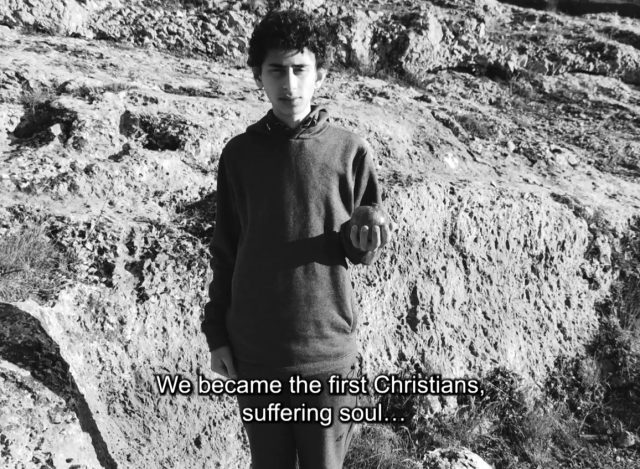 Among the documentary films offered for viewing in a virtual format at this year’s Los Angeles Greek Film Festival is Thomas Sideris’ The Pomegranates of Nagorno-Karabakh (Greece, 2022). Thomas Sideris is an investigative journalist and director at the Hellenic Broadcasting Corporation and was in Nagorno-Karabakh to witness the 2020 war between Armenia and Azerbaijan that resulted in the defeat of Armenia and Azerbaijan regaining control over its occupied territories.

Before the 2020 war, there was no physical border between Armenia and the Armenian occupied districts of Azerbaijan, and some Armenian villages were expanding into Azerbaijan’s territory, while some water sources and pastures were on Azerbaijani soil. Prior to the 2020 Nagorno-Karabakh war, 4 districts of Azerbaijan on the Armenia-Azerbaijan border were occupied by Artsakh ethnic forces. It is a complicated story and Sideris’ film attempts to capture salient images from the perspectives of both Armenians and Azerbaijanis. The film is available online through May 22 as part of the Los Angeles Greek Film Festival virtual screenings at:  https://www.lagff.org/portfolio-item/the-pomegranates-of-nagorno-karabakh/

Sideris opens his film as a film essay focused on pomegranates which are grown in both Armenia and Azerbaijan. Clearly, Sideris is referencing Sergei Parajanov’s The Color of Pomegranates (1969), the biopic of Armenian poet Sayat Nova, told in non-narrative images. For Armenians, the pomegranate is one of the most recognizable symbols of the country. In Armenian mythology it symbolizes fertility and good fortune. It was a guardian against the evil eye. At weddings in Western Armenia, a bride would throw a pomegranate and break it into pieces. In Azerbaijan, the rich symbolism of pomegranates (called nar in Azerbaijani) has elevated them to the status of king of fruits. As a symbol of love and fertility, many songs and poems have been dedicated to it, and its form can often be seen replicated on carpet patterns and wall hangings. Pressing this imagery to the limits, each segment of this 12-part film has pomegranates to mark the transitions.

With 12 chapters and an epilogue, Sideris gives his documentary the shape of an essay about the conflict between the two nations. Chapter 1, entitled “Orchard with Pomegranates” shows Azerbaijani soldiers playing soccer in the early autumn in Karakent, Azerbaijan. Then we visited Nor-Maraga, in Armenian territory of Nagorno-Karabakh, where a proud farmer with a young pomegranate orchard says that “we’re not leaving. I’m coming back. I’m not taking anything. I’m not destroying anything.” His is one of disparate views we will hear expressed in the course of the documentary. This is the context of the film, as we realize that the war in 2020 has just ended and many Armenian families have been told to pack up and return to Armenia proper. Russian peace-keepers are there to enforce the truce between the two sides in the conflict.

Next, we stop by Askeran, Azerbaijan, where we see the Azerbaijani town and its mosque largely destroyed – by Armenian firepower during the conflict. The local farmers are processing grain and an Azerbaijani farmer talks about his pomegranates. In Hardut, an Armenian village near the Iranian border where we see lots of damage from the war, an Armenian farmer is not certain it his land is not in Azerbaijani territory. This establishes the pattern of the film, as each chapter attempts to provide voices and images from the perspective of both local Armenians and local Azerbaijanis.

Moving into Chapter 2 entitled “The Grey Stone,” we hear from Hakob Arshakyan, head of Shurnukh village. An Armenian farmer says with some irony that half of his barn is now in Azerbaijan. From his barn, he can see the nearby Azeribaijani camp and also the Russian peace-keepers in Surnuxu. Stefan Movsisyan is a farmer in the same village, but the new lines of demarcation have left him without his house and he is staying with an Armenian family elsewhere.

The theme of displacement looms large in the next section of the documentary film. In Berd Zor, in Chapter 3, “The Smoke,” we see Armenian farmers burning their houses before leaving their villages. As we see in Chapter 4, “Homes,” many Armenians are packing up their belongings with the help of Armenian soldiers and having no idea where they will go next. In Karakent, Azerbaijan, an Azerbaijani woman is out feeding her chickens and later she confides that she has one grandson dead, one in the hospital and uncertain about the whereabouts of the third. Her husband Khoirk Grigoryan says “I am not satisfied with the outcome of the war.”

Chapter 5, “The Remains” returns us to the Armenians who are burning their houses before leaving in the village of Nor-Karmirovan. One Armenian resident says “If it is not mine, it will belong to no one.” Yet another man says he does not want to leave. He had been displaced once before back in 1994 from Karmiovan in the Martaraket region. He explains that he has just built his third house and is again unlucky. Yet other people are seen loading trucks with all the building materials that can remove from their homes.

The remainder of the films, in Chapters 6 -10, we focus on the soldiers in both the Armenian and Azerbaijani sides. Perhaps it was easier for the director to capture images of the Armenian soldiers and some even shared their own cell-phone images with him. The videos of the Azerbaijani soldiers look more “official” from a government point-of-view but do attempt to provide a balance perspective on the challenges of fighting in the mountains of Nogorno-Karabakh. We see Armenian soldiers killing a sheep and cooking it; images of damaged houses; and men searching for dead bodies in the debris of ruined buildings. There is a remarkable scene of local Armenians inside a bare Armenian church filled with candles, praying for the deceased. This is followed by a video of Azerbaijani soldiers with mine detectors looking for mines along the road.

What about the actual front in the war? Sideris provides us with still photographs and his own videos in Chapter 9, “The Cigarettes,” where it is no secret that Armenian men smoke far too much. We see a group of very chummy Armenian soldiers at a night camp, singing about their homeland. An Armenian soldier talks about the Azerbaijani drones that kill local citizens at night. In Chapter 10, “Dead Bodies,” we observe the burial of a fallen Armenian soldier and weeping Armenian mourners. This is followed by Armenians exhuming an old grave from the cemetery to take back to Armenia proper with them because they don’t wish to forget their ancestors. We see footage of official memorial ceremonies for the fallen soldiers in Yerevan and in Baku, with their respective leaders participating. Not all the Armenians are planning to leave the Azerbaijani re-occupied parts of Nagorno-Karabakh. In one mountain village, the tough mountain dwellers are determined to stay and make the best of things.

In Chapter 12, “The Trauma,” we meet injured soldiers – both Armenian and Azerbaijani, who feel fortunate to still be alive but miss their dead comrades in arms. An Armenian psychologist who works with injured veterans in Yerevan explains: “From a psychological perspective, there are no victors in a war. Those who fight in a war are defeated on both sides.”  We see injured soldiers and in the “Epilogue” of the film, we stop by a badly-damaged Armenian hospital clinic, where a warplane dropped rocket and cluster bombs, killing and injuring many.

The actual lines of demarcation between Armenian regions and Azerbaijani regions in Nagorno-Karabakh were being determined at the time the film was shot. We hear a woman and a man talk about being displaced from their homes. But one woman is excited to learn that her village will remain in Armenian control and she plans to return to her village. A local leader in an Azerbaijani region scratches his head about why so many Armenians chose to destroy the forests and the roads. The region of Lachin, which is on the main highway to Yerevan through the mountains, will stay in Armenian hands and many of its local Armenian residents plan to continue living there.

The structure of the film with its chapters is not all that important. But what impresses more is the director’s attempt to capture perspectives of both sides in the war and the aftermath of the conflict in human terms. The war ended in a ceasefire and 4 districts of Nagorno-Karabakh were returned to Azerbaijan, including the major city of Stepanakert. The fate of this mountainous land-locked region between Armenia and Azerbaijan has been settled for now with Russian peace-keepers there and the acceptance of this status quo by the Armenian government in Yerevan. The history of this region tucked between the two former Soviet republics bordering Iran is complex. In some ways, its people have more in common that they care to admit – as the recurring images of pomegranates through the film remind us.