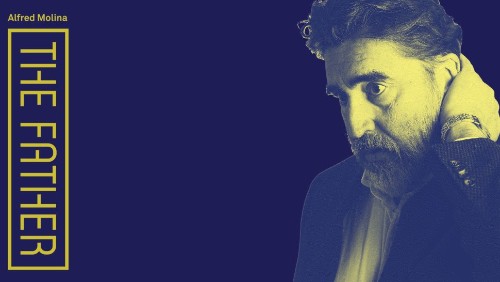 Alfred Molina and his supporting cast come together to render a tragic, yet bravely defiant investigation into the fractured memories of a good man who has dementia.

Do not go gentle into that good night,
Old age should burn and rave at close of day;
Rage, rage against the dying of the light.
— Dylan Thomas

In The Father, a resonant drama written by French playwright Florian Zeller and translated by Christopher Hampton, actor Alfred Molina captures center stage as he fights and struggles with the devastation of dementia. Playing the cultured and sophisticated André, Molina’s character takes the words of Dylan Thomas to heart. Indeed, in denial and not willing to face an unforgiving truth, André rages against the dying of the light.

In the context of the storyline, André is not fighting to stay alive, but rather battling against the obliteration of identity. As memories are lost and his present-day reality breaks up, André desperately argues for normality, never wanting to accept the actual impact of what is happening to him. He cannot come to terms with, or, at times, even recall the truth that he is losing hold of, day in and day out, the very fabric of his character.

Indeed, as his fractured personality gives way to an onslaught of disorientation, director Jessica Kubzansky makes brave and definitive choices that covey the brutal siege. The play’s intended choppiness is explicitly designed to bring the horror of André’s descent to the fore, placing the audience in his head and at the heart of the maelstrom. Highlighting this intention, stark blackouts between scenes are punctuated by loud, jarring, and almost painful music cues.

In these moments of transition, there is no time for a breath and there is no escape from the suffering of this poor soul. Thus, the audience’s very definition of reality is challenged throughout the play as we try like André to hold on to what we know is real. Yet, in the storm of this disease, there is no certainty. Perhaps the greatest achievement of Kubzansky and her cast is placing the audience so deftly in the eye of that storm.

As the story evolves and André gets worse, Jessica Kubzansky finds powerful and uncomfortable ways to convey the nature of André’s decline. Throughout the play, the set of an elegant Parisian apartment deteriorates to reflect André’s confusion and loss. Colors and objects disappear slowly at first, then more rapidly as the loss becomes more profound. Thus, the director and scenic designer David Meyer come together in their artistry to provide a bevy of visual cues to bolster the playwright’s words and highlight André’s heartbreaking loss.

Although Alfred Molina’s intense presence feels like a tornado consuming the stage, it is well-supported by moving, detailed performances by the rest of the ensemble cast. As André’s daughter Anne, Sue Cremin expresses a perfect balance of love and exhaustion. She wants to keep her father stable and happy, but she also knows deep down inside that she is no match for this disease. Dementia refuses to give her a break. Hence, there are times when you want to hug and comfort her, knowing there are no words of sufficient consolation.

As André’s new live-in caregiver Laura, Pia Shaw offers moments of reprieve with a light touch and the relief of of humor. Her smile is infectious, and you almost believe that perhaps she has the skills to make everything okay. However, in the face of dementia’s onslaught, you realize there is no magic, despite the determined love of Anne and the playful levity of Laura. Indeed, there is nothing that a human being can do to stop the inevitable descent.

Although the other men in the cast (Michael Manuel and Robert Mammana) are excellent, it would be a mistake not to point out the stirring performance of Lisa Renee Pitts as Woman. Alongside other parts, she plays a nurse who cares for André when he is most vulnerable. Her compassion is expressed in both her words and posture as she empathizes with his plight. More than anything, she wants to bring comfort to a man broken and overwhelmed.

As André ultimately realizes, he is a tree that has lost his leaves, his branches, his bark, and even his forest. Like Shel Silverstein’s The Giving Tree, he has nothing left in the end to give. Reduced to an almost infantile state, he longs for the warmth of his mother’s breast. His nurse tries to comfort him, letting him know that “You’ll be alright in a moment,” but her words feel like a plea of desperate hope. In this final battle, there is nothing but the end looming, and André will be ravaged always by a disease that is so unforgiving.

There is no reason why André should be forsaken. It comes across in Molina’s performance that he is and always has been a good man. However, goodness has nothing to do with it. This horrid reality is the tragedy of the play. In the end, dementia takes no prisoners.

After the show, in a question and answer session with the audience, Alfred Molina spoke about how the extremity of the play brought the cast together, creating a support system of compassion and sensitivity. Rather than being unexpected, he said how friends had told him that the cast in performances of The Father in New York and London had had the same experience. The heartbreaking poignancy of André’s plight is a rallying point where actors come to realize the beauty and fragility of being human.

Ultimately, The Father gives us profound insight into what is most important in the brief flicker of a human life. When asked what they do to recover from such intense and sorrowful performances, Lisa Renee Pitts captured the feeling exquisitely. She said that after the play, when she is driving home, she reminds herself to connect with her loved ones. Lisa Renee Pitts says, “I call my parents, my brother, and my sister even more, just to say thank you and tell them how much I love them. This show has brought out so much gratitude. It makes me so grateful for the rare, precious gifts of being healthy and alive.”

Doesn’t everything die at last, and too soon?

Tell me, what is it you plan to do

with your one wild and precious life?

The Father runs through March 1, 2020. Tickets start at $25 at pasadenaplayhouse.org by phone at 626-356-7529, and at the box office at 39 South El Molino Avenue, Pasadena, CA 91101. The movie version of the play, directed by Florian Zeller, premiered at Sundance, starring Anthony Hopkins and Olivia Colman.