“THE O’JAYS:  LIVE IN NEW YORK” PBS SPECIAL TO BEGIN AIRING ON AUGUST 17 FEATURING THE ICONIC GROUP’S WORLDWIDE HITS AND NEW SONGS FROM THEIR FIRST ALBUM IN TWO DECADES TITLED “THE LAST WORD” ON S-CURVE RECORDS/BMG

THE LIVE SPECIAL WILL BE RELEASED DIGITALLY AND ON DEMAND ON SEPTEMBER 6;  AND WILL BE AVAILABLE ON DVD AND CD DURING PBS PLEDGE DRIVES

THE ROCK AND ROLL HALL OF FAMERS ALSO SCHEDULED FOR “AN EVENING WITH” AT THE GRAMMY MUSEUM IN LOS ANGELES ON AUGUST 29;  TO BE INDUCTED INTO THE PHILADELPHIA MUSIC WALK OF FAME ON OCTOBER 22

Los Angeles, CA (August 15, 2019)—Legendary Rock And Roll Hall of Fame inductees, The O’Jays, will release their new PBS Special nationwide beginning this Saturday, August 17, running through September 1 (check local listings).  The special, titled The O’ Jays:  Live In New York, will also be released digitally on September 7 via S-Curve Records/BMG;  the DVD and CD of the concert will be available during PBS pledge drives.  Additionally, The GRAMMY® Museum will host a special evening with The O’Jays — Eddie Levert Sr., Walter Williams Sr. and Eric Nolan Grant — at the museum’s Clive Davis Theater, on August 29 hosted by Scott Goldman, Executive Director of the GRAMMY® Museum; and the group will be inducted into the Philadelphia Music Walk of Fame in a special ceremony held on October 22. 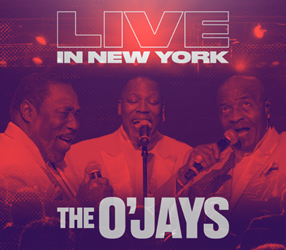 The O’Jays:  Live in New York, was recorded on March 30, 2019, and features the R&B super group at the historic St. George Theatre in Staten Island, New York, performing worldwide O’Jays hits from Love Train to For the Love of Money, Usa ta Be My Girl, Backstabbers, and more;  in addition to brand new songs from their first studio album in almost 20 years titled THE LAST WORD, with stand-out singles Above The Law and Stand Up (Show Love).

Message Medley bonus track: Message In Our Music, Sunshine, Lovin’ You, Survival, 992 Arguments, You Got The Hooks In Me, Brandy, Now That We Found Love and It’s Time To Get Down.

On The O’Jays’ recently released new album on S-Curve Records/BMG – THE LAST WORD – the group continues to take on social injustice with a message of love, as it provides a critical look at the precarious state of social and criminal justice in America.  As elder statesmen, the group has experienced much throughout their lives, from the civil rights movement, to the rising economic inequality, and the erosion of democratic norms.  On the album, they are sharing their perspective on the state of the country, as well as the world; offering up some words of wisdom for the next generation before exiting the stage.

A nine-track album, THE LAST WORD was produced by  GRAMMY® nominated producers Steve Greenberg, Mike Mangini and R&B legend Betty Wright (the trio behind Joss Stone’s “Soul Sessions”), along with the songwriter and rock/pop mastermind Sam Hollander (Panic! At the Disco, Weezer, Neon Trees).  The album includes singles such as Above The Law, Stand Up (Show Love), and the Bruno Mars and Patrick Monahan penned Enjoy Yourself.

With a remarkable career that has spanned six decades, The O’Jays are an indelible part of pop culture, and remain one of today’s seminal music acts.  Original and founding members Eddie Levert Sr. and Walter Williams Sr., who met in their youth and have been lifelong friends as well as bandmates; and Eric Nolan Grant, who joined the group in 1995, continue to thrill fans today.  Throughout their career, The O’Jays have achieved 10 Gold albums, nine Platinum albums and 10 #1 hits;  and were inducted into the Rock And Roll Hall of Fame in 2005.  They were also inducted into the Vocal Group Hall of Fame in 2005, and were honored with BET’s Lifetime Achievement Award in 2009.  In 2013, they were inducted into The Official R&B Music Hall of Fame.

CLICK HERE TO LISTEN TO THE O’JAYS’ THE LAST WORD;  IMAGES ARE HERE

FOR THE LATEST ABOUT THE O’JAYS, VISIT: