THE NOVICE COMING TO THEATERS AND EVERYWHERE YOU RENT MOVIES
https://www.ifcfilms.com/films/THE-NOVICE

#THENOVICE If you enjoyed the relentless nature of Black Swan and that Whiplash, you will find The Novice fits squarely in the middle of these hyper-intense character studies. The Novice follows Alex Dall (Isabelle Fuhrman – Best Actress winner at Tribeca Film Festival), a queer female collegiate rower whose struggle with being a perfectionist goes from being a positive attribute to a cry for help. Over the course of a few months, her dangerously obsessive pursuit to attain straight A’s and stand out on her school’s crew team affects her mental health, physical health, and relationships with peers and love interests alike. Alex doesn’t care who she offends on the way up, as long as she is moving up. The Novice shares narrative and cinematic similarities to films like Damien Chazelle’s Whiplash (which Hadaway worked on as sound editor) and Darren Aronofsky’s Black Swan. All are films about solitary people with few meaningful connections, consumed by their respective passions.

The Novice is Lauren Hadaway’s directorial debut, but the former competitive rower didn’t need years of filmmaking experience to successfully bring the rarely-seen portrayal of women’s crew to the big screen. What’s even more impressive are the dual storylines that are equally fraught with increasing psychosis. Not only is Alex developing nasty open wounds on her palms from the incessant rowing, but she is also stumbling through a relationship with her Physics teacher’s assistant, Dani (Dilone). When interviewed, Hadaway added: “The film is based on my years as a collegiate rower, and as much as I love rowing the thing is that it’s not inherently cinematic. It’s people going backward. It’s really smooth. It looks calm. The challenge creatively was how do you put someone in the headspace of the character’s experience, that obsession, and grit? For me, the answer was all of those things you just said. It’s really creating a cinematic experience with sound, with image, song choices, and stylistic pieces. It’s a sports film, but it’s also not a sports film.”

What is Hadaway’s The Novice really about? Again, Hadaway explains that it is “about a girl falling in love or a girl obsessing over something and getting lost in the moment. I hope though that the audience can also be transported into that headspace and really understand that even if they don’t know a thing about rowing.” Hadaway leads us through the world as Alex Dall sees it –  as a collection of challenges to conquer, with people mainly serving as opposition. When she trains on her rowing machine at practice, everyone around her falls away in her mind and on the screen. At first, her experiences rowing seems euphoric, filled with romantic, dreamy music. Then, slowly, the act of rowing curdles into something monstrous. This is not a feel-good sports film. This is a film about an all-consuming, unhealthy fixation on suffering.

Dall is a college freshman determined to make varsity on her rowing team. In the meantime, she excels as a novice despite not being particularly skilled on the water. Dall compensates for this by embracing strategy, turning the sport into a shifting equation that keeps getting longer. She’s not good in Physics either, but that doesn’t stop her from majoring in it. When she isn’t obsessing over rowing, she’s obsessing over improving her mediocre grades in the class.

That’s where she meets a sexy teacher’s assistant named Dani (Dilone) who is everything that Dall isn’t – relaxed, funny and secure in herself. The two women have great chemistry and their scenes together are among the most playful in the film. For a moment, it seems like Alex might learn how to relax. But despite her lover’s best efforts, Dall continues to toil as her health, grades, and social skills deteriorate. Aside from her partner, Dall’s sole friend is Jamie (Amy Forsyth), the only person on the rowing team who likes her. But the moment she gets an opportunity to best Jamie, she chooses her ambition. Dall can’t seem to help to be calculating, even as she fails time and time again, alienating everyone around her. 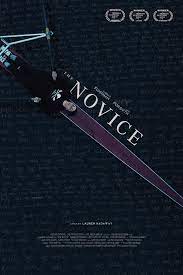 As a character study, The Novice is a fascinating film. Director Hadaway was interested in the difference between men and women and how they are portrayed in these kinds of highly competitive action movies. As she sees it: “Men destroy outwards, they punch walls in front of people, they destroy things, they let their rage out in an externalized way. From my experience of being a woman and being around women in this environment, I think we turn inwards when we hit these hard moments, and you really see Alex start to crumble from the inside out here. I think that can often be more interesting.”

Lauren Hadaway is a 2018 Outfest Screenwriting Lab Fellow. Born and raised in Texas, she recently relocated to Paris from Los Angeles.THE NOVICE

Advertisement
COMING TO THEATERS AND EVERYWHERE YOU RENT MOVIES
https://www.ifcfilms.com/films/THE-NOVICE