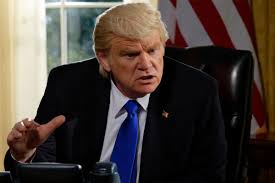 The Comey Rule on Showtime

Los Angeles, CA (The Hollywood Times) 9/29/20 – The night before the debate, one month prior to the Presidential election and in the three-year wake of the Trump Horror Picture Show; Showtime has dropped The Comey Rule starring Jeff Daniels as embattled former FBI director James Comey. The script itself is based on Comey’s meticulously annotated memoirs. The Comey Rule is a two-parter. Monday (night one) is the setup that covers the period between Hillary Clinton’s Email flap and Election Night. We see the insulated institutions of Government running on cruise control, following carefully honed protocols that they assume will insure against the unthinkable, until the unthinkable happens and Trump is elected.

Forget all the lukewarm reviews you may have read; The Comey Rule is a barn burner that starts off on a slow boil. Night one serves to educate us and establish main characters in the Federal intelligence and law enforcement communities; the underpaid public servants tasked with keeping the citizenry safe and the President looped in. Trump only appears as a shadowy entity, not yet a reality, but whose stench of hate and corruption precedes him like the distant thunderclaps of an oncoming storm. Night two, Trump arrives. Godzilla rises from the depths of Tokyo Bay and all hell breaks loose at the speed of light.

Writer Producer Director Billy Ray has a way with characterization and dialogue. He brings the stilted culture of old school D.C. to life, and clearly never met a film genre he didn’t like. Ray artfully merges Documentary, Spy Thriller, and horror movie threads into a political drama for the ages.

The casting is remarkable as well, great care was obviously taken to cast actors with some physical resemblance to their real-life characters. Additionally, the show’s narrative is artfully co-mingled with actual news footage carefully woven into the timeline chronology; resulting in real-life news reporters and pundits becoming (in essence) integrated cast members.

That brings us to Trump.  Brenden Gleeson’s portrayal of Trump cranks the art of Trump mimicry to a whole different level. Writer/Director Billy Ray eschews common Hollywood practice of glamming up real-life characters to appear as more attractive versions of themselves. Gleeson and Ray scoop out the malice and ugliness embedded in Trump’s soul and slap it directly on his face. Trump becomes the swamp monster in the sci-fi flick whose every moment on screen makes you dig your fingernails deeper into your viewing companions’ shoulder. Real-life Comey felt those sensations in his interactions with the President. Indeed, the former FBI director himself declared the loyalty dinner scene (where Trump goes full mafia Don) almost unbearable to watch.

Jeff Daniels and the ensemble cast make this engine rev. Considering the culture of the FBI and Justice Department is built on a mirthless, monotoned “Just the facts ma’am” bedrock, the actors still manage to imbue their characters with sizzle. Michael Kelly (as Andrew McCabe) is a tightly wound ball of laser-focused energy. Daniels’ Comey is a clinic on the ‘less is more’ school of acting. Jonathan Banks IS James Clapper, and Holly Hunter plays Sally Yates better than Yates plays herself.

In our current bizzaro world of Fox News, Deepfake videos, and rogue punditry, the dramatization of the facts behind Russia’s hostile takeover of America will go unappreciated by the 40% of Americans who have already swilled the Kool-Aid and are lining up for a refill. But facts remain. Comey was there. He was a good guy. A rock-ribbed, lifelong Republican to boot. He took down Hillary and felt bad about it, but he would do it again because the rules and regs demanded it.  Now he’s in the bell tower trying to warn the village. Let’s hope enough villagers listen.